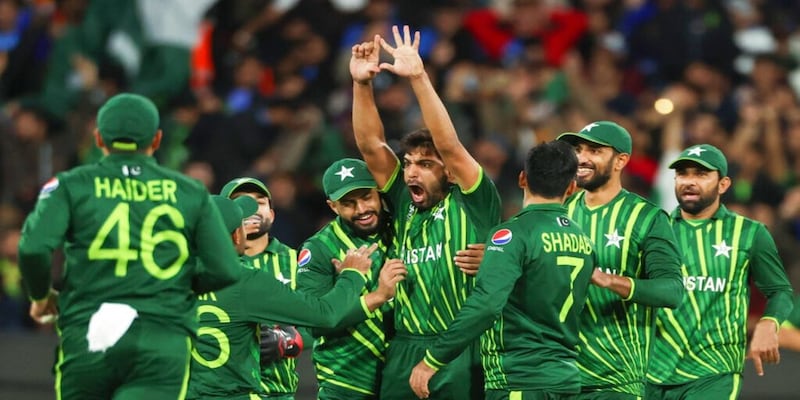 After a heartbreaking loss in their first Super 12 match against India, Pakistan would like to regroup and get back to winning ways against Zimbabwe in the 24th match of the T20 World Cup 2022 at Perth on Thursday, October 27. For Zimbabwe, the match against Pakistan in an opportunity to add to the list of upsets that the ongoing ICC T20 World Cup 2022 has already experienced.

It was a heartbreak for Pakistan in their ICC T20 World Cup 2022 tournament opener against India in Melbourne on Sunday as they lost a last-ball thriller by 4 wickets.

The Men in Green would like to regroup and put their campaign back on track as they face Zimbabwe in Match 24 of the T20 World Cup 2022 in Perth on Thursday.
For the most part of India’s run chase, Pakistan had it in control and would be anguished to lose out on the two points there were for the taking. But this Pakistani side is not one that will get bogged down after a gutting loss. There were so many positives from the game against India. Their never-say-die spirit while batting after their star batters Babar Azam and Mohammad Rizwan got out cheaply. Shan Masood and Iftikhar Ahmed showed that this Pakistan team is not a team that will go down without a fight. With the ball, Haris Rauf was brilliant till that last over when he was hit for two consecutive sixes by Virat Kohli on the final deliveries of his spell. Even Naseem Shah and Shadab Khan were impressive. Shaheen Shah Afridi looked rusty coming in after an injury. But playing against a lesser opponent will help him get into the groove. Pakistan might bring in an extra pacer after the MCG debacle.
Also Read |
Following his knock against Pakistan, Virat Kohli now at no.9 in the latest ICC T20I rankings for batsmen
Zimbabwe were gutted too after their match against South Africa went on despite rain but would be happy to take one point from the washout. They would fancy their chances against a side they have defeated twice in white-ball cricket in the last two years. This T20 World Cup has had its own share of upsets.  The latest in the line of shock wins of the ongoing ICC event in Australia is Ireland's win over England.  But to pull off a win over Pakistan, Zimbabwe can’t solely rely on Sikandar Raza as Pakistan’s pace attack is even more threatening than that of South Africa. The senior pros in Craig Ervine and Sean Williams need to up the ante. Zimbabwe might be forced to make changes in their XI as Richard Ngarava was injured in the last match. Brad Evans might replace him. Blessing Muzarabani would lead their pace attack along with Tendai Chatara.
Also Read | India vs Netherlands, T20 World Cup Super 12 Match: Preview, betting odds, fantasy picks and where to watch live
The way the tournament has turned out to be so far, it looks to be another exciting contest.
Form Guide (last five matches)
Pakistan: L-W-W-L-W
Zimbabwe: NR-W-L-W-W
Pakistan vs Zimbabwe (Head to Head)
Matches played: 17
Pakistan: 16
Zimbabwe: 1
Pitch
The Perth pitch has a lot of pace and bounce for the fast bowlers. If batters can apply themselves, they can also score quickly.
Weather conditions
It will be partly cloudy in Perth but no rain. The temperatures will hover between 22° C to 11° C.
Possible XIs
Pakistan possible XI
Babar Azam (C), Mohammad Rizwan (WK), Shan Masood, Iftikhar Ahmed, Haider Ali, Shadab Khan, Asif Ali, Mohammad Nawaz, Haris Rauf, Shaheen Shah Afridi, Naseem Shah
Zimbabwe possible XI
Craig Ervine (C), Regis Chakabva (WK), Sean Williams, Sikandar Raza, Wessly Madhevere, Milton Shumba, Ryan Burl, Luke Jongwe, Richard Ngarva/Brad Evans, Tendai Chatara, Blessing Muzarabani
Top Fantasy Pick suggestions
Batters: Shan Masood, Iftikhar Ahmed, Sean Williams
Wicketkeeper: Mohammad Rizwan
All-rounders: Sikandar Raza, Shadab Khan, Ryan Burl
Bowlers: Haris Rauf, Shaheen Shah Afridi, Blessing Muzarabani, Tendai Chatara
Betting Odds (bet365)
Pakistan: 1.10
Zimbabwe: 7.00
Where to watch
The match begins at 4:30 PM IST.  In India, the match will be broadcast on the Star Sports Network. Online viewers can follow the live-action via Disney+Hotstar.
(Edited by : Prakhar Sachdeo)
Check out our in-depth Market Coverage, Business News & get real-time Stock Market Updates on CNBC-TV18. Also, Watch our channels CNBC-TV18, CNBC Awaaz and CNBC Bajar Live on-the-go!