Meet the coaches behind India's stellar show at CWG 2022

Meet the coaches behind India's stellar show at CWG 2022 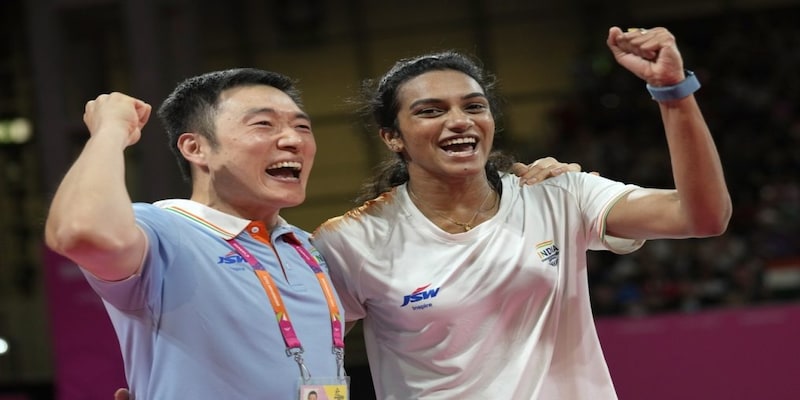 With the Commonwealth Games 2022 drawing to a close and India grabbing the 4th spot, let's turn the spotlight on the anonymous guys behind the Mirabai Chanus and PV Sindhus — their coaches.

After shuttler Lakshya Sen clinched his maiden badminton men’s singles title in the Commonwealth Games 2022 at Birmingham, he shared an image of his coaches hugging each other. “Worth every gold medal in the world. My world,” the 20-year old shuttler wrote on Twitter.

Worth every gold medal in the world. My world. ♥️ #SenMode pic.twitter.com/uBPbsv6YBY

The success of the Indian contingent at the Birmingham Commonwealth Games 2022 brought to the fore the contribution of the coaches, who have been consistently working on the players to bring out the best in them.

India finished fourth in the medals tally at the Commonwealth Games 2022, which ended on August 8. India won a total 61 medals — 22 gold, 16 silver and 23 bronze.

Here’s a look at some of the coaches who steered the players to success:

A 400-metre runner in school, the national weightlifting coach started training in weightlifting when he was in college. He won the senior nationals medal in 1993 in the 85 kg category. Back then, wrestlers trained under a tin shed at Patiala. “We never had AC training halls at national camps like now. The diet was abysmal for a strength sport,” Sharma recently told Indian Express.

Sharma, who has also won the Dronacharya award, later retired only to become a coach for young children. In 2012, he was called to join the India camp as an assistant coach after his team in Uttar Pradesh became the national champions three times in a row. At the national level, Sharma realised that the training routine was the same as the one in the 1990s, when he was a weightlifter. It was then that Sharma worked towards changing the basics, including the diet of the weightlifters. His efforts are now showing results of India at international sporting events.

At the CWG 2022, national women’s wrestling team head coach Jitender Yadav focused on breaking the psychological barriers of seasoned wrestlers Sakshi Malik and Vinesh Phogat to ensure they are able to assert their class again.

“They are world-class wrestlers who had psychological issues. It was a big challenge to bring them out of that,” The Hindu quoted Yadav as saying.

Park Tae-sang is a former South Korean professional badminton player, who won gold for the country in the 2002 Asian Games. He started coaching in 2013 with the South Korean national badminton team and later moved to India, joining the Pullela Gopichand Badminton Academy. It was here that he got the opportunity to work with P.V. Sindhu. As her personal coach, Park Tae-sang has helped her win an Olympic bronze medal in 2020 Tokyo Olympic Games and gold in 2022 Commonwealth Games at Birmingham.

Former Indian cricketer Ramesh Powar has been the head coach of the Indian Women’s Team since 2018. The former cricketer has played two Tests and 31 ODIs for India. As the coach of the Indian Women’s Team he is credited for India qualifying in the semi-final of the ICC T20 Women’s World Cup in 2018 and also winning 14 T20 matches in a row. The India women's cricket team won the silver medal at CWG 2022.

Former Australian field hockey player Graham Reid was appointed the head coach of the Indian national team in 2019. It was under his guidance that the Indian team won the bronze medal at the Tokyo Olympics and the silver at the Commonwealth Games 2022.