Jio Cinema releases viewership numbers for the 2022 FIFA World Cup. JioCinema heralds a new dawn as digital viewership went past TV in India for the first time for a global marquee sports event.

A monumental 32 million viewers tuned in to JioCinema on the final day that delivered arguably the most extraordinary FIFA World Cup Final as Argentina picked the FIFA World Cup Trophy for the first time since 1986.
Over the entire World Cup duration, there were 110 million viewers so 11 crore people actually went ahead and consumed the football on digital content. The cumulative reach for the first 58 matches on television was around 47 million. So assuming that they even doubled that number in the second half digital was far ahead of television itself. 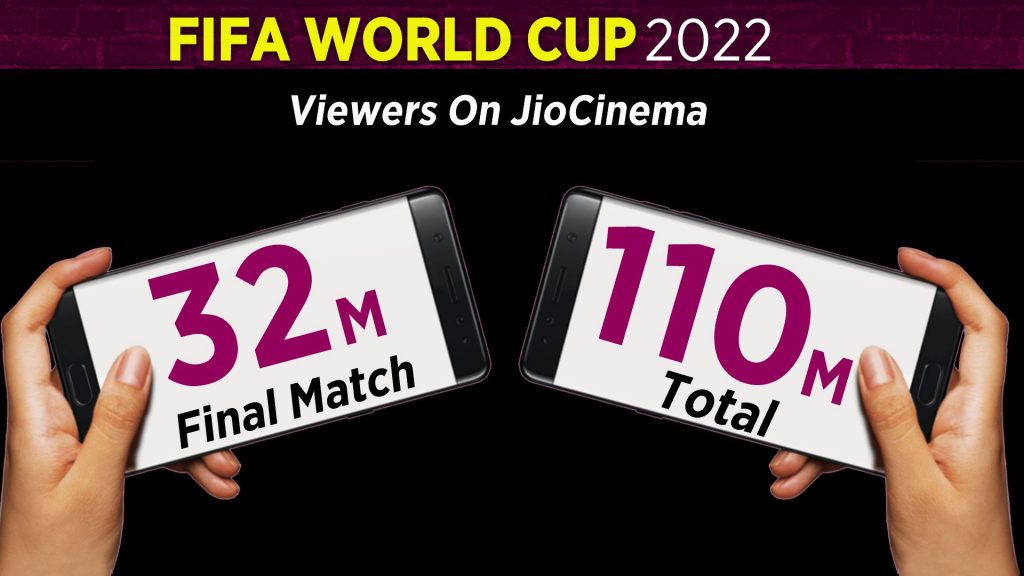 India as a result of this has actually become one of the highest digital viewership markets for FIFA events where it does not even participate. 32 million Indians watching and over 110 million viewers consume the content on digital throughout the World Cup. This means that it is the largest viewership market for an event where India isn’t participating. So that was the other positive that really stood out.
There were over 50 brands across e-commerce, banking, financial services, auto, fashion, hospitality, and fintech, all of them advertised on these platforms throughout the World Cup. There were tweets from global tech leaders highlighting the viewership of the World Cup via the Internet.
The CEO of Alphabet Sundar Pichai tweeted that Google Search recorded its highest-ever traffic in 25 years on the final of the FIFA World Cup.

Search recorded its highest ever traffic in 25 years during the final of #FIFAWorldCup , it was like the entire world was searching about one thing!

The owner of Twitter Elon Musk as well said that 24,400 tweets per second was the frequency at which people were tweeting when France hit that goal itself.

24,400 tweets per second for France’s goal, highest ever for World Cup!