IPL 2022, DC vs KKR Report: Kuldeep Yadav haunts Kolkata Knight Riders for the second time in season with another four-for

IPL 2022, DC vs KKR Report: Kuldeep Yadav haunts Kolkata Knight Riders for the second time in season with another four-for 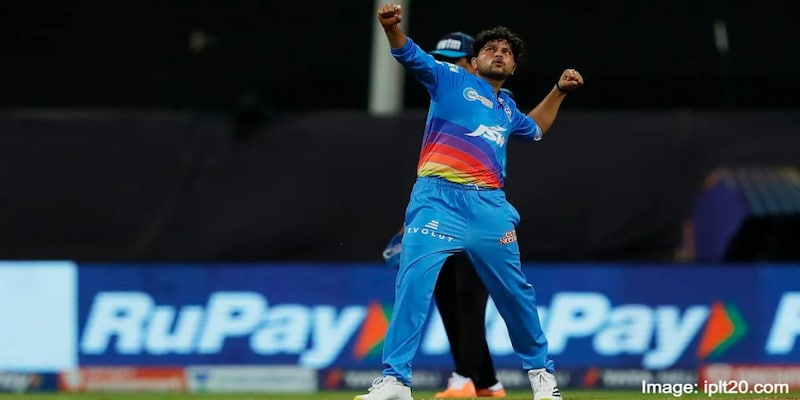 Kuldeep Yadav picked up his second four-wicket haul this season, against the same opposition, to help Delhi Capitals seal a four-wicket win over Kolkata Knight Riders at the Wankhede Stadium.

Delhi Capitals (DC) bounced back in style with a dominant 4-wicket victory over Kolkata Knight Riders (KKR) at the Wankhede Stadium, Mumbai on Thursday, April 28. The defeat means KKR’s have now lost five on the trot in the Indian Premier League (IPL) 2022 season as they continue to struggle to find the right balance.

The win helps DC climb up the IPL 2022 Points Table to now occupy sixth spot while leaving KKR third-from-bottom with just six points from nine games.
Kuldeep Yadav (4/14) put in another Player of the Match performance against his former franchise despite bowling only three overs. However, Nitish Rana (57 off 34 balls) scored a counter attacking half-century to help Kolkata post an average total of 146/9.
KKR picked up wickets in sporadic bursts but it ultimately proved too small a total to defend as David Warner (42 off 26 balls) provided a solid base and Rovman Powell (33 off 16 balls) sealed the win with a massive six against Shreyas Iyer in the penultimate over.
Catch the latest updates from Tata IPL 2022 here
DC’s run-chase started in horrible fashion as Umesh Yadav sent back Prithvi Shaw on the very 1st delivery. Umesh showed excellent reflexes to take a low diving catch after Shaw got a thick leading edge back to the bowler.
Harshit Rana, who was brought in as a replacement for the injured Rasikh Salam, then struck with his 3rd delivery on IPL debut when he sent back Mitchell Marsh (13 off 7 balls) in the 2nd over. Marsh got off to a quick start with a couple of boundaries against Umesh and even a four against Harshit but ended up slicing a full delivery straight to the fielder.
David Warner and Lalit Yadav then joined forces to steady DC with a 65-run partnership off 49 balls. Warner looked exceptionally dangerous as he smacked 8 fours during his stay. However, Umesh was brought back into the attack in the 10th over and sparked a mini batting collapse for DC.
Umesh dismissed Warner (42 off 26 balls) before Sunil Narine trapped Lalit (22) LBW in the very next over. Umesh (3/24) then got Rishabh Pant (2) caught behind in the 12th over as DC were reduced to 84/5, losing 3 wickets in the span of just 11 deliveries.
However, Axar Patel walked out and scored a quick 24 off 17 balls before he was Run Out in the 15th over. Axar then handed over responsibility to Powell who hammered an unbeaten 33 off just 16 balls to seal victory with six balls to spare.
Earlier at the Toss, Rishabh Pant opted to bowl as Delhi made two changes. Mitchell Marsh returned after recovering from Covid and Chetan Sakariya came in to replace Khaleel Ahmed who pulled his hamstring. Kolkata meanwhile made three changes with Aaron Finch, Harshit Rana and Baba Indrajith coming in.
The changes worked for DC as Sakariya struck with his third delivery when he castled Finch (3) in just the 2nd over. Axar Patel then entered the attack and got rid of the other opener as Venkatesh Iyer (6) walked back in the 5th over.
Things took a turn for the worse for KKR when their former player Kuldeep Yadav entered the attack in the 8th over. Kuldeep got rid of Indrajith (6) with his second delivery and then made it two-in-two when he trapped Narine (0) with the very next ball to reduce KKR to 35/4.
Shreyas Iyer showed some fight but it was Kuldeep who returned to the attack in the 14th over and got the breakthrough. Kuldeep started with a googly on the 1st ball and Iyer (42 off 37 balls) got a thick bottom-edge which Pant did excellently to collect despite very little time to react.
Just as he had done in his first over, Kuldeep followed that up by sending back another West Indies player on a duck as the dangerous Andre Russell (0) charged out on the 4th ball only to be beaten by the flight. Pant fumbled on the take but the ball still fell onto the stumps with Russell well short as KKR crashed to 83/6.
Oddly, Pant didn’t use Kuldeep again in the attack as the former Knight Rider finished with 4/14 from his three overs. Posting better figures than the previous game against KKR this season when he finished with 4/35.
A 62-run partnership off just 35 balls between Nitish Rana and Rinku Singh then helped KKR recover. It was Rana who took charge as he smacked Sakariya (1/17) for two fours in the 16th over before hammering Lalit Yadav (0/32) for two sixes in the next over. Rana brought up his fifty off just 30 balls with a six against Shardul Thakur (0/32) in the penultimate over.
Mustafizur (3/18) who was excellent all night for DC, finally ended the partnership with an excellent final over where he conceded just 2 runs while picking 3 wickets. The Fizz first got rid of Rinku (23 off 16 balls) before sending back Rana (57 off 34 balls) and Southee (0) off consecutive balls with KKR posting just 146/9.
Check out our in-depth Market Coverage, Business News & get real-time Stock Market Updates on CNBC-TV18. Also, Watch our channels CNBC-TV18, CNBC Awaaz and CNBC Bajar Live on-the-go!