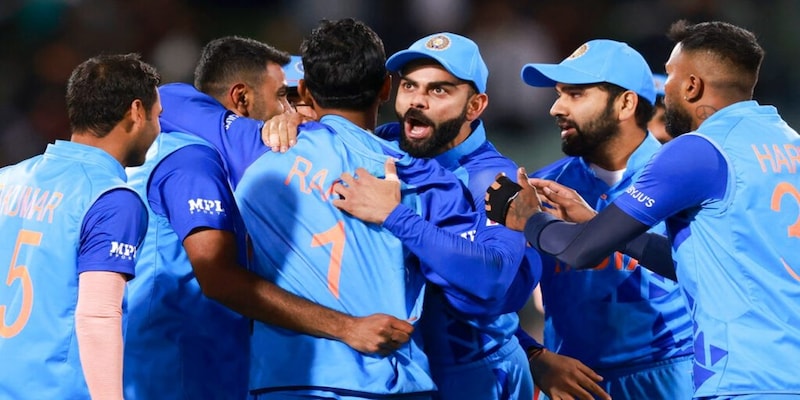 India and Zimbabwe will play the final Group 2 match of the Super 12 stage at the Melbourne Cricket Ground on Sunday. A win for India should take the team through to the semis. The semi-final door is not completely shut on Zimbabwe as yet. Things have to take a bizarre turn on the final day of the Super 12 stage for the African nation to qualify for the next round.

India would be aiming to qualify for the semifinals of the ICC T20 World Cup 2022 when they take on Zimbabwe at the Melbourne Cricket Ground on Sunday in the final Group 2 match of the Super 12 stage of the tournament.  India's chances of qualifying for the semi-finals depend on this match.

How can India qualify for the semi-finals?
India are currently at the top of Group 2 with 6 points from 4 matches and a net run rate of +0.730. A win will see the team through to the semis. Should India lose, then Pakistan have a chance to sneak into the next stage of the tournament, if they manage to beat Bangladesh at the Adelaide Oval. Pakistan are stranded in the third spot in Group 2 with 4 points in 4 games. But Pakistan enjoy a superior net run rate of +1.117.
A loss for India against Zimbabwe and Pakistan's win over Bangladesh would leave India and Pakistan with 6 points each. With two teams finishing on the same points, the net run rate will come into effect. Pakistan's superior net run rate will help the team sail into the semi-final of a T20 World Cup for a second straight year.
Also Read: Celebrating the meteoric rise of Cricket's GOAT Virat Kohli
What Zimbabwe need to do to be in the semis?
The semi-final door is not completely shut on Zimbabwe as yet. Zimbabwe are fifth in Group 1 with 3 points from 4 matches with a net run rate of -0.313. Things have to take a bizarre turn on the final day of the Super 12 stage for the African nation to qualify for the next round.
Firstly, Zimbabwe should hope that the Netherlands beat South Africa at the Adelaide Oval in the day's first match. If South Africa lose to the Netherlands then the Proteas will finish with 5 points from 5 matches.  Then, Zimbabwe should look towards the heavens and pray that the match between Pakistan and Bangladesh is washed out due to rain.  That would leave Pakistan and Bangladesh also with 5 points each from 5 games. And finally, Zimbabwe should give India such a comprehensive thrashing that the team's net run rate becomes better than the net run rate of South Africa and Pakistan. Should the stars align and all the above things happen, then Zimbabwe will catapult to second place in Group 2 and play the semis.
Qualification scenarios aside India head into the final group game on the back of good form. KL Rahul, Rohit Sharma, Virat Kohli, and Suryakumar Yadav Kohli have struck fifties in this World Cup. Kohli leads the pack with three half-centuries followed by Suryakumar who has two half-centuries. Rahul and Rohit have hit one fifty each. Bowling too looks in good shape. Every bowler who has bowled for India in this tournament has picked up at least two wickets. Young left-arm pacer Arshdeep Singh is having a breakthrough tournament after picking 9 wickets, the most for India Down Under. Rohit would hope that one of these players put his hands up to deliver a win against Zimbabwe.
Unlike India, Zimbabwe until now has been a one-man show. Sikandar Raza with his efforts with both the ball and the bat made Zimbabwe believe in this World Cup. The all-rounder has scored 185 runs and picked 9 wickets. Zimbabwe's captain Craig Ervine would be wanting more from other players and the team looks to finish the tournament on a high and if luck favors, achieve the extraordinary as well!
Form Guide (last five matches)
India: W-L-W-W-L
Zimbabwe: L-L-W-NR-W
India vs Zimbabwe Head-to-head in T20Is
Matches played: 7
India wins: 5
Zimbabwe wins: 2
Pitch
The average first innings score at the MCG (from the two completed matches) has 158. The pitch has good bounce and carry in it. The fast bowlers will love bowling on this wicket.
Weather report
Incessant rains in the last week of October forced the last three matches scheduled at the MCG to be washed out without a ball being bowled. According to Accuweather, there will be a couple of showers in the morning, but the evening sees decreasing clouds with the temperature around 15° C.
Probable playing XIs
Zimbabwe's possible playing XI: Wesley Madhevere, Craig Ervine (c), Regis Chakabva (wk), Sean Williams, Sikandar Raza, Milton Shumba, Ryan Burl, Luke Jongwe, Tendai Chatara, Richard Ngarava, Blessing Muzarabani
India's possible playing XI: KL Rahul, Rohit Sharma (c), Virat Kohli, Suryakumar Yadav, Hardik Pandya, Dinesh Karthik (wk), Axar Patel, Ravichandran Ashwin, Bhuvneshwar Kumar, Mohammed Shami, Arshdeep Singh
Top fantasy pick suggestions
Batsmen: Virat Kohli, Suryakumar Yadav, Craig Ervine, Sean Williams
Wicketkeeper: Dinesh Karthik
All-rounders: Hardik Pandya, Sikandar Raza
Bowlers: Arshdeep Singh, Mohammed Shami, Blessing Muzarabani
Betting odds (bet365)
India: 1.06
Zimbabwe: 10.00
Where to watch live
The match starts at 1.30 PM IST. In India, the match will be broadcast on the Star Sports Network. Online viewers can follow the live-action via Disney+Hotstar.
Check out our in-depth Market Coverage, Business News & get real-time Stock Market Updates on CNBC-TV18. Also, Watch our channels CNBC-TV18, CNBC Awaaz and CNBC Bajar Live on-the-go!