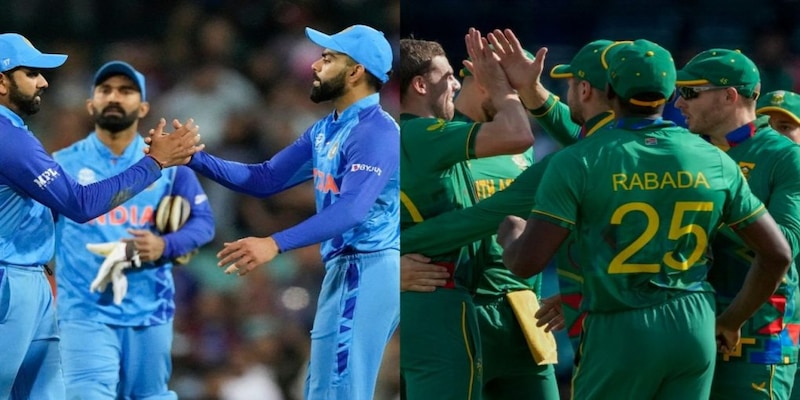 India and South Africa would have grown familiar with each other as the two sides have contested in two Tests, six ODIs, and eight T20Is this year. But the stakes at Perth will be higher than the previous 16 face-offs between the two sides this year. Should weather permit, Sunday's clash could add to this Worl Cup's ever-growing tally of thrillers.

After registering comfortable wins in their previous matches of the ICC T20 World Cup 2022, India and South Africa will head to Perth on Sunday to lock horns in a crucial Group 2 encounter of the Super 12 stage.

On Thursday, South Africa smashed Bangladesh by 104 runs at the Sydney Cricket Ground. A few hours later,  India thumped the Netherlands by 56 runs at the same stadium.
Wins for South Africa and India have meant that the Men in Blue are leading Group 2 with 4 points while the Proteas with 3 points are placed second in the group.  But South Africa are enjoying a handsome net run rate of +5.200 thanks to their huge win over Bangladesh. A victory for either side will strengthen its cause to play in the semis.
Watch: Pakistan captain Babar Azam takes a stunning one-hand catch in slip to dismiss Zimbabwe's Regis Chakabva
India and South Africa would have grown familiar with each other as the two sides have contested in two Tests, six ODIs, and eight T20Is this year. At the start of 2022, India were in South Africa to play tree-match Tests and a three-match ODI series.
Then South Africa toured India shortly after the conclusion of the 2022 season of the IPL to play a five-match T20I series. That series finished on level pegging with both sides winning two matches apiece with the fifth match being washed out. Later in the year just ahead of the World Cup South Africa toured India again, this time for a three-match T20I series followed by a three-match ODI series. India clinched both series by 2-1 margins.  But the stakes at Perth will be higher than the previous 16 face-offs between the two sides this year.
India will be counting on the good form of Virat Kohli. The former Indian captain has notched back-to-back fifties in this World Cup and is yet to be dismissed. India's batting lineup looks more threatening considering that captain Rohit Sharma and Suryakumar Yadav hit half-centuries against the Netherlands with the latter walking away with the Player of the Match award for his efforts.
The only sore area as far as batting is concerned is the form of KL Rahul. The opener has been dismissed cheaply on the scores of 4 and 9 so far.  The bowling looks settled. Everyone who has been asked to bowl in this campaign has chipped in with at least two wickets.
India would need the batting and the bowling to come good against South Africa who will be having spring in their feet after a clinical display against Bangladesh. Against the Bangla Tigers, Quinton de Kock hit a fifty and Rilee Rossouw smashed this World Cup's first century. The twin efforts were then backed up by the bowlers as pacer Anrich Nortje picked 4 wickets and spinner Tabraiz Shamsi claimed 3 scalps to complete the rout.
The only cause of concern for South Africa ahead of the big clash is the form of captain Temba Bavuma. Bavuma was dismissed on just 2 against Bangladesh. His pre-tournament form wasn't great either. Against India, in September the South African skipper was dismissed on the scores of 0,0, 3, and 8 across ODIs and T20Is.
Should weather permit, Sunday's clash could add to this Worl Cup's ever-growing tally of thrillers.
Also Read: India vs Pakistan no-ball controversy - Top umpire Simon Taufel gives his verdict
Form Guide (last five matches)
India: W-W-L-W-W
South Africa: W-NR-W-L-L
India vs South Africa Head-to-head
Matches played: 25
India wins: 13
South Africa wins: 9
No Result: 2
Pitch:
The Pitch at the Perth Stadium is on the quicker side. The fast bowlers from both teams will be licking their lips and itching to have a go at the opposition batsmen. The average first innings total of the three matches played at this stadium for this World Cup is 133.
Weather Conditions
Rains across multiple cities of Australia have started to play spoilsport in this World Cup. Saturday's. At the time of writing, four Super 12 matches have ended in No Result due to rain. But thankfully the rain is likely to stay away in Perth on Sunday. According to Accuweather the probability of precipitation is 1 % on Sunday evening. The weather will mainly be clear with a minimum temperature of 10°C.
Possible XIs
India possible XI: KL Rahul, Rohit Sharma (c), Virat Kohli, Suryakumar Yadav, Hardik Pandya, Dinesh Karthik (wk), Axar Patel, Ravichandran Ashwin, Bhuvneshwar Kumar, Mohammed Shami, Arshdeep Singh
South Africa possible XI: Quinton de Kock (wk), Temba Bavuma (c), Rilee Rossouw, Aiden Markram, David Miller, Tristan Stubbs, Wayne Parnell, Keshav Maharaj, Kagiso Rabada, Anrich Nortje, Tabraiz Shamsi
Top Fantasy picks suggestions
Batsmen: Suryakumar Yadav, Virat Kohli, Rilee Rossouw, David Miller
Wicketkeeper: Quinton de Kock
All-rounder: Hardik Pandya, Axar Patel
Bowlers: Kagiso Rabada, Arshdeep Singh, R Ashwin, Anrich Nortje
Betting Odds (bet365)
India: 1.53
South Africa: 2.50
Where to watch
The match begins at 4:30 PM IST. In India, the match will be broadcast on the Star Sports Network. Online viewers can follow the live-action via Disney+Hotstar.
(Edited by : Abhishek Jha)
Check out our in-depth Market Coverage, Business News & get real-time Stock Market Updates on CNBC-TV18. Also, Watch our channels CNBC-TV18, CNBC Awaaz and CNBC Bajar Live on-the-go!