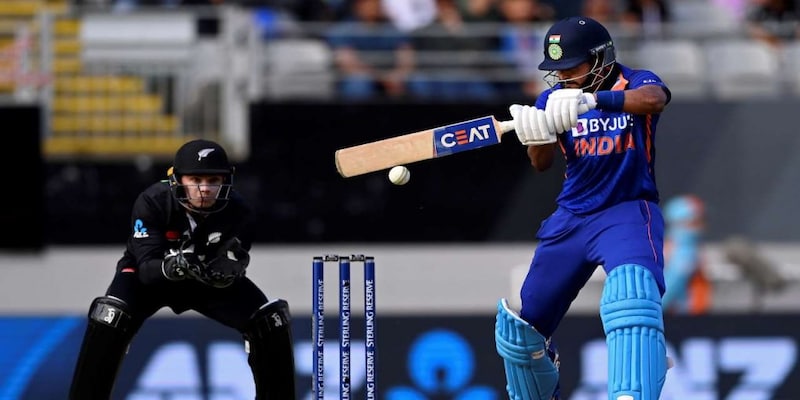 Team India are being led by Shikhar Dhawan, who takes over from all-rounder Hardik Pandya. New Zealand captain Kane Williamson returns at the helm after missing the third T20I in Napier due to a medical appointment.

Hello and welcome to the latest updates from the first One Day International (ODI) between New Zealand and India, which began at 7 am IST on November 25 at the Eden Park in Auckland. India will be playing their fourth match against the Kiwis after having won a rain-hit 3-match T20I series.

Under Hardik Pandya’s captaincy, India managed to pull out a series win despite one match being a washout. The two teams are meeting in the ODI format for the first time in nearly two years post pandemic.
For the ODI series, India are being led by Shikhar Dhawan. Viewers in India can catch all the action live on Amazon Prime and DD Sports 1.
The Men in Blue are coming hot into the game after a splendid performance in the T20I against the hosts.
Catch all the latest action from the 1st ODI between India and New Zealand here:
Tom Latham and Kane Williamson have remained not-out and put together a partnership of 221 runs. Latham scored 145 in 104 balls and Williamson hit 94 in 90 deliveries. Kiwis reach the target in 47.1 overs with 7 wickets in hand.
New Zealand now need less than 100 runs from the final 11 overs. The match is heading towards an exciting finish!
New Zealand are now in complete control of the run chase. The partnership between Kane Williamson and Tom Latham has gone beyond 100. The two batsmen are well-settled after completing their fifties.
New Zealand captain Kane Williamson and Tom Latham have put up a partnership as the Kiwis look to chase down 307.
Williamson has reached his half-century. The New Zealand skipper is in good company of Tom Latham. The two batsmen have ensured that New Zealand score is now past the 150-run mark.
Coming off a first-ball duck, Shreyas Iyer found form with a neat half-century before Washington Sundar blazed away to a 16-ball 37 to guide India to a competitive 306 for seven in the first ODI against New Zealand here on Friday.
Besides Iyer's 76-ball 80, Shikhar Dhawan (72 off 77 balls) and Shubman Gill (50 off 65) too struck fluent fifties after the tourists were sent in to bat.
Sundar smashed three sixes and as many fours to prop up India at the death, while Iyer hit four maximums and four boundaries, having entered the game after his duck in the final T20 International two days ago.
New Zealand decided to field first after winning the toss and while Kane Williamson's bowlers prevented the Indians from getting off to a flyer, skipper Dhawan and Gill opened up after being watchful.
Having reached 40 in the first 10 overs after Gill was dropped by Lockie Ferguson off the bowling of Matt Henry, the Indian openers sought to improve the run rate and looked for boundaries.
Their quest paid off as India went past 100 in the 21st over with both Dhawan and Gill clearing the ropes on a regular basis.
Dhawan slashed Henry behind deep point and clipped him off pads in the 15th over to get two successive fours.
The India captain then got two more boundaries, off Adam Milne, including a smart upper cut to bring up India's hundred.
Having already hit two sixes over long-on and third man, for which he employed an excellent ramp shot, Gill got his third maximum when he smashed left-arm spinner Mitchell Santner down the ground and into the sightscreen.
Even as Dhawan got two boundaries against Tim Southee, Gill swept Santner for a boundary and closed in on fifty. However, right after reaching his half-century, Gill got out after failing to clear Devon Conway in the deep off Ferguson.
Looking in fine fettle, Dhawan too was dismissed soon after as he hit Southee straight to Finn Allen at point.
Both the India openers were back in the hut after playing sensible cricket, paving the way for Iyer and Rishabh Pant's arrival in the middle.
While Pant got off the mark with a four to deep third man region after he pushed at a Southee length ball, Iyer played the upper cut off a quick Ferguson delivery to begin his innings.
But New Zealand managed to pull things back with the wickets of Dhawan and Gill.
When on 11, Iyer was offered a life by Tom Latham after the batter had attempted the ramp shot against a short Milne delivery.
However, a ball after guiding Ferguson to the fine leg boundary, Pant went for the pull but dragged it onto his stumps, bringing to an end an innings that failed to inspire confidence.
That brought into the middle the man-in-form, Suryakumar Yadav, who got off the mark with an exquisite cover drive. But, two balls, later, he was walking back to the dressing room after edging the nippy Ferguson to Allen at first slip.
On a ground with short boundaries, the hosts looked comfortable with India at 160 for four in the 33rd over.
But the duo of Iyer and Sanju Smason (36 off 38 balls) forged a 94-run partnership to steady the ship until the latter fell to a brilliant catch by Glenn Phillips.
During the course of his knock, Iyer also became only the second batter after Rameez Raja to score four or more successive 50 plus scores in New Zealand.
India Total: 306 (For 7 wickets in 50 overs)
Scorecard:
India batting: Shikhar Dhawan c Allen b Southee 72
Shubman Gill c Conway b Ferguson:  50
Shreyas Iyer c Conway b Southee: 80
Rishabh Pant b Ferguson: 15
Suryakumar Yadav c Allen b Ferguson: 4
Sanju Samson c Phillips b Milne: 36
Washington Sundar not out: 37
Shardul Thakur c Latham b Southee: 1
Extras: (B-2 LB-1 W-8) 11
New Zealand Bowling:
Tim Southee 10-0-73-3,
Matt Henry 10-1-48-0,
Lockie Ferguson 10-1-59-3,
Mitchell Santner 10-0-56-0,
Adam Milne 10-0-67-1.

New Zealand have elected to bowl against #TeamIndia in the first #NZvIND ODI.Follow the match 👉 https://t.co/jmCUSLdeFf pic.twitter.com/LUx0Ws1ikG— BCCI (@BCCI) November 25, 2022

IND vs NZ latest updates: Arshdeep Singh and debut for tesm India in ODIs
Umran Malik and Arshdeep Singh are making their ODI debut against New Zealand. All-rounder Shardul Thakur has been included in the squad and will be playing ahead of Deepak Chahar in the first ODI. Sanju Samson gets another game to show his skills.
(Edited by : Jerome Anthony)
Check out our in-depth Market Coverage, Business News & get real-time Stock Market Updates on CNBC-TV18. Also, Watch our channels CNBC-TV18, CNBC Awaaz and CNBC Bajar Live on-the-go!