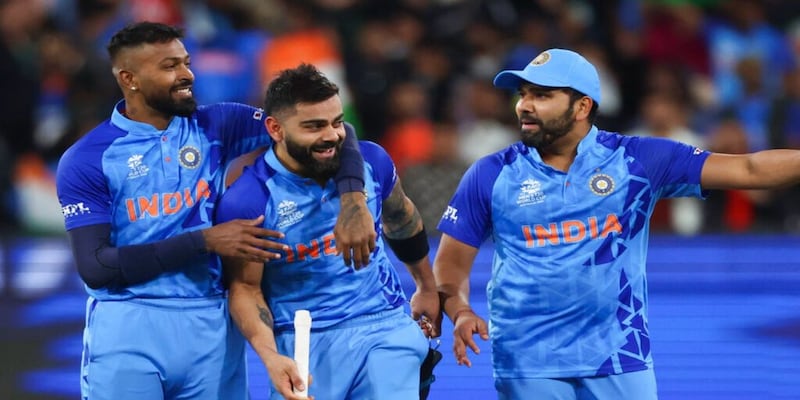 India will be eager to bounce back and seal their spot in the semifinals after suffering their first defeat of the tournament in their previous outing against South Africa.

Rohit Sharma’s men will be eager to step onto the field and get back to winning ways as they take on Bangladesh in their penultimate Super 12 match of the T20 World Cup 2022 in Adelaide on Wednesday, November 2.

India could move up to top spot with a victory against neighbours Bangladesh and take a big step in their bid to seal a semifinal berth at the tournament. Shakib Al Hasan’s men are currently tied with India on points but behind on net run rate.
India suffered their first defeat of the tournament as they came up against the lethal pace attack of South Africa in their last game. Suryakumar Yadav (68 off 40 balls) was the lone bright spot as only three batters managed double-digit scores against the Proteas. SKY's knock ensured that India managed to post a respectable 133/9.
Also Read
| Rahul Dravid says India will not get complacent against Bangladesh
Arshdeep Singh (2/25) made early inroads with two wickets in just the second over of the game, however half-centuries from Aiden Markram and David Miller saw South Africa walk off with the two points.
Much has been made about KL Rahul’s patchy form ahead of this outing however, head coach Rahul Dravid has come out strongly in support of the opener. Rahul has failed to reach double-digits in the last three games and seems to be struggling for confidence.
There are also doubts about Dinesh Karthik’s fitness with Dravid saying a late call will be taken regarding the veteran’s participation. Karthik wasn’t able to complete the previous match after pulling up with back spasms as Rishabh Pant came out as a substitute to keep wickets.
Also Read | 'We know his quality, we know his ability' coach Rahul Dravid backs KL Rahul
Bangladesh will fancy their chances especially as they find themselves well placed in third spot on the table, tied on points with India. They enter this game on the back of a closely fought 3-run victory against Zimbabwe.
Najmul Hossain Shanto provided the foundation with a key knock of 71 to help Bangladesh post 150/7. Taskin Ahmed then continued his rich vein of form, cleaning up both openers and finishing with figures of 3/19 to help peg back Zimbabwe in the chase and set his team on the path to victory.
However, India have a strong record against Bangladesh, losing just one T20I against them in the past and Rohit Sharma’s men will be eager to ensure that gap between the two sides remains the same.
Form Guide (last five matches, most recent first)
India: L-W-W-L-W
Bangladesh: W-L-W-NR-L
India vs Bangladesh Head-to-head
Matches played: 11
India wins: 10
Bangladesh wins: 1
Adelaide Pitch and Weather Conditions: There’s a bit of a scare in Adelaide with heavy rains lashing the city on the eve of the encounter. There is also rain forecast in the evening which could disrupt proceedings. The Adelaide Oval meanwhile is a batter friendly ground which means we could be in for a high-scoring contest. Sides batting first have averaged 170 in T20 night games at the venue.
India vs Bangladesh Possible XI:
India Probable XI: KL Rahul, Rohit Sharma (C), Virat Kohli, Deepak Hooda, Suryakumar Yadav, Hardik Pandya, Rishabh Pant (WK), R Ashwin, Mohammed Shami, Bhuvneshwar Kumar and Arshdeep Singh.
Bangladesh Probable XI: Soumya Sarkar, Najmul Hossain Shanto, Litton Das, Shakib Al Hasan (C), Afif Hossain, Nurul Hasan (wk), Mosaddek Hossain, Yasir Ali, Taskin Ahmed, Mustafizur Rahman, Hasan Mahmud.
India vs Bangladesh Fantasy Picks:
Keeper – Litton Das
Batsmen – Virat Kohli, Suryakumar Yadav, Najmul Shanto
All-rounders – Shakib Al Hasan, Hardik Pandya, Deepak Hooda
Bowlers – Bhuvneshwar Kumar, Mohammed Shami, Taskin Ahmed, Arshdeep  Singh
Betting Odds (bet365)
India: 1.14
Bangladesh: 5.50
Where to watch: The match begins at 1:30 PM IST. In India, the match will be broadcast on the Star Sports Network. Online viewers can follow the live-action via Disney+Hotstar.
Check out our in-depth Market Coverage, Business News & get real-time Stock Market Updates on CNBC-TV18. Also, Watch our channels CNBC-TV18, CNBC Awaaz and CNBC Bajar Live on-the-go!