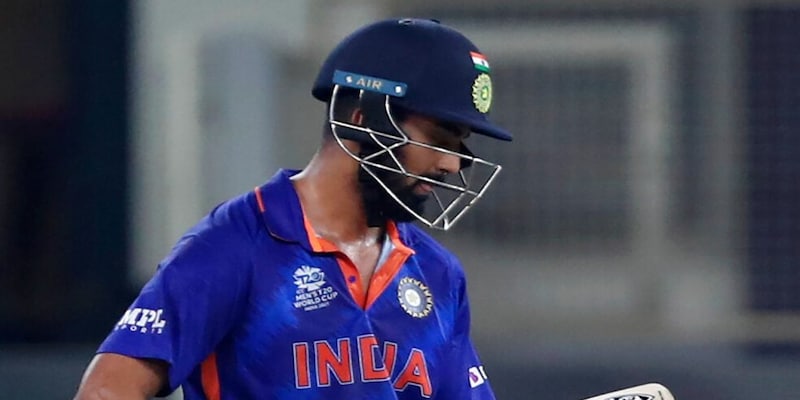 Often in the shortest form of the sport, Rahul the batter becomes a become obstacle for Rahul the captain in attaining success. One of the secrets of success at the highest level in sports is to keep reinventing oneself. Rahul only has to look as far as his teammate Hardik Pandya to know what reinventing is.

With regular India captain Rohit Sharma rested for the upcoming T20I series against South Africa, the leadership responsibility is now on the shoulders of KL Rahul.

Often in the shortest form of the sport, Rahul the batter becomes an obstacle to success for Rahul the captain.
A little throwback proves this. Earlier this year Rahul was appointed the captain of the Indian team for the three-match ODI series against South Africa.
The series was a disaster — India were whitewashed 0-3. Rahul didn't shine with the bat — he had just scored just one fifty, a 55 from 79 balls, in the second ODI. The result was a dent in Rahul's long-term goal to captain India.
Before captaining India against South Africa in that series, Rahul had been the skipper of Punjab Kings in the 2020 and the 2021 seasons of the Indian Premier League. In the two seasons prior, the stylish batsman had scored 1,252 runs in 28 matches with one century and 12 fifties at an astonishing average of 54.43 and a strike rate of 146.60.
Also read:
IND vs SA T20I series: 5 South African players to watch out for
At the helm of affairs at Punjab Kings, Rahul had an even better run with the bat as he amassed 1,296 runs in 27, games scoring one hundred and  11 fifties while averaging 58.90. But one stat that took a hit was his strike rate, which dipped to 133.74.
It was clear Rahul was taking the majority of the responsibility for scoring the bulk of runs for his team.
The approach backfired as Punjab Kings finished sixth in both the seasons and the team could muster 12 wins across 28 games it played over the 2020 and the 2021 seasons.
As Rahul moved from Punjab Kings to captain IPL newcomers Lucknow Super Giants, he again outscored all other batsmen in his team, putting together 616 runs at an average of 51.33 and a strike rate of 135.38.
Unlike, Punjab Kings, Lucknow Super Giants performed better in the league stage, finishing third on the points table.
But the reason for Lucknow Super Giants' success was partly due to more wicket-takers in their ranks compared to Punjab Kings.  In the 2022 season of the IPL, the Giants had five bowlers who picked 10 or more wickets. In each of the 2020 and the 2021 seasons, the Kings had only three bowlers picking over 10 wickets.
Also read: IND vs SA T20I series: 5 Indian Players to watch out for
Former cricketer-turned-commentator Sanjay Manjerakar hits the nail on the head while analysing Rahul's approach in a T20 game.
"He just has this deep-rooted belief or attitude or approach that he wants to bat longer rather than quicker," Manjarekar said in an ESPNCricinfo video after Lucknow Super Giants lost to Royal Challengers in the Eliminator of the IPL 2022 playoffs.
Manjerakar further added: "This is the guy who at the international level has a strike rate of over 140. So when he is one of the many batters in the team, that is when KL Rahul is at his best. So we have seen enough of KL Rahul to now know that when he becomes the captain, the key player...KL Rahul is not temperamentally suited to take this kind of responsibility."
Rahul's approach to a T20 innings is now an open secret. He himself would have taken note of the criticisms that have come his way. One of the secrets of success at the highest level in sports is to keep reinventing oneself. Rahul only has to look as far as his teammate Hardik Pandya to know what reinventing is. In the IPL 2022 season, Pandya reinvented himself by shifting higher up the batting order to score more runs and prove his worth. It is now on Rahul if can bat faster to prolong his T20 career.
Also Read: Hardik Pandya 2.0 - The all-rounder who can bat, bowl and lead from the front
Check out our in-depth Market Coverage, Business News & get real-time Stock Market Updates on CNBC-TV18. Also, Watch our channels CNBC-TV18, CNBC Awaaz and CNBC Bajar Live on-the-go!