ICC T20 World Cup 2021: Reliving the highs and the lows of the tournament

Here is replaying the T20 World Cup 2021 through its highlight reel.

The curtains have down to the ICC Men's T20 World Cup 2021. The tournament was played across two nations, Oman and the UAE. Sixteen teams competed for the ultimate prize in cricket's shortest format. Like a T20 inning, the T20 World Cup 2021 ebbed and flowed.

Here is replaying the T20 World Cup 2021 through its highlight reel. Hasan Ali and Mohammad Shami found themselves at the receiving end of Online abuse
Two fast bowlers were at the receiving end of online abuse and were made soft targets for their teams' losses. After India's loss to Pakistan, Mohammad Shami was targeted on social media. The 31-year-old bowled became the main target after the defeat in Dubai. Hundreds of messages were left on Shami’s Instagram account saying he was a “traitor” and should be thrown out of the Indian team. But Shami had the backing of his captain. Indian skipper Virat Kohli stood up for Shami as Kohli dismissed the social media trolls as spineless people.
Similarly, Pakistan pacer Hasan Ali too became the victim of online abuse after Pakistan's loss to Australia in the first semifinal.  Ali’s social media accounts were filled with abuses by many, who blamed him for Pakistan’s loss in the semi-final. And just like how Kohli stood for Shami, Ali had the backing of his captain Babar Azam. The Pakistan captain labelled Ali as a "fighter" and said that he cannot think of dropping Ali. Jos Buttler (Image: AP)
Jos Buttler's unbeaten 101 in 67 balls was the only hundred of the T20 World Cup 2021. As Buttler completed his first T20I hundred, he became the first Englishman to score a hundred in Test, ODIs and T20Is.  The century also helped in furthering Buttler's credentials as one of the best openers in T20 cricket. 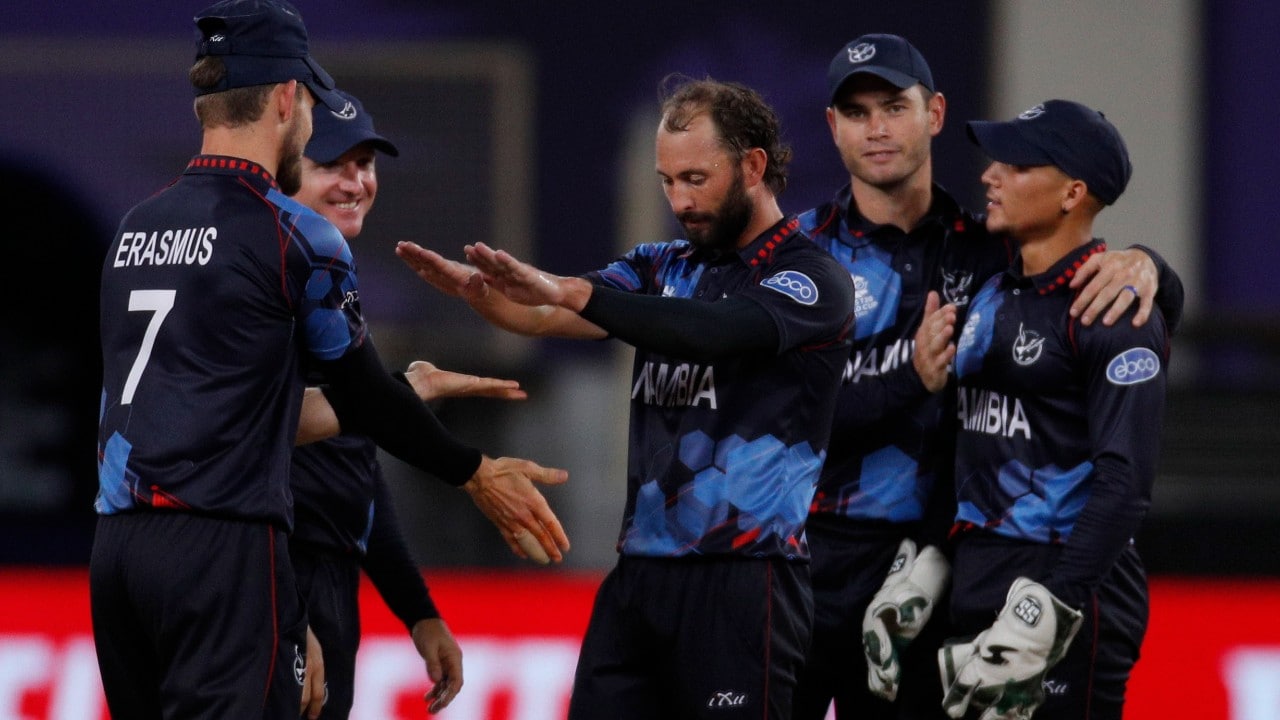 Namibia's journey for T20 World Cup 2021 began when the team finished fourth in the 2019 ICC Men's T20 World Cup Qualifier. A fourth-place finish meant that they would play in the first phase of the T20 World Cup.  But Namibia were at the World Cup not just to make numbers. Wins against the Netherlands and Ireland in the first round meant that Namibia were through to the 'Super 12s' of the World Cup and achieved direct qualification for the 2022 T20 World Cup.  Namibia's win over Ireland was their first win over a Full Member.  The team pushed Pakistan hard. There were a few praise-worthy individual performances too. Skipper Gerhard Erasmus braved through a finger injury and scored 151 runs in the tournament including an unbeaten fifty. All-rounder David Wiese scored 227 runs and picked 6 wickets. Jan Frylinck had 9 wickets and fellow left-arm pacer Ruben Trumpelmann became the first bowler to take three wickets in the first over of a T20I innings as he rattled Scotland. Cleary, the Namibian eagles took flight in Oman and in the UAE. 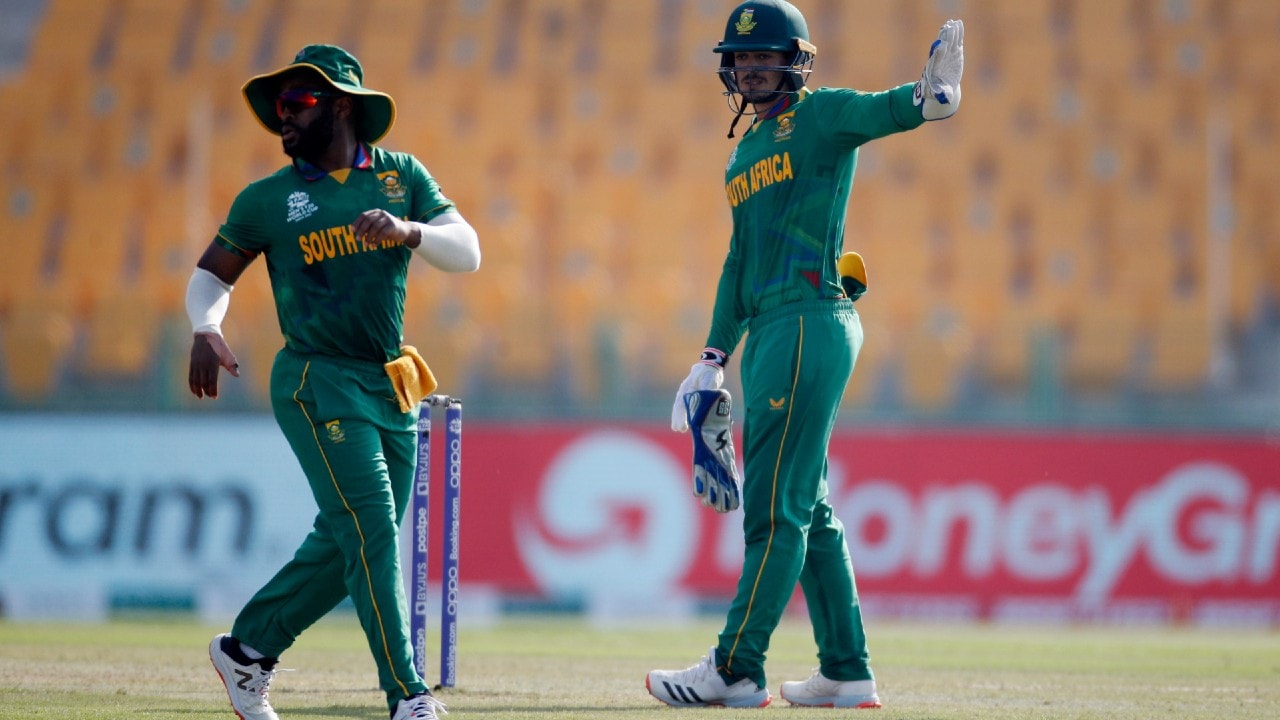 Quinton de Kock and Temba Bavuma (Image: Reuters)
A mini-crisis struck South African cricket as wicketkeeper batter Quinton de Kock excused himself from the team just ahead of the team's match against West Indies on 'personal' grounds. But it later emerged that de Kock had refused to comply with Cricket South Africa's directive for all the players to compulsorily take a knee to show's team unified response against racial discrimination. South Africa captain Temba Bavuma won plaudits in how he dealt with the situation and lot let it snowball into a massive row. Bavuma responded by having "tough conversations" to be able to get the comfort to accept the other person’s decisions. Bavuma added that he cannot force anyone to see things the way he does.
Also read: ICC T20 World Cup 2021 -Babar Azam, Jos Buttler and more; Check out which players deserve a place in 'team of the tournament
Then, de Kock apologised to his teammates and fans for the "hurt, confusion, and anger". In a statement released by Cricket South Africa de Kock was quoted saying: "If me taking a knee helps to educate others, and makes the lives of others better, I am more than happy to do so,". de Kock kept his words and rightfully took the knee in South Africa's match against Sri Lanka. West Indies' Andre Russell is clean bowled by England's Adil Rashid during the Cricket T20 World Cup match between England and the West Indies at the Dubai International Cricket Stadium, in Dubai, UAE, Saturday, Oct. 23, 2021. (AP Photo/Aijaz Rahi)
Before the tournament picked up the pace and sixes and fours started flowing with ease, the batters endured a really tough time out in the middle. Three of the five lowest scores three of the five lowest totals in the history of the tournament were in this World Cup. Scotland was bowled bout on just 60 in 10.2 overs against Afghanistan. Sri Lanka skittled out struggling the Netherlands for a mere 44 in 10 overs. But most shocking was West Indies getting bowled out on just 55 in 14.2 overs in their tournament opener against England. 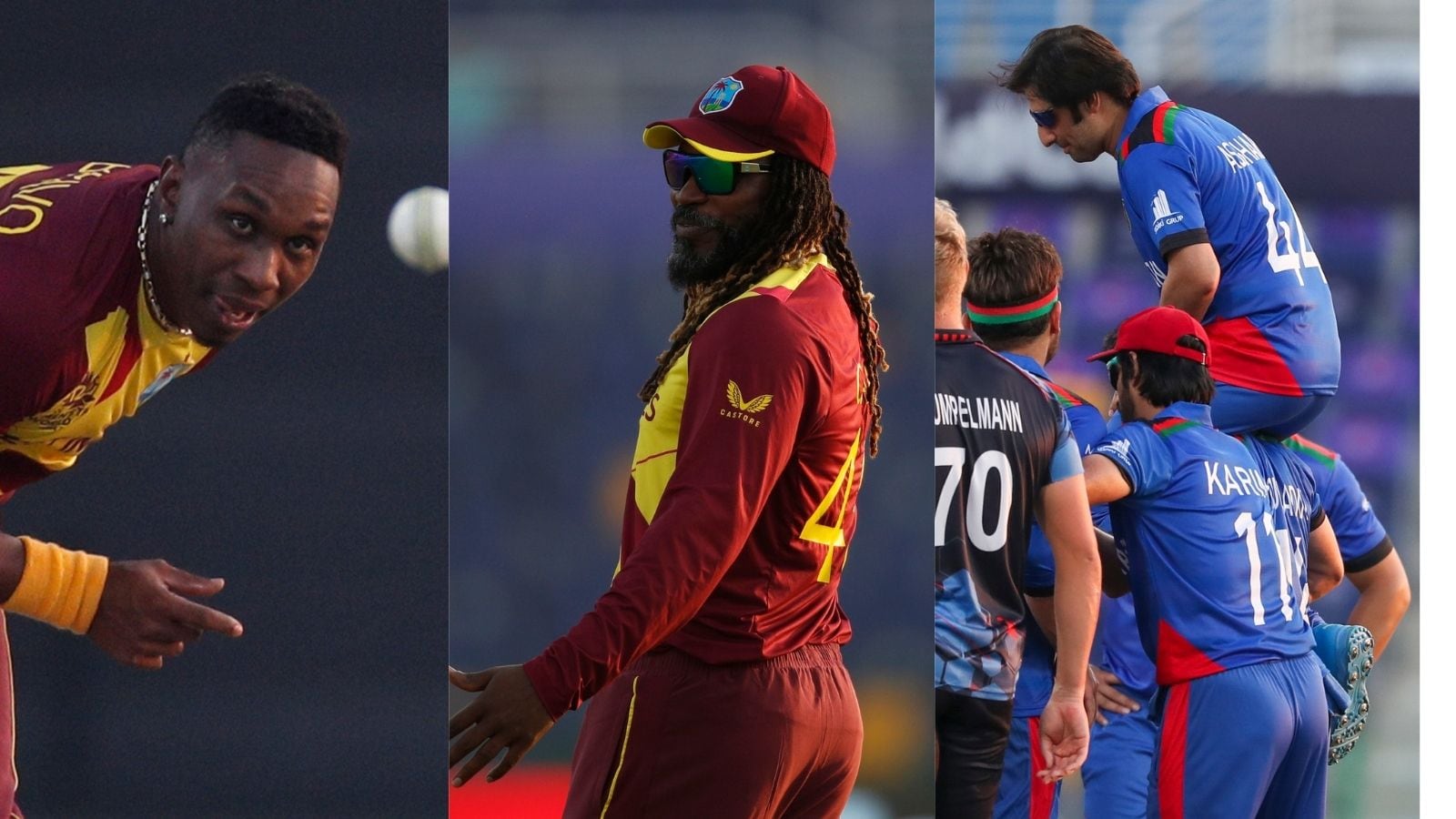 Dwayne Bravo, Chris Gayle and Asghar Afghan
Dwayne Bravo and Asghar Afghan announced their retirement from international cricket during the World Cup. Chris Gayle is hoping for a farewell match in front of his home crowd in Jamaica but has conceded though that he has played his last World Cup game.  The T20 World Cup was a farewell for Bravo, Gayle and Afghan who have been legends for their teams.

The two semi-finals of the World Cup were worth savouring and breathtaking, to say the least. Not to mention that both the semis followed an uncannily similar script.  And at the end of the two matches, came out the two unlikeliest of heroes in Daryl Mitchell and Matthew Wade.  In the first semi-final, England set a target of 167 for New Zealand. In the chase, the Kiwis were struggling 58/2 after 10 overs needing 109 runs from the next 60 balls.  But Mitchell's determined 72 from 47 balls ensured that New Zealand won the match. A day later, Australia was chasing 177 against Pakistan.  At the halfway mark of the chase, Australia were 89/3 and 88 runs adrift from the target. Then out of nowhere, Wade smashed  41 from mere 17 balls to make Australia home.  Both New Zealand and Australia needed more than 70 runs in the second half of their chase.  And both teams won by the exact same margin, 5 wickets and 6 balls remaining. The eerie similarity just doesn't end here. There were two missed catches in both chases. Jonny Bairstow's knee hit the rope as he attempted a catch off James Neesham and Hasan Ali overran the ball while running in from deep to catch the ball from the bat of Wade. Australia lifting their first T20 World Cup trophy (Image: Reuters)
While Australia and New Zealand were part of two thrilling semifinals, the contest between the two sides in the final turned out to be a lopsided one. Winning the toss, Australian skipper Aaron Finch elected to field first. Thanks to Kane Williamson's superb 85 from 48 balls, New Zealand posted a challenging 172/4. But Williamson's efforts were overshadowed as David Warner and Mitchell Marsh combined well in the chase. Warner hammered 53 from 38 balls and Marsh blasted an unbeaten 77 from 50 deliveries as Australia romped home in just 18.5 overs with 8 wickets to spare. Australia thus won their first T20 World Cup title. Australia became the sixth different team after India, Pakistan, England, West Indies and Sri Lanka to lift the T20 World Cup trophy.
Tags
Previous Article