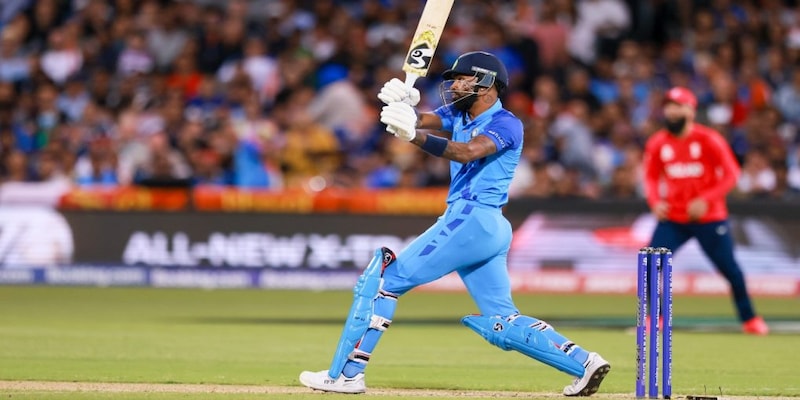 With India scoring at a run-a-ball pace when Hardik Pandya walked out to bat, the explosive all-rounder hammered 4 fours and 5 sixes en route to a 29-ball fifty to power his team to a competitive total.

With a spot in the ICC T20 World Cup 2022 final up for grabs, India and England locked horns in the second semifinal at the Adelaide Oval on Thursday, November 10. England captain Jos Buttler got the rub of the green early on as he won the toss and put India in to bat first in front of a packed stadium.

The decision seemed to have worked out well for Buttler as England got rid of opener KL Rahul (5) in the second over. India captain Rohit Sharma (27 off 28 balls) also struggled to pick up the pace and eventually fell victim to Chris Jordan in the 9th over.
Watch
| Virat Kohli's majestic six over cover in T20 World Cup semifinal
Suryakumar Yadav, who has been in scintillating form in Australia, got off to a quick start with a four and six off the first nine deliveries he faced. However, England spinner Adil Rashid landed the big blow as he got Suryakumar (14) caught out in the 12th over.
That meant Hardik Pandya walked out to bat with India struggling at 75/3 and scoring at a run-a-ball pace. Hardik took his time to settle in initially at the crease while Virat Kohli attacked the bowling at the other end.
The all-rounder didn’t take any risks off the first nine balls he faced but then got into the groove as he thumped Liam Livingstone for a boundary straight down the ground in the 15th over.
Also Read | T20 World Cup 2022: Virat Kohli scripts history, first batter to score 4,000 T20I runs
However, the real release shot from Hardik came right at the start of the 17th over when he clubbed Sam Curran for a flat six over cover.
Watch Hardik Pandya smacks Sam Curran for SIX in 17th over
View this post on Instagram
That seemed to get the blood flowing as Hardik then tore into Chris Jordan at the start of the next over with back-to-back sixes. Jordan started with a length delivery which Hardik pulled over deep mid-wicket for a maximum.
Hardik then waited deep in the crease and whipped a yorker length delivery over deep backward square with a shot that bore stark resemblance to the famous helicopter shot of MS Dhoni.
Hardik Pandya smashes Chris Jordan for back-to-back sixes in 18th over
View this post on Instagram
Virat Kohli departed soon after bringing up his fifty in the 18th over but Hardik ensured India didn’t lose any momentum with a four, six and four off consecutive balls in the penultimate over.
Hardik first squeezed out a wide yorker from Curran on the 4th delivery to guide it past point for four. He then nailed the pull to send the 5th delivery sailing into the stands over deep mid-wicket for a massive six.
Hardik brought up a 29-ball fifty courtesy a misfield from Ben Stokes on the final delivery of the 19th over as he whipped it hard towards deep mid-wicket.
Hardik Pandya brings up 29-ball fifty against Sam Curran in the 19th over
View this post on Instagram
Ensuring India finish with a flourish, Hardik then smashed a six and four against Jordan off back-to-back balls in the final over before unfortunately stepping onto the stumps on the final ball and getting out ‘hit wicket’.
Hardik clubbed the 4th delivery from Jordan over long-on for six before pulling a high full-toss through the gap at deep mid-wicket for a one-bounce four. His blistering knock helped India reach 168/6 in their quota of 20 overs.
Hardik Pandya whacks back-to-back boundaries against Chris Jordan in the 20th over
View this post on Instagram
Unfortunate end to Hardik Pandya’s innings as he gets out ‘hit wicket’
View this post on Instagram
Check out our in-depth Market Coverage, Business News & get real-time Stock Market Updates on CNBC-TV18. Also, Watch our channels CNBC-TV18, CNBC Awaaz and CNBC Bajar Live on-the-go!