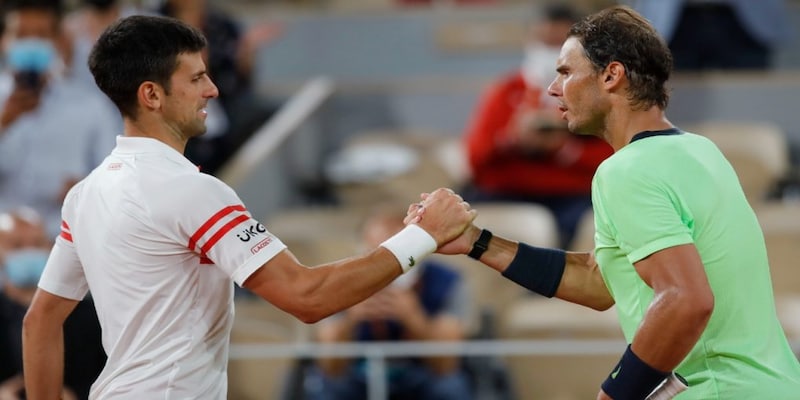 The clash between Djokovic and Nadal is a repeat of the 2021 semifinal at Roland Garros. In that game, Nadal came out as the second-best as Djokovic beat the Spaniard 3-6 6-3 7-6 6-2 to qualify for the final. In the title round, Djokovic beat Greek's Stefanos Tsitsipas in five sets to win the second French Open title of his career.Naturally, the 'Clay King' Nadal would be itching to do get better of Djokovic this time around and move a step closer to regaining the French Open title.

Tuesday is going to be a Red Letter Day in the French Open, as World No. 1 and reigning men's singles champion Novak Djokovic taking on World No. 5 and the King of Roland Garros Rafael Nadal in the quarterfinals.

This clash of the two titans is a repeat of last year's semifinal, which Djokovic won 3-6, 6-3, 7-6, 6-2 to breeze into the final. In the title clash, Djokovic beat Greek's Stefanos Tsitsipas in five sets to win his second French Open.
Naturally, Nadal — a record a 13-time champion —  will be itching to do exaxct get better of Djokovic this time around and move a step closer to regaining the French Open title.
Heading into the quarterfinal, form is onDjokovic's side. The Serb has yet to drop a set at the French Open this year. He demolished Japan's Yoshihito Nishioka, Slovak Molcan, Slovenia's Aljaz Bedene, and Argentina's Diego Schwartzman to reach the Last 8 stage of the tournament.
But Djokovic knows that only on clay, and especially at the French Open and irrespective of form, seedings and rankings, the one player who cannot be ruled out at any stage is Nadal.
Nadal's mastery over the French Open shone for the umpteenth time as he beat Canada's Felix Auger-Aliassime  3-6, 6-3, 6-2, 3-6, 6-3 in the fourth round in a five-set slugfest that lasted 4 hours and 21 minutes. Before that, Nadal cruised passed Australia's Jordan Thompson, France's Corentin Moutet, and Dutchman Botic Van De Zandschulp to set up the quarterfinal clash against Djokovic.
Ahead of the men's single's quarterfinal match between Novak Djokovic and Rafael Nadal, here is all that you need to know
Djokovic vs Nadal Head-to-Head
:
Matches played: 58
Novak Djokovic wins: 30
Rafael Nadal wins: 28
Djokovic vs Nadal Head-to-Head on clay courts:
Matches played: 27
Novak Djokovic wins: 8
Rafael Nadal wins: 19
Djokovic vs Nadal Head-to-Head at French Open:
Matches played: 9
Novak Djokovic wins: 2
Rafael Nadal wins: 7
Djokovic vs Nadal Best singles performance at French Open
Djokovic winner of the 2021 and 2016 French Open.
Nadal winner of the 2020, 2019, 2018, 2017, 2014, 2013, 2012, 2011, 2010, 2008, 2007, 2006 and 2005 French Open.
Djokovic vs Nadal titles in singles
Djokovic singles titles: 87
Nadal singles titles: 91
Check out our in-depth Market Coverage, Business News & get real-time Stock Market Updates on CNBC-TV18. Also, Watch our channels CNBC-TV18, CNBC Awaaz and CNBC Bajar Live on-the-go!