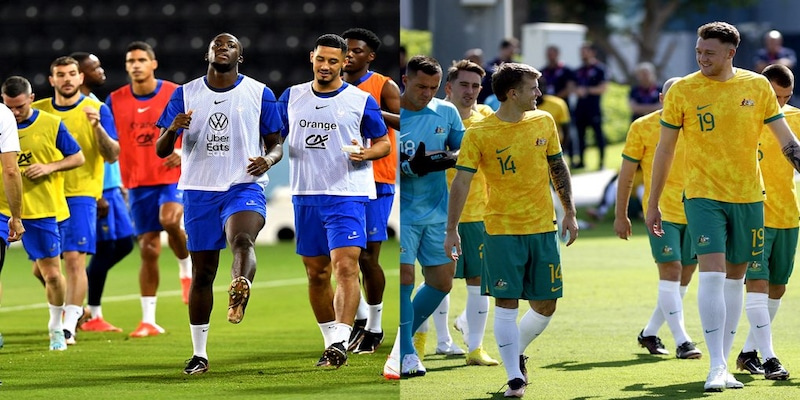 France and Australia will kick off their 2022 World Cup campaign in Qatar the same way they did in the previous edition - by facing off against each other. A comeback win for Les Bleus saw them get off to a perfect start on that fateful day. The Socceroos will give it their all to not replicate the events of 2018, from losing the opener against France to finishing at the bottom of the group.

Crescendos are expected to touch high levels inside the Al-Janoub Stadium in Qatar as defending champions France kickstart their title defense against Australia in the FIFA World Cup 2022 on November 23. Les Bleus have already suffered a major setback after losing Karim Benzema to a thigh injury, but head coach Didier Deschamps will not want that to dampen the spirit of his squad. Meanwhile, the Socceroos, playing in their sixth World Cup, will be itching to get through the group stage for the first time since 2006.

From the start of the tournament, France will be aiming to win back-to-back World Cups - a feat that has only been achieved by two teams in the 92-year history of the tournament. Italy were the first nation to do it back in 1934 and 1938. Brazil replicated the achievement in 1958 and 1962. After 1962, no nation has successfully defended the golden trophy.
Catch all the LIVE action from Day 2 of the 2022 FIFA World Cup here
In fact, Les Bleus' last World Cup defense ended in a disastrous group-stage exit in 2002 after the nation failed to win a single game in their group. 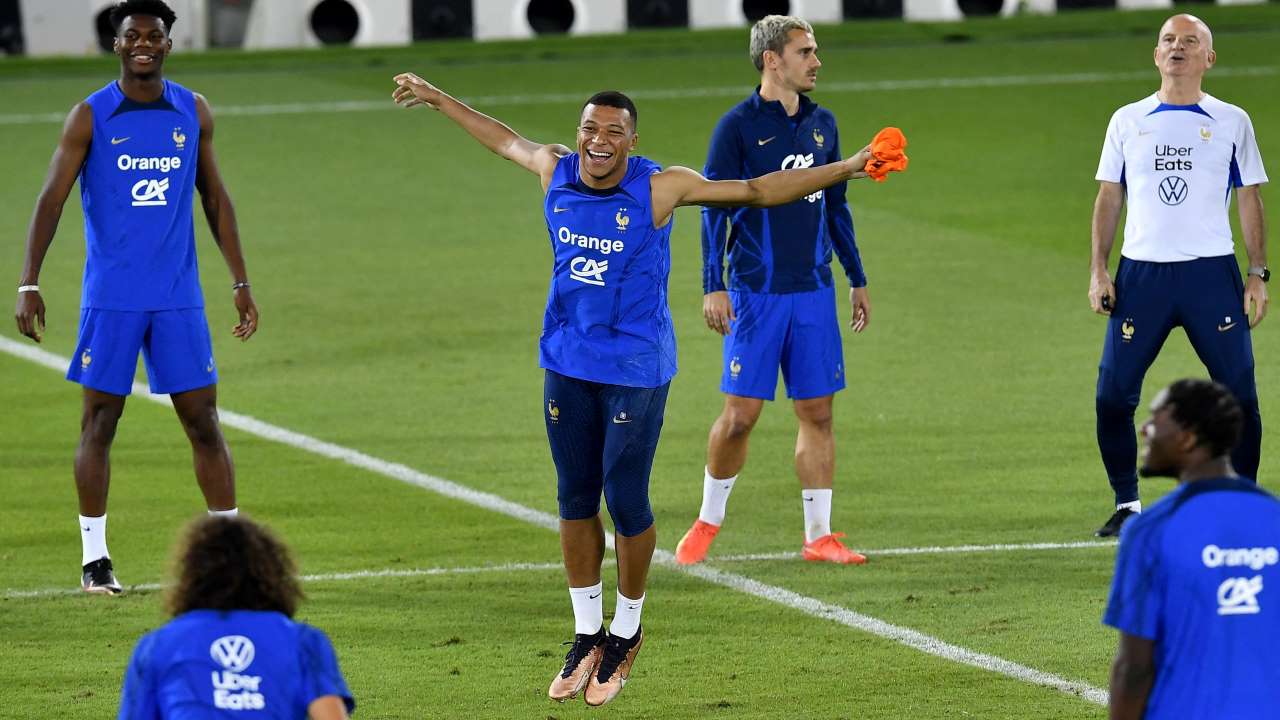 However, Deschamps is less likely to be bothered by the historical statistics as his only dilemma now would be to find the strongest eleven to face Australia. In the past week, France have been dealt three injury blows. Presnel Kimpembe, Christopher Nkunku and Karima Benzema have all bowed out of the World Cup. The squad still comprises a whole lot of talent, but it certainly is not at full strength.
Hugo Lloris is expected to retain his place in goal. Raphael Varane did not feature for Manchester United after picking up an injury last month. However, the 29-year-old is still in the squad. Even if Varane lacks match fitness, Deschamps has plenty of options in defence. Jules Kounde, Dayot Upamecano, Ibrahima Konate, and William Saliba have been impressive in defence for their respective clubs.
Also read: England vs Iran FIFA World Cup 2022: Three Lions may take the knee before match, but will Harry Kane wear 'One Love' armband?
The midfield is where it gets a little tricky for the defending champions. Les Bleus will be without Paul Pogba and N’Golo Kante. The average age of France’s midfielders is 24. This is the area of the pitch where the game could be won or lost. One of the Real Madrid midfield duo of Eduardo Camavinga and Aurelien Tchouameni is likely to start alongside Adrien Rabiot in midfield. Ahead of the midfield, Antoine Griezmann may operate as the trequartista behind Olivier Giroud, who will be flanked by Kylian Mbappe and Ousmane Dembele.
Despite being a little weak in midfield, France will be a tough nut to crack. However, morale is high for the Australians. The Socceroos earned their World Cup spot after a dramatic penalty shootout victory in the 2022 FIFA World Cup qualification AFC-CONMEBOL play-off. Head coach Graham Arnold’s decision to take off goalkeeper Mathew Ryan and throw on Andrew Redmayne gave spectators a flashback of when Louis van Gaal opted for a similar tactic to beat Costa Rica in the 2014 World Cup quarterfinal. Redmayne saved Alex Valera’s penalty and sent Australia to the World Cup.
The Socceroos have played two friendlies after that dramatic victory. Both games were played against their neighbours, New Zealand, and the Aussies won by a one-goal margin in both games. The two sides met at the same point in the previous World Cup. France came from 1-0 down to win the game 2-1, and Australia exited the tournament without winning a single game in the group stage. In total, the two have faced each other five times across all competitions. France have won thrice, one game has ended in a draw, and Australia have beaten Les Bleus in the 2001 FIFA Confederations Cup. Unlike France, Australia do not have massive concerns surfacing because of injuries. Arnold’s only injury blow comes in the form of Martin Boyle, who has been ruled out because of a knee injury. Marco Tilio has been drafted into the squad as a replacement. Skipper Mathew Ryan is expected to start in goal, while the center-back duo of Bailey Wright and Kye Rowles, who kept Peruvian attackers at bay, could start in defence again. Nathaniel Atkinson and Aziz Behich are favourites to start as full-backs.
The Socceroos could opt for a 4-1-4-1 with Aaron Mooy playing as the anchor in midfield with Craig Goodwin, Ajdin Hrustic, Jackson Irvine, and Mathew Leckie in front of him, with Mitchell Duke furthest up front.
France are the outright favourites to win this tie, but Australia have won all of their previous five games building up to this one. If the Socceroos manage to exploit the young and inexperienced French midfield and control the tempo of the game, they might just get something out of this fixture.
Team News: Presnel Kimpembe, Christopher Nkunku, and Karima Benzema are all out of the World Cup for France. Raphael Varane has returned to training and may start from the bench against Australia. For the men from down under, Martin Boyle is out, while Ajdin Hrustic and Harry Souttar have recovered from their respective injuries.
Form Guide: (Last five matches, most recent first)
France: L - W - L - D - D
Australia: W - W - W - W - W
Betting Odds: (Bet365)
France: 1.28
Australia: 5.50
Draw: 11.00
Predicted Line-Ups:
France Possible Starting 11 (4-2-3-1): Lloris; Pavard, Upamecano, Konate, L. Hernandez; Rabiot, Tchouameni; Mbappe, Griezmann, Dembele; Giroud.
Bench: Areola, Mandanda, Kounde, Varane, T. Hernandez, Badiashile, Mendy, Saliba, Camavinga, Fofana, Guendouzi, Veretout, Muani, Coman.
Australia Possible Starting 11 (4-1-4-1): Ryan; Atkinson, Wright, Rowles, Behich; Mooy; Goodwin, Hrustic, Irvine, Leckie; Duke.
Bench: Redmayne, Vukovic, Degenek, Karacic, Souttar, King, Deng, McGree, Baccus, Devlin, Maclaren, Mabil, Cummings, Kuol, Tilio.
Where to watch and match timing: The match will kick off at 12:30 AM IST and will be beamed live on Sports18 and Sports18 HD. Fans can also stream the action online on JioCinema’s official website.
(Edited by : Jerome Anthony)
Check out our in-depth Market Coverage, Business News & get real-time Stock Market Updates on CNBC-TV18. Also, Watch our channels CNBC-TV18, CNBC Awaaz and CNBC Bajar Live on-the-go!