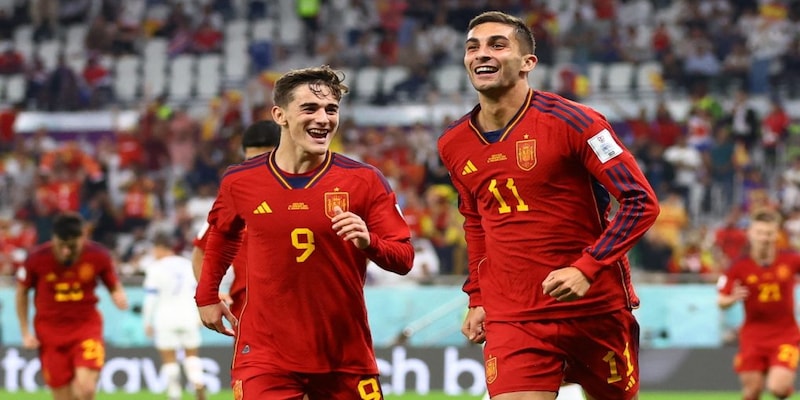 Apart from registering their biggest World Cup win, with 18-year-old Gavi and 19-year-old Pedri starting, Spain also became the first European nation with two teenagers in the starting lineup of a World Cup match in 60 years.

Spain laid down a marker at the FIFA World Cup 2022 thrashing Costa Rica 7-0 on Wednesday, November 24 to record their biggest ever winning margin at a World Cup. La Roja were spurred by two goals from Ferran Torres and strikes by five other players to send a resounding message to the rest of the teams in Qatar.

Apart from registering their biggest World Cup win, with 18-year-old Gavi and 19-year-old Pedri starting, Spain also became the first European nation with two teenagers in the starting lineup of a World Cup match in 60 years, according to statistics platform Opta.
Costa Rica looked overwhelmed from the start in their third straight World Cup campaign. Los Ticos came to Qatar hoping to repeat their surprise run to the quarterfinals in 2014 in Brazil, and avoid a repeat 2018 Russia, when it was eliminated in the group stage after not winning any matches.
Also Read |
Japan stun Germany to deliver second major upset of Qatar 2022, here are some of the biggest upsets in WC finals
Spain, who didn’t get past the round of 16 in Russia, is trying to break through with a major title after making it to the final of the Nations League and the semifinals of last year's European Championship. This year the team also qualified for the Final Four of the Nations League for a second straight time. Spain's last major triumph came at Euro 2012, two years after it won its lone World Cup title in South Africa.
Spain were mindful of the shock defeats suffered by Argentina and Group E rivals Germany against lower opposition in their opening matches and they tormented Costa Rica from the start, going 3-0 up after little more than 30 minutes.
Also Read | FIFA World Cup 2022, Brazil vs Serbia Preview: Betting odds, team news, live streaming, where to watch and more
Dani Olmo got the goals flowing in the 11th minute when he exchanged passes with Gavi and chipped Costa Rica goalkeeper Keylor Navas. Ten minutes later, Marco Asensio timed a run into the box perfectly to connect powerfully with a Jordi Alba cross.
Torres stroked home his penalty in the 31st minute and the Barcelona winger claimed his second in the 54th when he took advantage of hesitant defending.
Gavi, the youngest player to represent Spain at a World Cup, struck with a perfectly hit volley in the 74th minute before substitutes Carlos Soler and Alvaro Morata rounded off a totally one-sided encounter.
Only five countries have scored more goals than Spain at the World Cup — Brazil, Germany, Argentina, Italy and France.
(With Inputs from AP and Reuters)
Check out our in-depth Market Coverage, Business News & get real-time Stock Market Updates on CNBC-TV18. Also, Watch our channels CNBC-TV18, CNBC Awaaz and CNBC Bajar Live on-the-go!