Croatia, Germany, Spain and Belgium in action — Day 4 of FIFA World Cup 2022 has European flavour to it

Croatia, Germany, Spain and Belgium in action — Day 4 of FIFA World Cup 2022 has European flavour to it 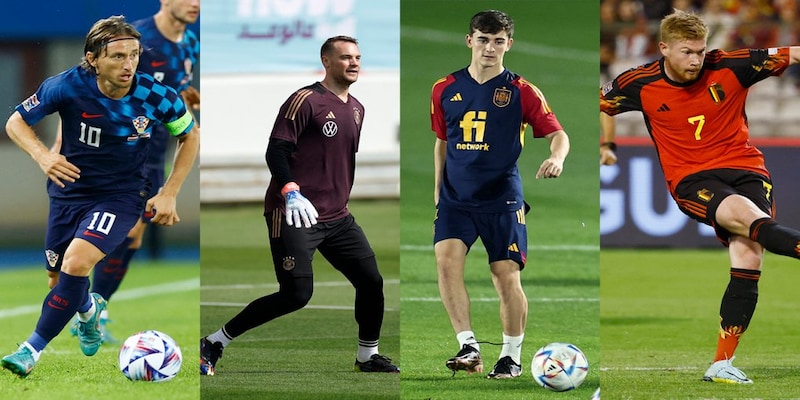 Day 4 of FIFA World Cup 2022 will see four European powerhouses in action as Croatia, Germany, Spain, and Belgium start their Qatar sojourn. Will all of them taste success? Will one of them slip just at the first hurdle? If you are a fan of European football then you would not want to miss all the Day 4 action of FIFA World Cup 2022.

Argentina were at the receiving end of the 2022 FIFA World Cup’s first upset as they went down to Saudi Arabia at the Lusail Iconic Stadium. The upset was followed by frustration for Denmark as they were held to the campaign's first goalless draw by Tunisia. The second goalless draw could not have come quicker as Mexico held Poland at the Ras Abu Aboud Stadium after Guillermo Ochoa saved Robert Lewandowski's near the hour mark. In the final game of the evening, France, aided by an Olivier Giroud brace, got off to a perfect start with a thumping 4-1 win over Australia.

Now let’s see what Day 3 has in store for us.
The 2018 FIFA World Cup runners-up Croatia will kick off the action on Day 3 against Morocco at the Al Bayt Stadium. On paper, Croatia have the stronger squad, but that was the case with Argentina against Saudi Arabia as well. Just like the other upcoming matches, this one could go either way.
Croatia will try their best to capitalise on the momentum they have gathered after going unbeaten in their last six matches. During the run, the Vatreni defeated Denmark twice two and registered a win and a draw against France. The strong Croatian midfield may just be the key that unlocks the door guarding three valuable points.

37-year-old Luka Modrić is heading to his fourth World Cup after being confirmed in the Croatia squad 🍷 pic.twitter.com/LrO5Dn2UXT

Germany will be looking to move on from the events of the previous edition of the World Cup and the Euros. A winning start would be the perfect way to leave the dark days behind them, but the highest-ranked Asian team stands in their way. Japan will undoubtedly bring their A-game to the table against Die Mannschaft.
Marco Reus and Timo Werner are injured, but that is not expected to cause a major dent in Germany’s attempt to bring the trophy home. Die Mannschaft’s solid defence is capable enough to keep the agile Japanese attackers at bay. Up front, Hansi Flick would rely on the blistering pace down both flanks in his first World Cup as head coach.

"We're all going into the tournament with the mindset that we can win the World Cup" 💭🏆@JamalMusiala is excited to get started 🗣️#GER #FIFAWorldCup pic.twitter.com/qvEKZNngjO

In the last edition, Spain were eliminated at the hands of Russia in the Round of 16. They went further ahead in the Euros that followed but failed to clinch silverware. La Roja may have a strong squad but were not picked as favourites by many after the performances in the last two World Cups.
Costa Rica, on the other hand, were a quarterfinalist in 2014. But do they have what it takes to replicate that feat eight years later? Los Ticos are the underdogs going into this tournament but with the players they have, it would not be a surprise if they hold Spain back and emerge as the new dark horses of the tournament.

Spain in 2010 are the only team that has ever won the men's World Cup after losing the first match of the tournament 👀 #ARGvsKSA | #FIFAWorldCup pic.twitter.com/IQV56agn2Q

The final game of the day will see the giants meet the minnows as Belgium face Canada. Despite being without their star striker Romelu Lukaku, the Red Devils boast one of the strongest squads in the World Cup. Eleven of those players will take the pitch against Canada and are expected to glide past them.

The Canucks are featuring in only their second World Cup and will rely on the expertise of players like Alphonso Davies and 39-year-old skipper Atiba Hutchinson in midfield. The game can be won or lost in any area of the pitch. The only concern for Canada here is that they are weaker than Belgium in every area.
Four European powerhouses will be in action on Day 4. Will all of them taste success? Will one of them slip just at the first hurdle? If you are a fan of European football then you would not want to miss all the Day 4 action of FIFA World Cup 2022.
Check out our in-depth Market Coverage, Business News & get real-time Stock Market Updates on CNBC-TV18. Also, Watch our channels CNBC-TV18, CNBC Awaaz and CNBC Bajar Live on-the-go!