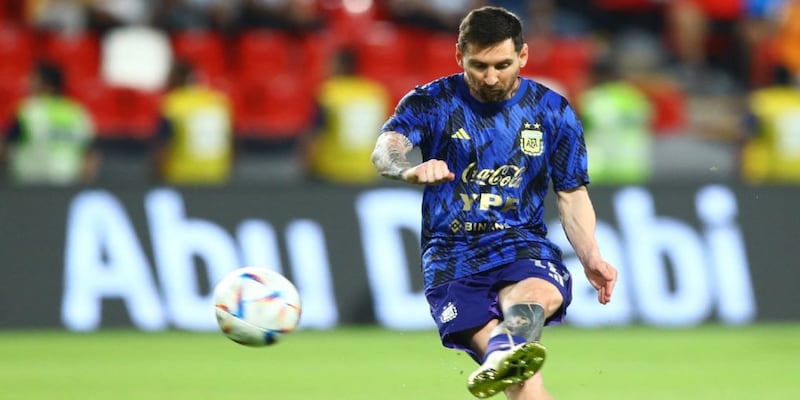 The match at the Lusail Stadium marks the first occasion when the South American giants will be taking on the team from Asia in the World Cup finals. But the two teams have locked horns in international matches before and Argentina have beaten Saudi Arabia twice while drawing the other two matches.The form and history suggest that Argentia should walk away with all three points come the final whistle. Any other result should count as one of the major shocks of the Qatar World Cup 2022.

Lionel Messi's quest for the World Cup title will begin when Argentina takes on Saudi Arabia in a Group C match of the FIFA World Cup 2022 at the Lusail Stadium on Tuesday.

Argentina are one of the favourites to win the FIFA World Cup this year. Should Argentina go all the way La Albiceleste will manage to win their first FIFA World Cup trophy in 36 years and third World Cup title overall. Argentina's previous World Cup wins have come in 1978 and 1986.
Also Read: Enner Valencia fires Ecuador to thumping victory over hosts Qatar
The Lionel Scaloni-coached and Lionel Messi-led side is in its prime form as it is yet to lose a match this year. The team has played 10 matches in 2022 and won 8 of them and drew the remaining 2. In this span, the team has fired 26 goals and conceded just twice.  Last year the team reached the pinnacle of continental success as it defeated fierce rivals Brazil to win the 2021 Copa America title.
But clinching the 2021 Copa America and this year's winning streak will count for nothing if the team stumbles against Saudi Arabia.
Saudi Arabia are playing in the FIFA World Cup finals for the sixth time and second in a row. In 2018, Saudi Arabia lost 5-0 to hosts Russia in the opening game in 2018 then 1-0 to Uruguay before beating Egypt 2-1 in their final game of the group stage.
Heading into the Qatar World Cup 2022, the team is ranked 51st on the FIFA world rankings and their form leading into the World Cup isn't promising either. The Arabian Falcons have managed to win just 2 matches from the 10 matches they have played this year. The team has scampered to 5 draws and 3 losses in the remaining 8 fixtures. The team also isn't in any goal-scoring form either as it has put in only 4 goals in 10 matches and conceded 5.
The match at the Lusail Stadium marks the first occasion when the South American giants will be taking on a team from Asia in the World Cup finals. But the two teams have locked horns in international matches before and Argentina have beaten Saudi Arabia twice while drawing the other two matches.
The form and history suggest that Argentia should walk away with all three points come the final whistle. Any other result should count as one of the major shocks of the Qatar World Cup 2022.
Also Read: Three Lions may take the knee before match, but will Harry Kane wear 'One Love' armband?
Form Guide (last five matches)
Argentina: W-W-W-W-W
Saudi Arabia: W-D-L-D-D
Team News
Argentina Team News
The Argentina camp is dealing with a few injury concerns ahead of their World Cup opener. Just ahead of the World Cup Argentina strikers Nicolás González and Joaquín Correa were ruled out of the tournament because of injuries. Thiago Almada and Angel Correa were called up to the squad late, in order to replace the injured duo. There were fitness concerns for Cristian Romero too but he expected to be fully fit to merit a place in the starting XI for the match.
Saudi Arabia Team News
Saudi Arabia have no injury concerns for their match against Argentina
Argentina's possible starting XI
Formation (4-3-1-2)
Martínez, Molina, Romero, Otamendi, Tagliafico, De Paul, Paredes, Mac Allister,  Messi,  Martinez, Di Maria
Saudi Arabia's possible starting XI
Formation (4-3-3)
Owais, Ghannam, Amri, Bulahyi,  Shahrani, Kanno, Naji, Sharahili, Faraj, Dawsari, Brikan, Bahbri
Betting Odds:
Argentina win: 2/13
Saudi Arabia win: 20/1
Draw: 6/1
Where to watch and match timing:
The match will kick off at 3:30 PM IST on Nov 21 and will be beamed live on Sports18 and Sports18 HD. Fans can also stream the action online on JioCinema’s official website.
Check out our in-depth Market Coverage, Business News & get real-time Stock Market Updates on CNBC-TV18. Also, Watch our channels CNBC-TV18, CNBC Awaaz and CNBC Bajar Live on-the-go!