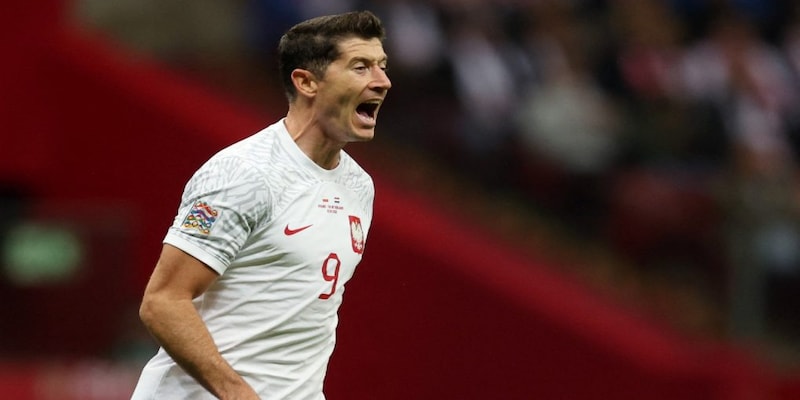 Mexico and Poland will go up against each other at Stadium 974 in Ras Abu Aboud, Doha, Qatar as they open their Group C campaigns at the FIFA World Cup 2022 on Tuesday, November 22.

Leading the line for Poland will be their all-time leading scorer Robert Lewandowski who will be hunting for his maiden World Cup goal in Qatar.
A prolific scorer who moved to Barcelona after a successful stint with Bayern Munich, Lewandowski has 18 goals in all competitions this season. For Poland, he’s scored 76 goals from 134 appearances.
At 34, the World Cup in Qatar may be Lewandowski's last chance for a coveted goal in soccer's biggest event.
Also Read |
FIFA World Cup 2022: Iran forced into first-ever concussion substitute at World Cup after GK Beiranvand suffers nasty collision
Poland managed only two goals four years ago in Russia, from Jan Bednarek and Grzegorz Krychowiak, and the team was eliminated from the group stage with losses to Senegal and Colombia.
Poland, ranked No. 26 in the world, didn’t even make the 2010 or 2014 World Cups and the team hasn't advanced to the knockout round since 1986. Poland’s best finish was third place in West Germany in 1974 and in Spain in 1982.
Lewandowski scored in the 2-0 playoff victory over Sweden in March, giving Poland a spot at the World Cup. He finished with nine goals in the qualification campaign.
Poland is coming off a 1-0 victory over Chile last week in a final warmup match before the opener against Mexico at Stadium 974. While third-ranked Argentina is the favorite to win Group C, which also includes Saudi Arabia, Tuesday's match could be a good indication of the second team that moves on to the knockout stage.
Also Read | Iran chose not to sing anthem at World Cup opener in solidarity with protesters
“This is an important game for us. It’s important that we show confidence. We know Mexico play high quality soccer, we know their potential. We’ll fight to win and we’ll do our best,” Lewandowski said in Doha last week. "They have a lot of quality and pace, and are dynamic. We’ll have to be ready to stop them causing us problems.”
Mexico has been beset by uncertainty and injuries. Coach Gerardo “Tata” Martino included Wolverhampton Wanderers striker Raul Jimenez, who has been dogged by a groin injury but came off the bench in a 2-1 loss to Sweden last week. It was his first game since August.
Although there were hopes Sevilla forward Jesus Corona could recover from a fractured fibula before the World Cup, he was ultimately left off Mexico’s final roster.
But there were a couple of other notable absences. Martino left off young forward Santi Gimenez, who plays for Dutch team Feyenoord, as well as Mexico’s all-time leading scorer, Javier “Chicharito” Hernandez, who hasn’t played for his national team since 2019. Hernandez, who currently plays for LA Galaxy, had played in the last three World Cups.
Martino has faced criticism for both the team's recent results and his roster decisions.
“The only thing that can change people’s opinion are the results and that’s what we’re going to play for," he said following the loss to Sweden.
Mexico finished second in CONCACAF qualifying behind Canada — and ahead of the United States — but Martino’s team scored only four goals in its final five qualifying matches despite having both Jiménez and Corona available. El Tri went winless against Canada and the United States during the final round.
Four years ago in Russia, Mexico lost to Brazil 2-0 in the round of 16, marking it the seventh straight time that the team has failed to reach the quarterfinals at soccer’s premier tournament. The failure to advance to the “quinto partido,” or fifth game, has dogged El Tri.
Mexico has reached the quarterfinals only twice, first in 1970 and again in 1986. Mexico hosted both of those tournaments.
Mexico vs Poland Team News
Mexico Team News: Raul Jimenez's fitness has been a major concern for Mexico with the striker nursing a groin injury. However he turned out for the team in their warm-up game and should be available to start.
Poland Team News: No major injury concerns for Poland and head coach Czeslaw Michniewicz will have a full squad available for selection against Mexico.
Form Guide: (Last five matches, most recent first)
Mexico: L-W-L-W-L
Poland: D - L - L - W - W
Betting Odds: (Bet365)
Mexico: 2.70
Poland: 2.87
Draw: 3.00
Predicted Line-Ups:
Mexico Possible Starting 11 (4-3-3): Ochoa, (Kevin) Alvarez, Moreno, Arteaga; (Edson) Alvarez, Guardado, Rodriguez; Lozano, Jimenez, Vega.
Poland Possible Starting 11 (3-5-2): Szczesny, Glik, Kiwior, Bednarek; Cash, Krychowiak, Zurkowski, Zielinski, Zalewski; Szymanski, Lewandowski.
Where to watch and match timing:
The match will kick off at 9:30 PM IST and will be beamed live on Sports18 and Sports18 HD. Fans can also stream the action online on JioCinema’s official website.
(With Agency Inputs)
Check out our in-depth Market Coverage, Business News & get real-time Stock Market Updates on CNBC-TV18. Also, Watch our channels CNBC-TV18, CNBC Awaaz and CNBC Bajar Live on-the-go!