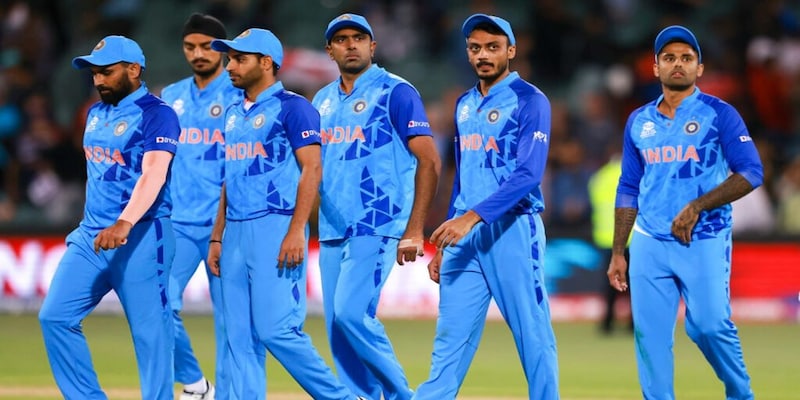 India didn't turn up in the England innings as they never looked like taking wickets rather containing the English openers. Even while batting, they lacked intent and played very slowly in the first 15 overs.

It was the second semifinal of the T20 World Cup 2022 between India and England at the Adelaide Oval on Thursday, November 10 and it seemed the Men in Blue didn’t turn up for the second innings. It was a case of abject surrender from Team India.

Wins and losses are part and parcel of sports, but the manner in which one loses sums up everything. And India just didn’t show any fight with the ball. But it wasn’t just while bowling that they underperformed. India’s batting also never got going. And if it wasn’t for Hardik Pandya’s blistering innings (63 off 33) towards the end, India wouldn’t have even reached 168/6 after 20 overs.
Where it went wrong with the bat
India’s performance in the powerplay had always been under scrutiny throughout this tournament. Prior to the tournament, India had been practising to ‘go hard’ at the bowling right from the word go, ‘intent’ was also one of the commonly used words, but in the T20 WC, it wasn’t the case. The Indian openers struggled to give India starts and the semifinal was no different.
Aggressive before the World Cup changed to cautious at the top, and that cost India badly in the match which mattered the most. India were 38/1 after their powerplay. While KL Rahul departed for 5, Rohit Sharma played an innings of labour as he went back to the dugout after a 28-ball 27. England skipper Jos Buttler’s decision to tie Rohit and Virat Kohli down with the leg-spin of Adil Rashid and Liam Livingstone paid rich dividends.
The English tactics were on point and India paid the price of batting slowly for the first 15 overs. They were clearly 20 runs short of a par score. India’s top 3 scored 82 runs off 73 balls at a strike rate of 112. India just hit 6 boundaries in the first 10 overs whereas England hit 14 in the same phase. Clearly, the ‘intent’ was missing and it wasn’t a bilateral series match, it was the semifinal of the World Cup!
Where it went wrong with the ball
Right from the start. Jos Buttler hit Bhuvneshwar Kumar for three boundaries in the very first over of the England innings and that for some reason tempted Rohit Sharma to drop the point fielder in the deep and it got absolutely easy for the England openers as the bowlers pulled back their lengths and were not looking to swing the ball.
Arshdeep Singh, who had been in brilliant form in the tournament, was taken off the attack just after one over. Baffling tactics! The man who had bowled brilliantly in the powerplay was just given one over in the same period. And that too, when both Buttler and Alex Hales are susceptible to the ball swinging in.
The pressure was never created and England got off to a flying start. The Men in Blue’s tactics were very defensive and not looking to take wickets cost them dearly. On a pitch where England spinners put brakes on the scoring  rate by turning the ball, Axar Patel was busy darting the ball instead giving it air and getting help from the track. Indian bowlers’ line and length were also all over the place.
A story of contrasting powerplays
England openers showed how one bats with intent and that you need to go hard in the powerplay. It was a case of two contrasting powerplays that sum up where India lost the match! India were 38/1 after 6 overs whereas England were 63/0 in the same period. And that 63/0 became 170/0 in just 16 overs, which proves how brilliant England were and how toothless India were. A 10-wicket win with four overs to spare is an absolute decimation and India need to do some soul-searching after failing in the knockout of a World Cup yet again.
Also Read | 'English tea or masala chai': Zomato tweets UK PM Rishi Sunak on India vs England semi-final
Check out our in-depth Market Coverage, Business News & get real-time Stock Market Updates on CNBC-TV18. Also, Watch our channels CNBC-TV18, CNBC Awaaz and CNBC Bajar Live on-the-go!