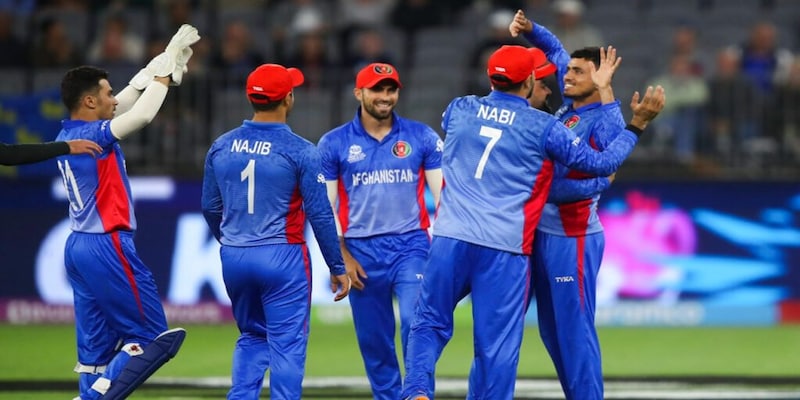 Both Sri Lanka and Afghanistan, are languishing at the bottom of the table in Group 1 of the Super 12 stage. A win would keep Sri Lanka's semifinal hopes alive. On the other hand, Afghanistan is still searching for their first win in the tournament.

It’s the battle between the bottom two teams of Group 1 as Afghanistan take on Sri Lanka in match 32 of the T20 World Cup 2022 in Brisbane on Tuesday, November 1. The Lankan tigers would look to keep their semifinal hopes alive and the Afghans would try to get their first win of the tournament.

Both teams have two points each after 3 matches but Afghanistan are yet to win their first match. The two points earned by them are due to washouts against New Zealand and Ireland respectively. They lost their first match against England by 5 wickets. They have the firepower in their bowling attack and can trouble any side on their day. But it’s their batting which needs to kick if they are to win against Sri Lanka. Rahmanullah Gurbaz and Ibrahim Zadran need to come good at the top of the order to give their team a solid foundation.
Also Read |
'NOT okay with this', says Virat Kohli on Instagram viral video of his hotel room
Sri Lanka, on the other hand, have had a hot and cold tournament so far. After losing to Namibia in the qualifying stage, they put up a clinical show to progress to the Super 12. They won their first encounter of Super 12 against Ireland convincingly by 9 wickets. But they’ve lost their last two matches rather comprehensively too. 7-wicket defeat against Australia and a 65-run loss to New Zealand are nothing less than abject surrender!
Apart from injuries, it’s their fielding too, which has been a cause for concern. As far as their batting is concerned, against the Black Caps, only Bhanuka Rajapaksa and skipper Dasun Shanaka reached the double figures.
In the match-up against the two Asian countries, it seems that whichever team bats better will walk away with the win at the Gabba!
Also Read | India vs South Africa T20 World Cup 2022 Highlights: David Miller powers SA to victory in thriller at Perth
Form Guide (last five matches)
Afghanistan: NR-NR-L-L-L
Sri Lanka: L-L-W-W-W
Afghanistan vs Sri Lanka (Head to Head)
Matches played: 3
Afghanistan: 1
Sri Lanka: 2
Pitch
The Gabba pitch generally favours bowlers and with overcast conditions, the fast bowlers will be licking their lips. Batters need to apply themselves to score on this track.
Weather conditions
There are chances of rain in Brisbane on Tuesday. At the time when the match is scheduled to start, it will be cloudy with rain to follow. Having a full game seems unlikely. The temperatures will hover between 23° C to 14° C.
Possible XIs
Afghanistan possible XI
Hazratullah Zazai, Rahmanullah Gurbaz (WK), Ibrahim Zadran, Usman Ghani, Najibullah Zadran, Mohammad Nabi (C), Azamutullah Omarzai, Rashid Khan, Naveen-ul-Haq, Fareed Ahmad, Fazhalhaq Farooqi
Sri Lanka possible XI
Pathum Nissanka, Kusal Mendis (WK), Dhananjaya de Silva, Charith Asalanka, Bhanuka Rajapaksa, Chamika Karunaratne, Dasun Shanaka (C), Wanindu Hasaranga, Mahesh Theekshana, Kasun Rajitha, Lahiru Kumara
Top Fantasy Pick suggestions
Batters: Ibrahim Zadran, Charith Asalanka, Bhanuka Rajapaksa
Wicketkeeper: Rahmanullah Gurbaz, Kusal Mendis
All-rounders: Mohammad Nabi, Dasun Shanaka
Bowlers: Fazhalhaq Farooqi, Rashid Khan, Mahesh Theekshana, Kasun Rajitha
Betting Odds (bet365)
Afghanistan: 2.50
Sri Lanka: 1.53
Where to watch
The match begins at 9:30 AM IST.  In India, the match will be broadcast on the Star Sports Network. Online viewers can follow the live action via Disney+Hotstar.
(Edited by : Abhishek Jha)
Check out our in-depth Market Coverage, Business News & get real-time Stock Market Updates on CNBC-TV18. Also, Watch our channels CNBC-TV18, CNBC Awaaz and CNBC Bajar Live on-the-go!