Updated : June 30, 2018 00:09:45 IST
R2O introduces global gourmet dining to a city known for traditional seafood eateries.
It houses India’s first champagne and caviar bar.
The produce is sourced from the best coastal cities of India and the world.

Zorawar Kalra, the restaurateur who has launched some of India’s best-known concept restaurants, is back in Mumbai with a new seafood diner.

In a city ruled by Mahesh Lunch Home, Trishna and Gajali that focus on recipes drawn from India’s rich repository of coastal culinary heritage, Zorawar’s new brand will be driven by upscale dining.

“A seafood lover’s city like Mumbai, from where some of the best produce comes, has no great seafood fine-dine that serves global cuisine. All over the world, the most expensive restaurants either serve seafood or are steakhouses.” Conceputalised by 41-yea-old Zorawar and his wife, Dildeep, and designed by Tokyo-based architect Masafumi Sanada, the décor complements the cuisine: the interiors are all blue, white and sea-green. The art pieces evoke the beauty of the ocean world.

R2O has a lot of firsts to its credit: its state-of-the-art freezers can chill up to a ton of fish and seafood at -80 degrees celsius. It hosts the country’s first champagne-and-caviar bar, with over 17 champagnes, each served in a wineglass or goblet befitting the bubbly, and a caviar menu that includes Beluga and Sevruga. And it is a rare restaurant that offers at least three Tasting Menus, including a raw tasting menu.

The kitchen is helmed by Chef Varun Kinger and his team of 26 chefs. The team travelled to several coastal cities to curate a menu that is as multi-cultural as the city it is located in.

Here are some of our choice picks: Cured salmon and tuna poke, served with seasonal greens and topped with garlic and yuzu mayo, fish roe and nuts. Chardonnay-soaked mussels cooked with parsley butter. Truffled red lobster topped with grated Parmesan, with sides of melted lemon butter and leeks. 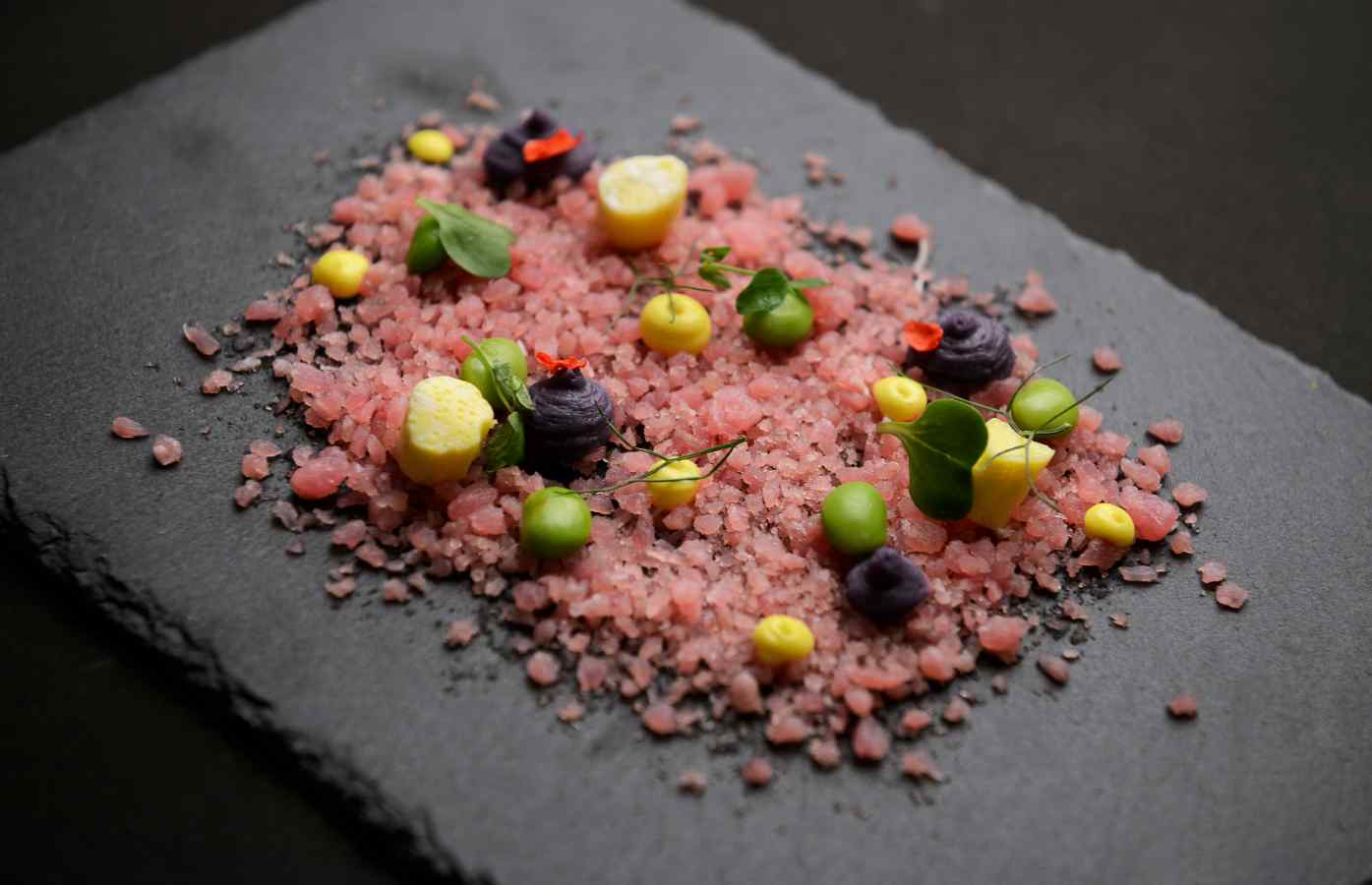 The Tiger Prawn Thermidor, a classic French delicacy, is a creamy blend of cooked prawn and yolks. The amuse bouche is a Yuzu-flavoured caviar.  The Malabar Crab Curry and the Butter Pepper Garlic Prawns are the only Indian dishes on the menu. From his own menu, the restaurateur recommends the cold Hamachi and Caviar plate (hand-pounded seasoned hamachi served with selection of caviar, avocado tartare and spring onions).

Zorawar, whose first memory of seafood included dining on anchovies, says that every diner will be handed out a beautifully illustrated page documenting the antecedents of the produce, along with the menu. The food served here straddles an entire spectrum, from fresh river catch to the deep oceans. 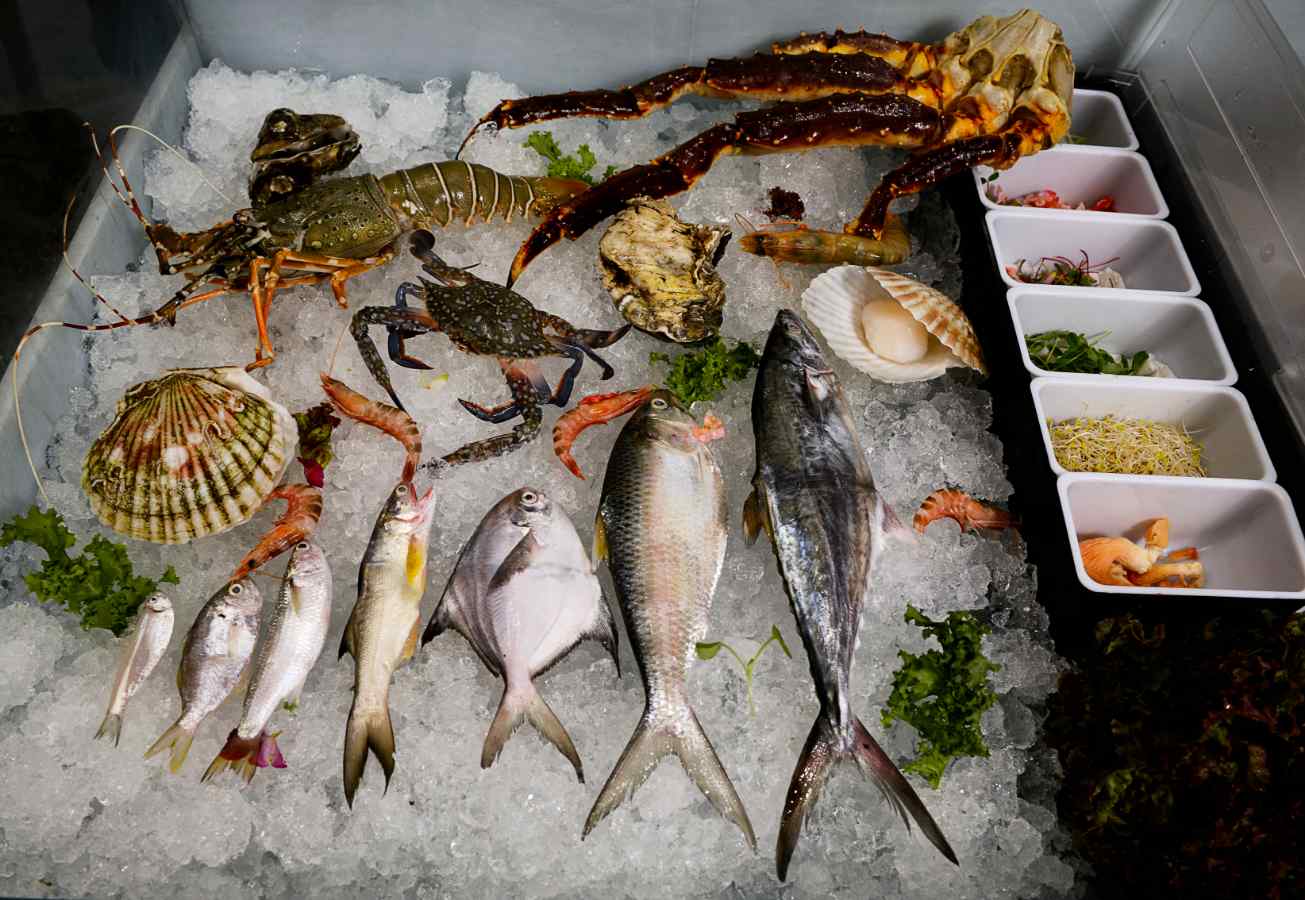 The squids, prawns, clams and lobsters come from either the coastal stretches of Konkan or Mumbai. The scampi has been cultivated in the farms of Andhra Pradesh. The Hamachi and Hokkiado Scallops are sourced from Japan. The Tuna has been harvested from Port Lincoln Harbour in south Australia, while the delectable Black Cod is from the Gulf of Alaska. The soft-shell crab is from Indonesia and the salmon is from farms in Norway. The mussels come from Cape Regina in New Zealand.

But what left us surprised was Gujarat as a source for tiger prawns and huge oysters. “The Gujarat coast is fertile in oysters and prawns. Being a largely vegetarian-eating people, they send out most of their seafood produce to Mumbai, or export it,” Zorawar tells me over lunch. “You can actually taste the sea in your mouth if you eat the oysters or the tiger prawns. We place an equal focus on harnessing produce form our local fisheries.”

An equal amount of attention has been paid to curating the vegetarian menu. The Mushroom and Truffle pate on Melba toast is buttery and melts in the mouth. The reconstructed bell pepper and corn quesadilla is crisp and beautifully flavoured, while the homemade corzetti is served with wild mushrooms and stuffed morels. “Palladium is surrounded by a lot of neighbourhoods where vegetarians dominate,” says. “So the vegetarian menu is as extensive as the seafood.”

Zorawar is fabled for his high-profile concept restaurants. He grew up in the shadows of his father, Jiggs Kalra, the famous food impresario, former food writer and a global ambassador of fine Indian cuisine.

Zorawar, who joined him in 2005 to revitalize Punjab Grill, their Punjabi gourmet restaurant, launched two fabulous new concepts in 2011, under the aegis of his company, Massive Restaurants.

Made in Punjab is his take on plated and upsaled Punjabi food. But it is with Masala Library—a luxury fine dine where he took the risk of applying molecular gastronomy concepts to modern Indian cuisine—that Zorawar came into his own. “No one believed it would work. You cannot walk into Masala Library. You had to make an appointment. And you had to finish your meal in two hours. Everything is beautifully coordinated so you still eat at a leisurely pace and enjoy the experience.”

Since then, through an extensive network of restaurants and concept cafes, Zorawar has changed the food game. Farzi Café introduced light and quirky ‘Millennial Indian cuisine’ to India. Bo Tai and Pa Pa Ya took concept Asian cuisine to another level. And now, R2O introduces Mumbai to a whole new version of seafood.

Last year, Zorawar even landed an investment of Rs 160 crore from mid-market private equity firm Gaja Capital to back his expansion plans. “If R2O works, we will take it to London,” he promises.

Deepali Nandwani is a journalist who who keeps a close watch on the world of luxury.
Tags Luxury Restaurant Seafood unwind
Published : June 30, 2018 12:02 AM IST