Updated : March 08, 2019 16:34:36 IST
Grandma Lynn – or Gama Lynn as mentioned on her business card, all designed by her teenage granddaughter – says she had a flair for the arts right from school but life got in the way of her passion.
Bringing up her kids, Gama Lynn says she “shelved” all of her artistry.
But it was years later, during her marriage, when the Fernandes family bought a farmhouse in Kamshet, Mawal, that the artistry took true form.

An African woman sits bent over her knees with her dress undone. Wearing a loose blue and white checkered, traditional headwrap, she has a solemn look on her face – such is one of the hot-selling paintings of a septuagenarian artist, living in the suburbs of Mumbai.

Anna Lynn Fernandes fashions a canvas not only out of coarse white cloth but also out of cabinet doors, cupboards, cushion covers, drawers and even rocks. Though the painting of the African woman, along with every other painting hung in her spacious two-bedroom flat in Khar, is signed – 'Gama'. "My grandchildren couldn't pronounce the word 'Grandma' and called me 'Gama' instead. So I decided to use that as my artist name," says the 73-year-old.

Grandma Lynn – or Gama Lynn as mentioned on her business card that has bamboo canes and shoots on it, all designed by her teenage granddaughter – says she had a flair for the arts right from school but life got in the way of her passion. “I've always liked painting and I wanted to join JJ School of Arts when I was young, but we couldn't afford it then. And after I got married, we [my husband and I] didn't have time to look at each other's flairs,” she quips. It was a year after the passing of her spouse, four years ago, that she found a painting. A private art tuition class in the midst of Bandra is where Gama Lynn now goes to perfect the nuances of the trade. “It’s been three years now and my teacher is often baffled at how I got my own exhibition (at Bandra Gym's Christmas Bazaar in 2018) in such a short span, but I guess it was just the suppressed artist in me who finally got a chance to bloom,” she smiles.

Unable to pursue art before retirement, Gama Lynn says she freelanced for Wizcraft, a communication and entertainment company, where she’d plan all their theme parties, create costumes and emcee for the children's parties as well. Elaborating on her work experience, she says, “The Santacruz gymkhana used to have a carnival once a year, which I would do shows for. We also got invited to the American and British embassy to do the same shows. Working for Wizcraft, I put up shows regularly for 15 years.”

‘The women speak to me’

Bringing up her kids, Gama Lynn says she “shelved” all of her artistry. Though her daughter, now staying in Doha, disagrees. “My mother paints on anything, be it walls, cabinets or rocks,” says Gama Lynns's 49-year-old married daughter, Sharon Menezes, who then laughs about how her mother did all her art homework in school. The green painted crockery cabinet has designs of bamboo shoots and leaves. A popular theme of artist Gama Lynn.

But it was years later, during her marriage, when the Fernandes family bought a farmhouse in Kamshet, Mawal, that the artistry took true form. “I couldn't find anything to paint on so I started painting rocks,” she says.

The first rock she painted was this artist's rendition of the Madona. Blue-eyed with a complementing celestial blue wrap, typical of the Madona, she lies among the colourful foliage in the garden of the one-storey house. 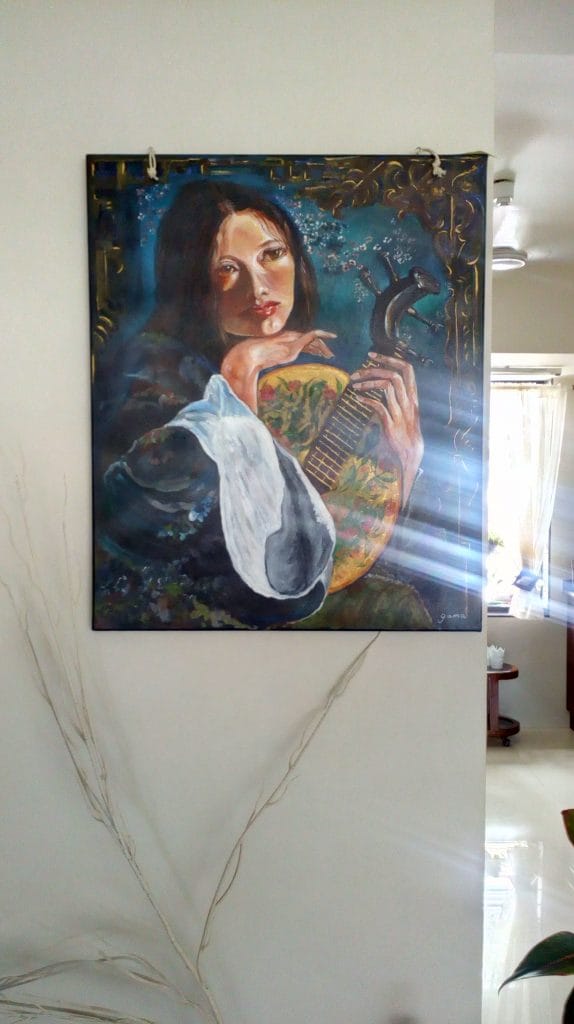 A painting of a Japanese woman, who appears to be daydreaming inside another photograph frame, showing her wrists to the world.

In her late 50s at the time, she soon began other rock paintings that included the Seven Dwarfs, a pond with fish swimming around, the family's pet dogs and cats who passed away, a sleeping man and his sleeping wife, and the Ganpati. The inspiration for these paintings would often stem from stories she heard from locals. “I heard this love story of Charudatta and Vasanti [Vasantasena], which I can't remember much of but I was fascinated with it and I painted them on big rocks,” she says. The two big rocks that now deceptively appear to look life-like, with Charudatta sitting with one hand on his knee and his dutiful wife, painted in a red sari, sits cross-legged next to him.  “Every time I saw stones, I could picture what I wanted to paint on them,” says Gama Lynn, who later sold the house when both her daughters migrated. The buyer, she says, insisted on buying the house with all the stone-artwork intact. When asked which artist inspires her, Gama Lynn says it's more about two ethnicities of African and Japanese women that she looks to for inspiration than any particular artist. Paintings of African women, where she uses bursts of colours, brings out her “wild side”, she says adding, “The spectrum of colour in these paintings reflects something in me.” While it's the Japanese women and culture that bring out the calm in her. Japanese gilded mirrors and cabinets with fly eave-looking edges are found around Gama Lynn's house, the tops of which have been painted with bamboo leaves and cherry blossoms or colourful birds. 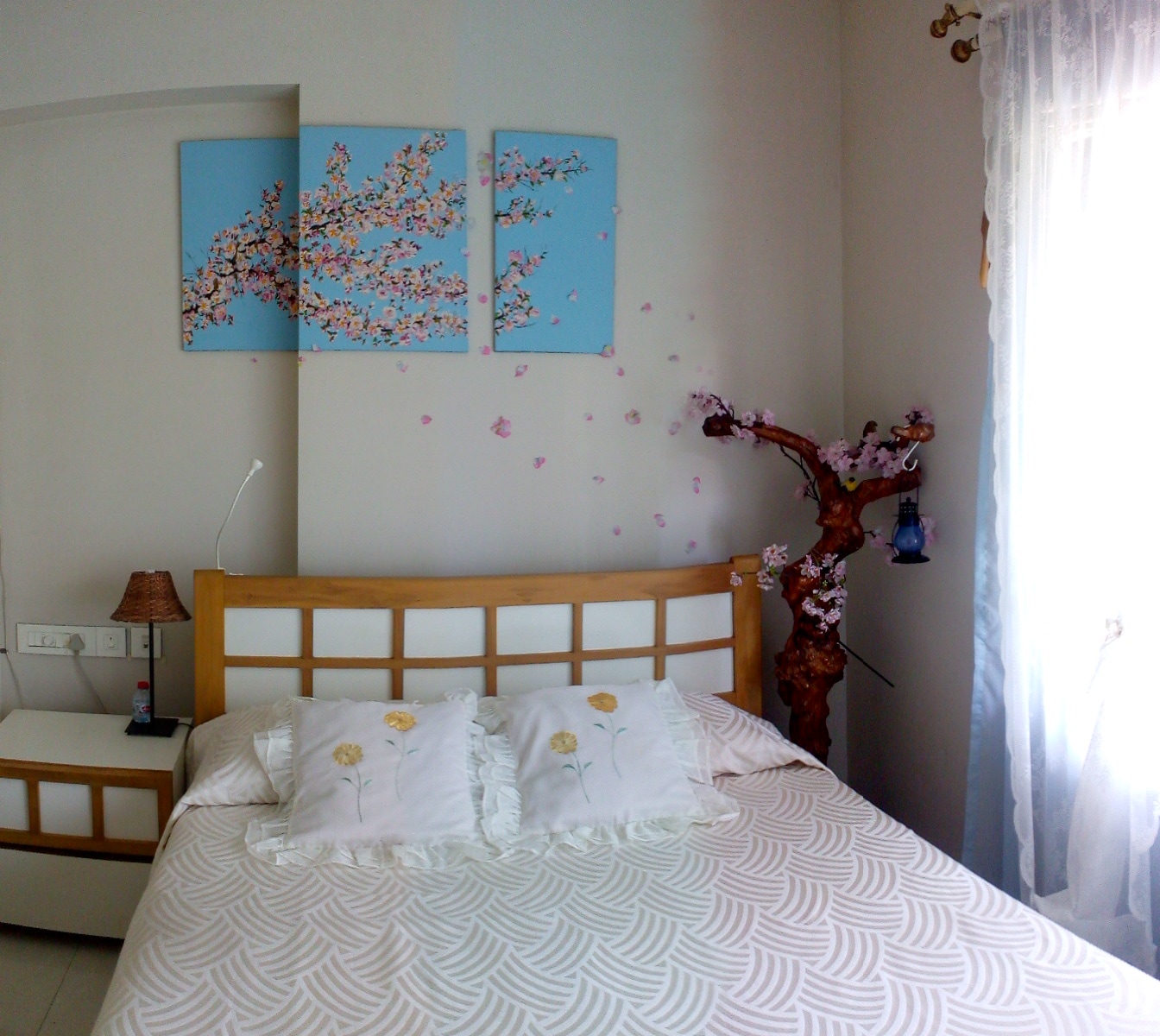 A cherry blossom plant, gives the effect that its petals are being blown onto the three separate canvases.

“Their culture's placement of rocks and twigs were fascinating,” says Gama Lynn, who's been to Japan a couple of times. Sharon adds that she had to watch a lot of Japanese TV programs growing up, but would never tire of her mother's love for cherry blossoms that now hangs artfully in  a 3D depiction in their Khar home's master bedroom, with petals of the flower flowing out of the painting and onto a replica of the tree. "I’ve read so many books on their culture to know why they never show their legs or feet,” says Gama Lynn, whose favourite painting is of a woman who appears to be daydreaming inside another framed photograph. The imagination of this artist is endless, with tiptoeing ballerinas reaching out of the canvas to kimono-clad Japanese women, who defy society by giving the world a glimpse of their hands.

At her first exhibition in the Christmas Bazaar, she sold six paintings that varied between Rs 25,000 and Rs 10,000 depending on size. Thereafter, her networking has helped her sell half a dozen more. Though most of her work, which can take up to 20 days to finish, are profiles of women, with the backs of a couple of Vietnamese men carrying water pails across their shoulders in the mix. “The women speak to me,” she asserts. 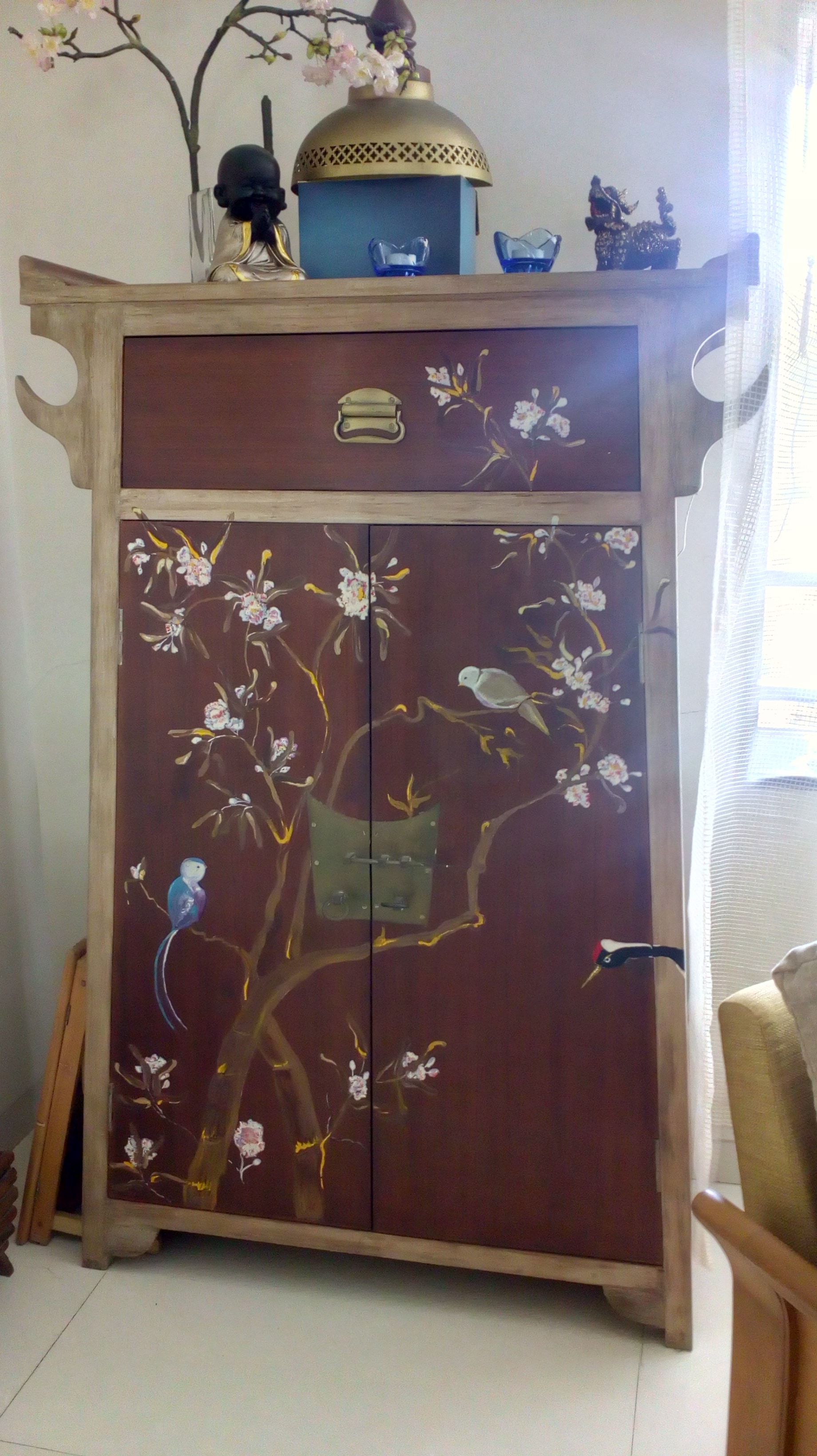 A cabinet with fly eave-looking edges is painted with the cherry blossom tree and birds perched on its branches.

Though on request from her clients, she will soon begin to paint more men but that may take a while. More than her upcoming projects and growing clientele, this artist smiles contently, almost as though she's privy to a secret. “Having reached this ripe old age and still finding something to do that brings me so much happiness is truly a blessing,” Gama Lynn concludes.