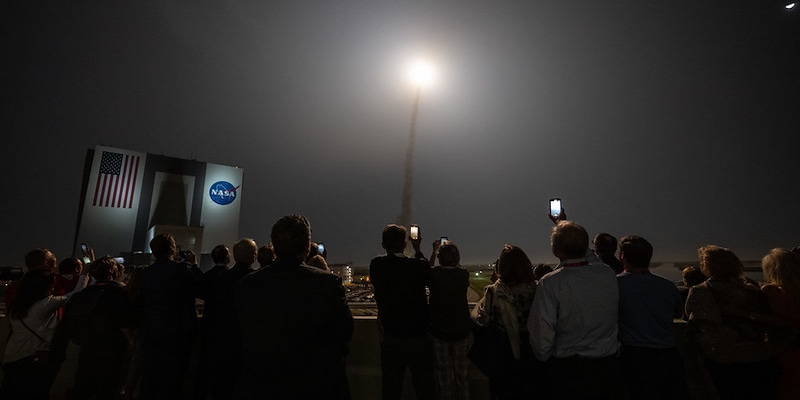 NASA's ambitious Artemis 1 Moon programme launched on Wednesday at 1:47 a.m. EST, that is 12:17 IST. This move brought the US a big step closer to putting astronauts back on moon for the first time since the end of the Apollo program.

NASA's ambitious Artemis 1 Moon programme is set to make its launch attempt on Wednesday. The Artemis 1 stack includes the SLS (Space Launch System) rocket and the Orion spacecraft, which took off from Complex 39B of the Kennedy Space Center at 1:47 a.m. EST, that is 12.17 PM IST.

The Orion spacecraft is expected to reach the moon by Monday, more than 230,000 miles (370,000 kilometers) from Earth. Earlier on November 14, a tropical storm, Nicole, postponed the launch of the Artemis 1 mission as it left the SLS rocket and Orion spacecraft with slight damage. The mission was postponed multiple times in the past due to various reasons.
The mission is a 25-day voyage around the moon and back without astronauts aboard at the cost of $4.1 billion. This mission is crucial for NASA's plan for lunar landing by a human crew as early as 2025.
Catch all the Live Updates here:
#Mission Goal
Artemis I mission's primary goals is to demonstrate Orion’s systems in a spaceflight environment and ensure a safe re-entry, descent, splashdown, and recovery prior to the first flight with crew on Artemis II.
#Mission facts
Mission facts as of November 16:
#Orion spacecraft separated
Orion spacecraft successfully separated from the Interim Cryogenic Propulsion Stage.
#Trans-Lunar injection burn
Trans-Lunar injection burn is complete, and the Orion spacecraft is on its way to the moon.

Moonbound! #Artemis I has completed its trans-lunar injection, a propulsive maneuver that accelerates the @NASA_Orion spacecraft to more than 22,600 mph (36,370 kph) and propels it on its path to the Moon. pic.twitter.com/1YMedHnJwH

#Lunar IceCube
Artemis 1 mission has Lunar IceCube with it whose mission is to find volatiles and water on the Moon’s surface and map their location using an infrared spectrometer. It has the world’s only propulsion system powered with iodine propellant.
#Orion completes Perigee Raise Maneuver
NASA said that the Perigee Raise Maneuver (PRM) has been successfully completed where it fired its ICPS RL-10 engine to raise the lower point of the spacecraft’s orbit (perigee).
#LunaH-Map
Lunar Polar Hydrogen Mapper (LunaH-Map) is a tiny spacecraft that will be travelling with Artemis I. It will embark on a 60-day mission that includes 141 orbits around the Moon to produce a detailed map of portions of the lunar surface by using neutron spectroscopy technology.
#Solar array deployed
NASA said Orion’s solar arrays have completed their deployment. Four solar arrays on the Orion spacecraft to provide power to leave the lunar orbit and make its way back to Earth.
#Core stage separation is complete
The main engine cutoff is complete, and the core stage has separated from the Orion spacecraft. The deployment of Orion’s solar arrays is scheduled to begin approximately 18 minutes after launch.
#Artemis 1 lifts off
The Artemis 1 mission’s SLS rocket lifted off from the Kennedy Space Centre at 12.17 PM IST. NASA said that the service module fairing and launch abort system have successfully separated from the Orion spacecraft.

For the first time, the @NASA_SLS rocket and @NASA_Orion fly together. #Artemis I begins a new chapter in human lunar exploration. pic.twitter.com/vmC64Qgft9— NASA (@NASA) November 16, 2022

#Launch time set
The mission management team and the Launch director has given "go" to proceed with the terminal count sequence.
#Determining new launch time
The Range Safety Officer is testing the Flight Termination System (FTS). NASA said that its launch team is determining the new launch time.
#Launch delayed
NASA said that the countdown will now take place at T-10 minutes. The ethernet switch has been replaced and will be verified.

We are in our planned hold at T-10 minutes. Currently, the upper stage liquid hydrogen is 78% filled. Core stage has been topped off – both liquid hydrogen and liquid oxygen are 100% filled. The ethernet switch has been replaced and will be verified.

#Upper stage in liquid hydrogen fast-fill
NASA said that upper stage is now in fast fill at 78 percent liquid hydrogen. Liquid oxygen tanks of both the core stage and upper stage are in stable replenish mode.
#Core stage liquid hydrogen tank being filled
Core stage liquid hydrogen tank is now being filled after the leak was fixed. NASA said that leak is not reoccurring and that engineers are back into liquid hydrogen fast fill operations on the interim cryogenic propulsion stage.
#NASA’s Range Flight Safety team flags new issue
NASA teams are working to solve an issue highlighted by its Range Flight Safety team. The Range team has said that a bad ethernet switch and is currently working on the issue. The team said that it will take around 70 minutes to fix this issue.
#Snoopy is all set to fly to the Moon
Astronaut Snoopy is no stranger to space. The Peanuts character skimmed the lunar surface as the name of the Apollo 10 lunar module & even caught a ride on the space shuttle. Now Snoopy is going to the Moon as a zero-gravity indicator aboard Artemis. Read more about this here.
#Launch team to check if leak has been fixed
The launch team will check the valves to determine if the leak has been fixed and resume launch countdown operations.
#Red crew fixes a leak in the core stage
The red crew has departed the launch pad and is now outside the nearby designated danger area. Technicians had entered the zero deck of the mobile launcher and tightened several bolts to troubleshoot a valve used to replenish the core stage with liquid hydrogen, which showed a leak.
#Engineers pause fuel flow due to a small leak
Engineers have paused flowing liquid hydrogen into the core stage because of a small leak on a hydrogen valve. NASA said it had mobilised a “red crew” team to fix this issue.
#NASA's official LIVE broadcast for Artemis I has begun

LIVE: NASA's official launch broadcast has begun for the #Artemis I mission. https://t.co/SfG1tKKQcW

#How to watch the live launch of Artemis-1?
NASA is streaming full coverage for the launch from 10.30 PM ET (9 AM IST). The live coverage for tanking operations started earlier at 3.30 PM ET on November 15 (2 AM IST on November 16). NASA’s official YouTube channel will stream the launch day events live. Additionally, NASA TV will be streaming on Facebook, Twitch, the NASA website, and in 4K on the NASA UHD channel.
You can watch the entire event through the link here.
Also Read: Who is Artemis? NASA's latest mission to the Moon is named after an ancient lunar goddess turned feminist icon
Check out our in-depth Market Coverage, Business News & get real-time Stock Market Updates on CNBC-TV18. Also, Watch our channels CNBC-TV18, CNBC Awaaz and CNBC Bajar Live on-the-go!