Lunar Eclipse 2022: Check when and where to watch

Lunar Eclipse 2022: Check when and where to watch 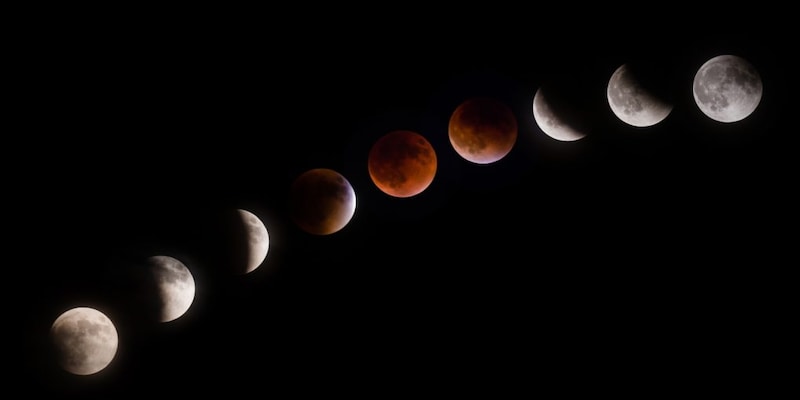 This will be the second and final lunar eclipse of 2022.

On November 8, 2022, the Moon will pass into Earth’s shadow and turn red. This will be the last total lunar eclipse for about 3 years, so be sure to check it out if it’s visible in your area.

Where will the lunar eclipse be visible?
The lunar eclipse in its totality will not be visible in all parts of the world. India, Pakistan, Afghanistan, parts of Russia, and residents of other parts of Asia, North and South America, Australia, North Atlantic Ocean will be able to view the eclipse.
ALSO READ: 15 of NASA's coolest inventions that make our lives easier
In India, the eastern parts including Kolkata, Siliguri, Patna, Ranchi, and Guwahati will be able to see the total lunar eclipse while other regions like Delhi will see the partial phase of the eclipse.
Timing
The partial eclipse of the moon will begin around 14:39 hours (IST) and will reach its totality phase around 15:46 hours on November 8.
The eclipse in terms of the darkness will peak at 16:29 hours.
The total eclipse will end at around 17:11 hours and the partial eclipse will end around 18:19 hours, India.com reported.
New Delhi will experience a partial eclipse from the moonrise at around 17:31 hours.
In Bengaluru, the moonrise will be at 17:57 hours with 23 percent of the moon obscured by the earth's shadow.
Mumbai will witness the partial eclipse around 18:03 hours with only 14 percent obscuration of the moon’s disk.
In Kolkata, the moonrise will be around 16:52 hours and the eclipse will be completely visible by 16:54 hours.
ALSO READ: ISRO successfully carries out key test of its heaviest rocket's engine
Cities like Kohima, Agartala, and Guwahati will observe the total eclipse earlier than Kolkata at around 16:29 hours when the moon will cross the darkest part of the earth’s shadow.
In Nagpur, the moonrise will be around 17:32 hours and 60 percent of the moon’s disc will be obscured at around 17:34 hours.
How to watch the lunar eclipse?
No special equipment will be required to watch the lunar eclipse as it will be visible to the naked eye. Binoculars or a telescope can be used for a better view. The lunar eclipse on November 8, will also be streamed live on NASA’s YouTube channel.
(Edited by : Sudarsanan Mani)
Check out our in-depth Market Coverage, Business News & get real-time Stock Market Updates on CNBC-TV18. Also, Watch our channels CNBC-TV18, CNBC Awaaz and CNBC Bajar Live on-the-go!