Why Retail stands out as a verticle for Reliance

In terms of share price growth, RIL surged 45.37 percent in 2 years, 125.50 percent in 3 years and 132.68 percent in last 10 years. The outstanding growth is primarily a reflection of robust performance from its retail and petrochemical segments and fresh entry into the telecom segment. Continued growth in the major segments like retail, telecom and petrochemicals will lead to higher value creation for investors. 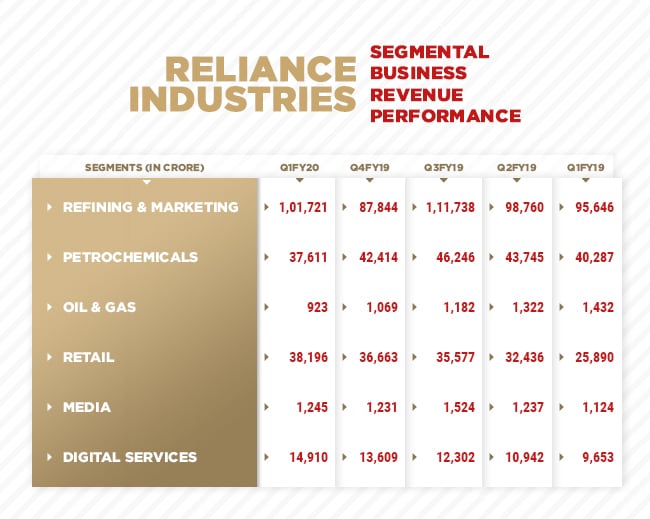 Established in 2006, Reliance Retail stands at the 3rd position in terms of contribution to sales, it remains the best segment performer amongst all six RIL business divisions. Reliance Retail manages 11 brands under its broader umbrella and operates about 10,644 retail stores in over 6,700 cities covering 23 million sq ft area and 516 petro retail outlets, as on June 30, 2019. In Q1FY20 alone, it opened 265 stores. While comparing RIL's segmental business revenues, it was seen that Reliance Retail maintained a stronger revenue growth as compared to others. In the June quarter this fiscal, Reliance Retail saw a jump of 47.5 percent in its revenues to Rs 38,196 crore as against Rs 25,890 crore made during the corresponding quarter last year.

While, oil & gas slipped in terms of revenue, digital services (Jio) saw a jump of 54.5 percent in revenue growth during quarter ended June 30, 2019.

The business has achieved a revenue CAGR of 55 percent and EBITDA CAGR of 76 percent over the last five years. Reliance Retail has formed several long-term strategic partnerships which adds significant value to its offerings across all consumption baskets.