This award-winning designer makes jewellery with a message for women: “Be fierce, be fearless”

Updated : October 05, 2018 11:59 PM IST
Her business model evolved – from two fashion shows a year to an experiential exhibition to just one collection with personalised kits for key buyers and journalists every year.
As a hobby, the handicraft-lover had been working with artisans to retail handmade jewellery after a bit of design intervention from her side.

A tree overlooks the window of Eina Ahluwalia’s room at her Kolkata house. One day, 15 years ago, she came home early from work and it struck her that it had been four years since she’d seen that tree. “I’d be out of my house at 8 am and back home well after dark. I’d never see sunlight. I never got long breaks to go trekking with my sister. Did I really want this life?” reminisces the award-winning conceptual jewellery designer.

Turned out, she didn’t.

Armed with a B.Com from a girls’ college in Kolkata and an MBA in marketing from Mumbai, Eina’s short corporate career came to an abrupt end that day. She was only in her 20s; she decided to focus on things she loved.

It happened to be jewellery. As a hobby, the handicraft-lover had been working with artisans to retail handmade jewellery after a bit of design intervention from her side. Having decided to make a profession of it, she attended various jewellery fairs and workshops around the world to educate herself and, in 2003, she launched her own label, Breathing Space. 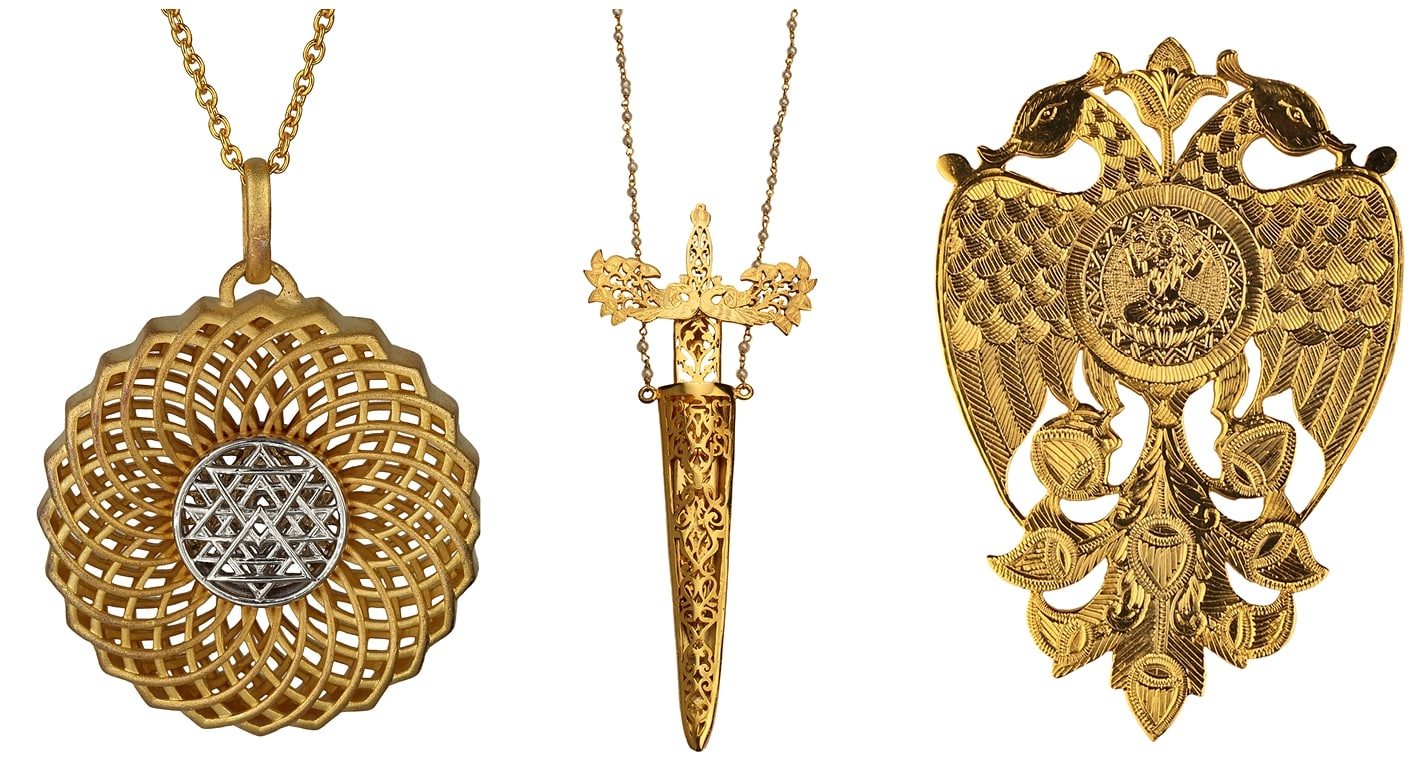 L-R): Dual-plated Heart of the Crown necklace, handcrafted Sword of the Light pendant and Noble brooch.

After six years doing business by herself, she was joined by her sister Atikaa who would go on to streamline the operational side of the business. Her sister’s support left her with time to study the psychology behind jewellery and the correlation between gender and jewels.

That was the time she came upon conceptual jewellery, a rage in Europe. Eina went on to train under conceptual jewellery artist Ruudt Peters in Holland and studied at Alchimia Contemporary Jewellery School in Florence. Back in India, she designed a collection using felt – pieces that dealt with feelings – and then made another collection, ‘Containment’, using blown glass. David Lamb, MD, Jewellery, at World Gold Council, picked her as one of the hottest talents to watch out for.

But sales eluded her. “Though European buyers at Lakme Fashion Week bought those pieces as a kind of wearable art, nothing sold in India. I was so frustrated,” recalls Eina, whose curly locks have unabashed specks of grey and whose simple clothing defies the glamour of the industry she’s associated with. “The market in India just wasn’t evolved enough. Jewellery still has to be ‘pretty’ and wearable,” she learnt. And so, ‘Wedding Vows’ came about. Considered one of Eina’s most memorable and successful collections till date, almost every woman could relate to the message in the gold-plated silver pieces that called out words like ‘Love’, ‘Respect’ and ‘Protect’.

It also included the now iconic ‘Kirpan’ necklace and Saxon-knife inspired earrings to invoke the protection of the goddesses against domestic violence. A bold assertion for Indian brides.

Over the next decade, Eina experimented with various other themes – peace, personal transformation, freedom, oneness, self-worth. One collection drew inspiration from large-sized ancient goddesses – indications that size zero was only a temporary fad in defining parameters of the ideal human body. Another one drew inspiration from cross-border politics. 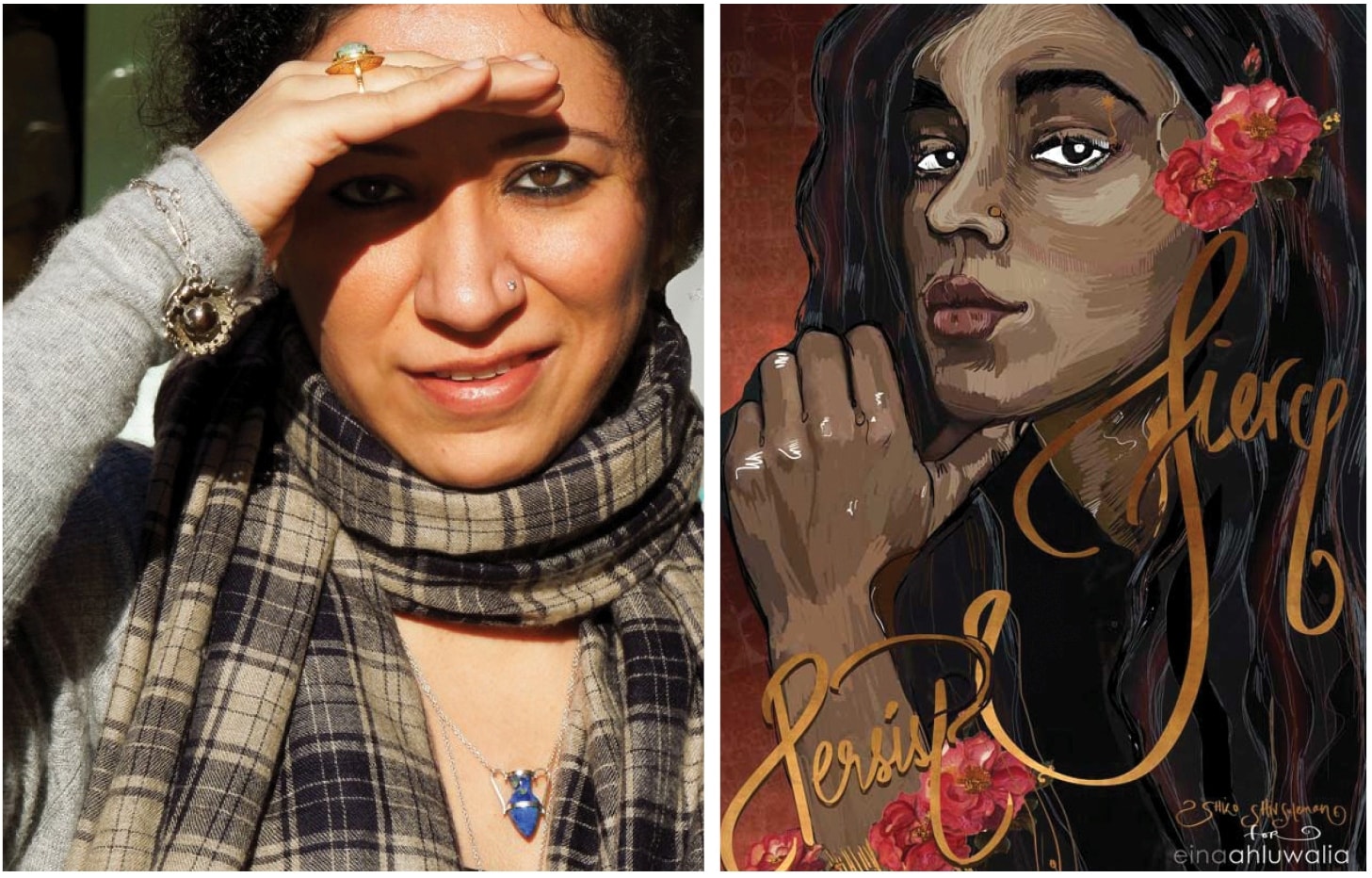 L-R: Eina on holiday in Nice, France; her new series of wearable reminders – with a cover designed by visual artist Shilo Shiv Suleman – tells women to be fierce and “stop putting up with bullshit”.

Her business model evolved – from two fashion shows a year to an experiential exhibition to just one collection with personalised kits for key buyers and journalists every year. She went from selling in multi-brand retail outlets to having her own e-store.

Her brand ambassadors went from models to ‘real’ women such as Rhea Gupte, a 24-year-old photographer and digital artist. And her buyers and the industry began accepting her way of doing things.

“I’m not overly ambitious. I don’t seek or need fame; it’s useful but it doesn’t define happiness for me,” says Eina, who is “happiest at home in pajamas”. Somewhere in her 30s, she realised she didn’t want to marry just for the sake of it. “The baggage of marriage and kids is just too much,” she chuckles while admitting that she can only say so now that she’s in her 40s and in a comfortable relationship. “You feel shitty in those parts while you’re still growing out,” she confesses. “The trade-off wasn’t easy.”

This year, Eina got fatigued with the pressure of coming up with a big collection every year and decided to do it differently. So, she came up with smaller collections and series including one made in collaboration with Swarovski.

“I have the luxury of doing what I love and still make enough money to live a good life, while adding meaning to my craft,” says the non-conformer. Her latest collection, with a cover designed by visual artist Shilo Shiv Suleman, tells women to “stop putting up with bullsh*t and be fiercely irrepressible.”

She looks ahead with optimism. “You have so much more energy and time as you grow older,” she avers. The future is full of possibilities, especially for the fearless.