Patanjali says it has clocked record revenues in H1FY20. Here is what could have worked

Updated : November 20, 2019 01:12 PM IST
A series of missteps, particularly the inconsistent quality of products due to breakneck expansion, have put paid to Baba Ramdev's ambitions.
Patanjali says the bottlenecks impeding growth have been resolved. So much so that the company is now eyeing revenues of Rs 10,000 crore in FY20.
If Patanjali is targeting revenues of Rs 10,000 crore at the end of FY20, it will need to clock about Rs 6,500 crore in the second half of FY20.

“We consider FY18 to be a resting period for Patanjali Ayurved,” said the consumer goods company’s promoter Acharya Balkrishna in an exclusive interview to CNBC-TV18 in June 2018.

FY19 turned out to be no better. Revenues of Patanjali, founded by yoga guru and entrepreneur Baba Ramdev, ticked up a measly 2 percent at Rs 8,329 crore over the previous financial year.

Revenues also fell short of the Rs 9,013 crore that Patanjali Ayurved reported in FY17 and were way below the ambitious targets set by the company previously.

Not long ago, customers were picking up by the hordes Patanjali’s affordable, home-made products such as honey, coconut oil, soaps and ayurvedic remedies. Patanjali was giving foreign companies in India a real run for their money.

Ramdev began to dream big. But a series of missteps, particularly the inconsistent quality of products due to breakneck expansion, put paid to those ambitions. The company has flagged the demonetisation of high value currency and the transition to the goods and services tax (GST), which upset economic activity, supply chain, as well as distribution as the vital reasons for its muted performance.

But Patanjali says that these bottlenecks, including distribution glitches, have been resolved. So much so that the company is now eyeing revenues of Rs 10,000 crore in FY20, according to interviews with people familiar with the matter. They did not want to be identified.

Patanjali has made significant progress towards this goal in the first half of FY20, these persons said. Provisional figures suggest that the company has clocked sales of about Rs 3,562 crore, a record for the company, they said.

Given that the company reported revenues of Rs 2,513 crore in the first half of FY19, this reflects a year-on-year growth of 40 percent. What explains this surge?

Before that, let us compare Patanjali’s numbers with those of the rest of the FMCG industry. The top FMCG companies in India reported a 6-7 per cent revenue growth in the first half of FY20 (see How Other FMCG Firms fared). 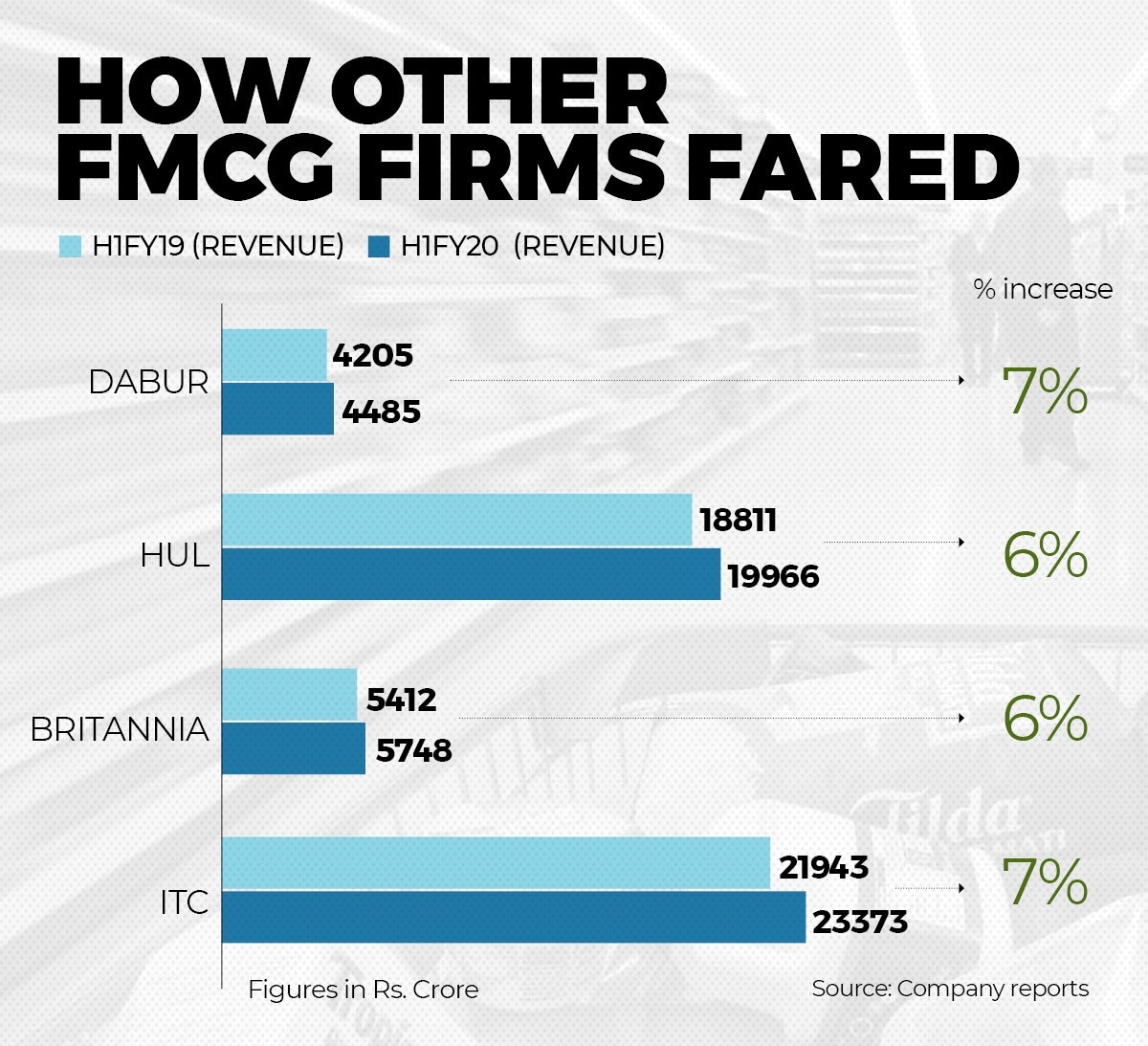 Stacked against these numbers, Patanjali’s dizzy performance makes it a rank outlier, especially when there is increased chatter of a serious consumption slowdown.

What could have happened?

Looking at Patanjali Ayurved’s growth trajectory over the last couple of years, distributor channel checks and market share data, it appears that a significant chunk of growth for the company has been efficiency linked.

Over the last two years, the company has been overhauling its supply chain and distribution network. The company previously told CNBC-TV18 that it took time to align itself to the new GST structure and therefore it had faced supply chain related challenges.

Distributors said the company has significantly cleaned up its inventory. In other words, expired products were weeded out and the availability of popular products was improved. As a result, the demand–supply mismatch that has been hobbling the company for the past couple of years was rectified.

Pricing may have also played an important role in burnishing the growth numbers. For instance, for the first time ever, the company launched special offers, discounts and combo packs for several products in their food and personal care umbrella. In the June-July period, the company launched offers like ‘Buy 3, Get 3 free’ and ‘50% off’ on select food categories.

“The company also went through an internal restructuring which led to a slight drop in revenues as some portions of the business moved out to other group entities,” said a company official, without revealing further details of the transaction. But owing to this restructuring, analysts that CNBC-TV18 spoke to say quarters may not be exactly comparable.

When contacted, Patanjali said it has fixed supply chain issues and plugged distribution gaps. The company is now consolidating presence in its existing product portfolio, a spokesperson said, adding that FY20 will be better than FY19. 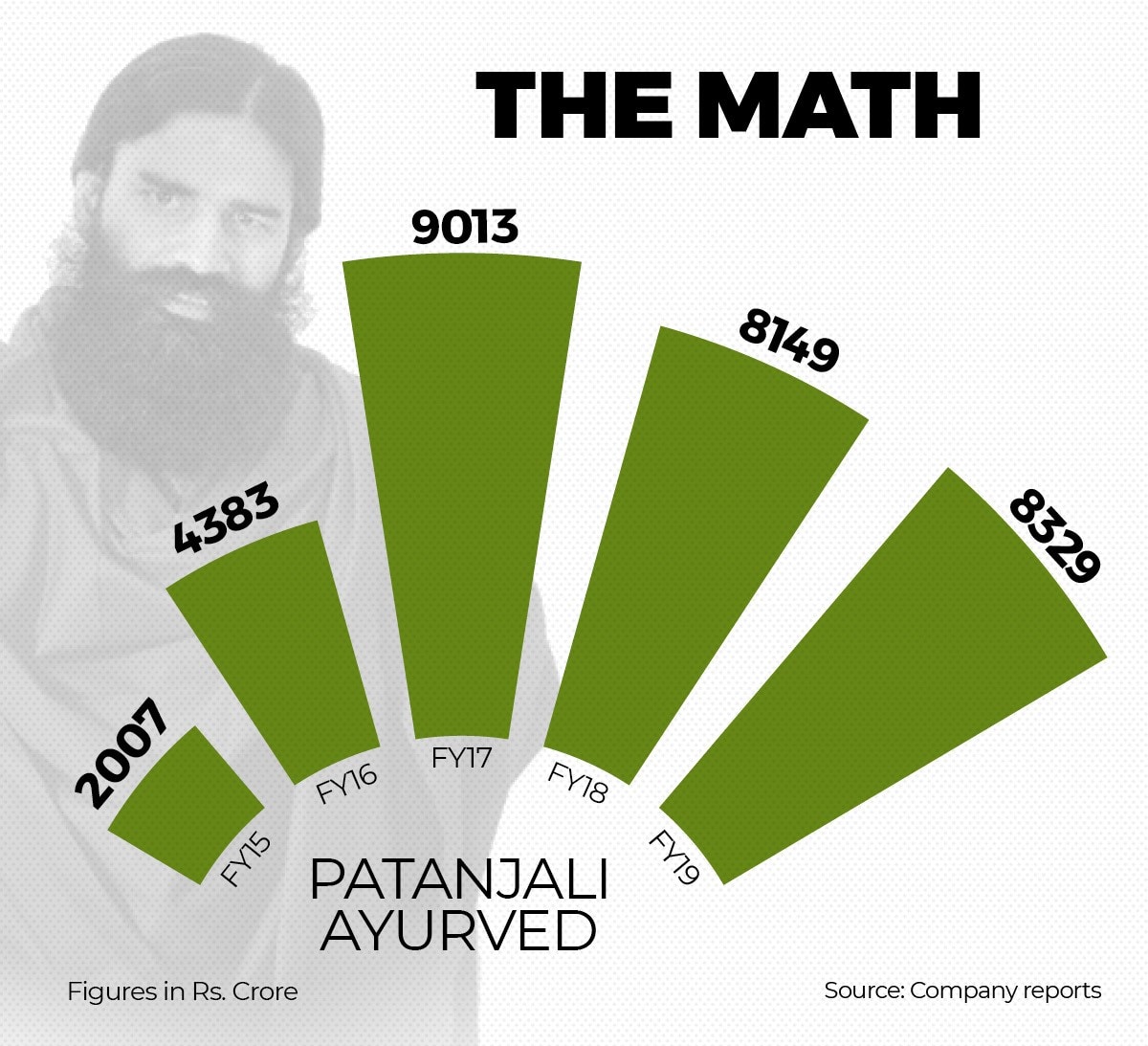 If Patanjali Ayurved is targeting revenues of Rs 10,000 crore at the end of FY20, it will need to clock about Rs 6,500 crore in the second half of FY20. Distributors that CNBC-TV18 spoke to to say that this may be difficult but not impossible.

Here is why. In Patanjali Ayurved’s product portfolio, the stock keeping units (used to track inventory) are heavily skewed towards winter products. That’s not all.

Right from ghee to mustard oil, creams and other personal care products, up to 60 percent of the company’s business comes from the second half of the year.

There is also a precedent. A similar revenue growth momentum was seen in FY19. Of the total Rs 8,329 crore, the company is said to have reported Rs 2,513 crore in the first half of FY19. This means it garnered revenues of Rs 5816 crore in the second half of FY19.
Tags Acharya Balkrishna Baba Ramdev Britannia Dabur FMCG HUL India FMCG market Patanjali Ayurved Patanjali FY20 revenues Patanjali revenues