Updated : May 15, 2018 01:12 PM IST
The company has managed to wash away all analyst expectations aside and report a stellar beat on all parameters this quarter.
Hindustan Unilever posted comparable domestic revenue growth of 16% in Q4, led by 11% underlying volume growth.

If you’re an ad-buff like me, chances are, you’ll remember the old Surf Excel Tagline – Dho Daala! I’ve decided to pull this out from the archives to describe its parent Hindustan Unilever’s (HUL) Q4 FY18 results.

The company has managed to wash away all analyst expectations aside and report a stellar beat on all parameters this quarter.

Across all the analyst-reports I referred to for consensus expectations, 6-8% was the general estimate. Volume growth of 11% in Q4 marks the company’s second straight quarter of double digit volume growth and this time, it’s without a favourable base.

Remember, Q3 FY18 saw 11% volume growth after five years and that too after Q3 FY17 witnessed 4% decline in domestic volumes owing to disruptions caused by demonetisation. It’s heartening to see that the company has posted double digit domestic volume growth without hampering margins.  In fact, a very strong operational performance will go down as the key highlight of HUL’s Q4 results.

Cost Savings have come by on account of the company’s strong focus on cutting down non-value adding expenses. Other expenses have remained under control, while there was also a 150 basis points improvement in gross margins.

However, the company’s focus on innovation and activation continues. For the second straight quarter advertisement expenditure increased in excess of 25%. The street would view this positively. Hindustan Unilever’s reported net profit in Q4 clocked in gains of 14.2%, but there was an exceptional loss of Rs 64 crore. If one was to adjust for the one-time expense, the FMCG major’s comparable profits grew 26% Y-o-Y, that’s comfortably above even the highest estimates made by the analysts.

So, what led to the growth?

HUL’s management says, there was broad based volume growth across all segments of the company. All verticals, home care, personal care, foods and refreshments witnessed double digit growth and margin expansion. The Natural’s portfolio and Innovative launches made by HUL grew 2.5 times the average growth at HUL. 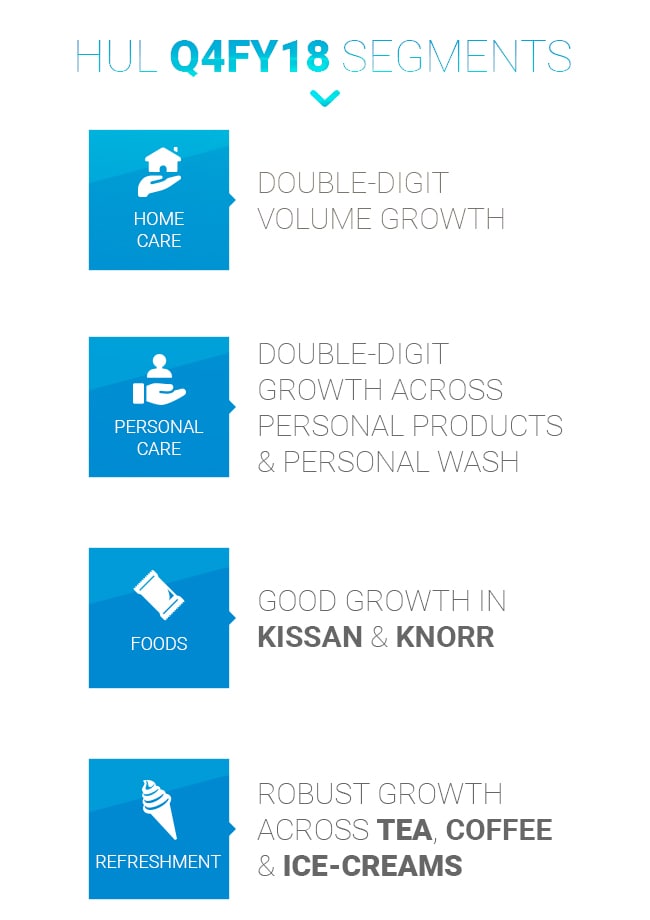 I was listening in to the company’s earnings call, wherein the top management sounded rather confident about resumption of normalcy in all trade channels, an improving demand environment and the company’s focus to succeed consistently and profitably despite increasing competitive pressure.

Management commentary was particularly positive on the company’s brands Ayush and Indulekha in the Naturals portfolio. While we kept hearing cautious calls from the top brass regarding an increasing input cost environment throughout the earnings call, the management sounded reasonably assured of their ability to tackle it, just as they have done so in the past. So, all said and done, the big question arises  — What Next?

Remember, Hindustan Unilever is trading at record high. The stock has added 80% to its humongous market cap in the last 18 months and it’s trading at a record high P/E multiple of nearly 49 times FY20e earnings.

Ahead of results, the consensus FY20e EPS (earnings per share) on the street was 31 against 24 in FY18.

It will be interesting to see if and to what extend to brokerages tweak these expectations upward given high base, increased input cost environment and record valuations.

Can there be a re-rating, will HUL cross ITC’s market cap tomorrow or will the fate of the HUL stock be similar to that of Titan, Dabur, Emami and Jubilant Foodworks, which saw profit booking despite good showing in the current quarterly results, only time will tell.

So let’s end it with a take on another Unilever tagline, results Achhe Hain! 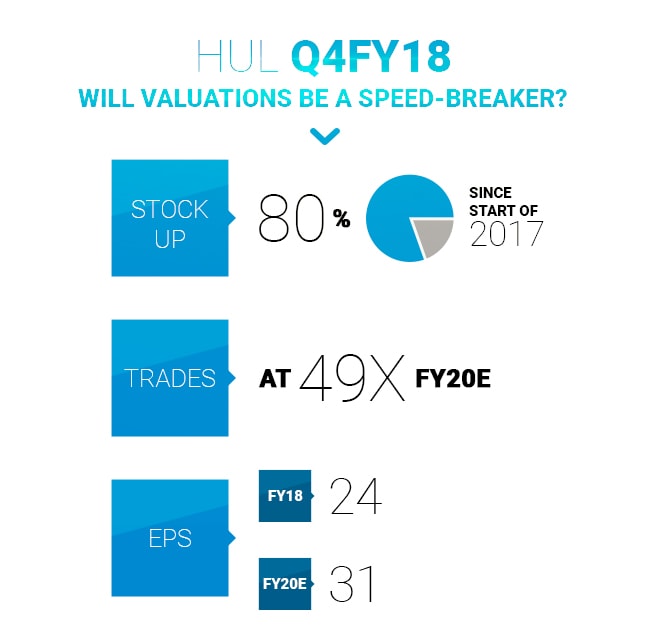