After double-digit growth in Q1, is HUL poised for further margin expansion?

Updated : July 18, 2018 11:16 AM IST
The company’s operational growth was led by improved gross margins, the money it directly makes per product before all the other expenses the company incurs.
HUL’s gross margins improved 200 bps to 54 percent led by product mix, judicious pricing and cost savings programme.

The fact that 12 percent volume growth, 200 basis points (bps) margin expansion and 24 percent growth in profits is considered “in-line with estimates” is eerily similar to saying Virat Kohli scoring a century while chasing a gargantuan score is “par for the course.”

Expectations and valuations are pinned on those who deliver and if the stock price is a barometer of the street’s expectations from HUL, the company has added Rs 2 lakh crore to its market capitalisation in the last 20 months to climb to record levels ahead of results. 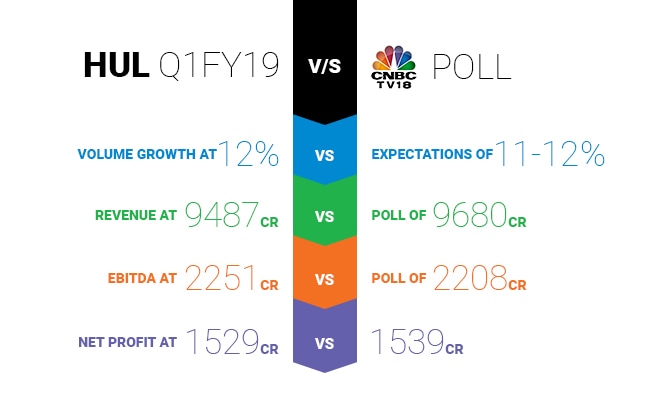 The company’s operational growth was led by improved gross margins, the money it directly makes per product before all the other expenses the company incurs.

Also, the expansion in gross margins trickled down to improvement in operational performance as the company's earnings before interest, tax, depreciation, and amortisation (EBITDA) margins expanded 190 bps to 23.7 percent as well.

This came despite the company spending higher money on advertisements to support innovations. Post 24 percent growth in the company's first-quarter earnings per share (EPS), the investors and analysts alike ask themselves and company, the most important question – Now What?

The company management sounded off some “pink flags” (red, I thought, is too strong a word) for the near future.

While the management expects the gradual recovery in demand to continue, they are concerned about the way input costs and currency is behaving.

In addition to increased input cost, the management also expects the competitive intensity to spike.

So the question that begets asking is, does Unilever has more levers for further margin expansion?

This is the third consecutive quarter in which the consumer giant has delivered double-digit volume growth.

While the demand environment has seen some improvement, one can’t ignore the role a favourable base has played towards the reported growth in underlying volumes.

Come the second half of FY19, and these double-digit volumes turn into an albatross around HUL’s neck. So to extrapolate these growth trends beyond the second quarter of FY19 may be an overstatement. All said and done, one can’t ignore the optimism in commentary from consumer companies on how they foresee demand.

Be it Unilever, Nestle, Marico, Dabur, Emami, Godrej Consumer, Britannia or even Jyothy Laboratories, all companies have stated and reiterated that there is strong underlying demand, despite disruptions such as demonetisation and Goods and Services Tax (GST).

A hat-trick of normal monsoons, state elections, higher minimum support prices, lead up to the 2019 general elections and the government’s thrust on improving farm incomes are just the right ingredients to spice this heady cocktail of consumer sentiment up.

The expected spurt in innovations, more launches in the naturals segment, normalising existing trade channels, higher spends on advertisement and promotions, and visibly increasing the presence of modern trade in our daily lives will only make it more difficult to not buy more FMCG products. 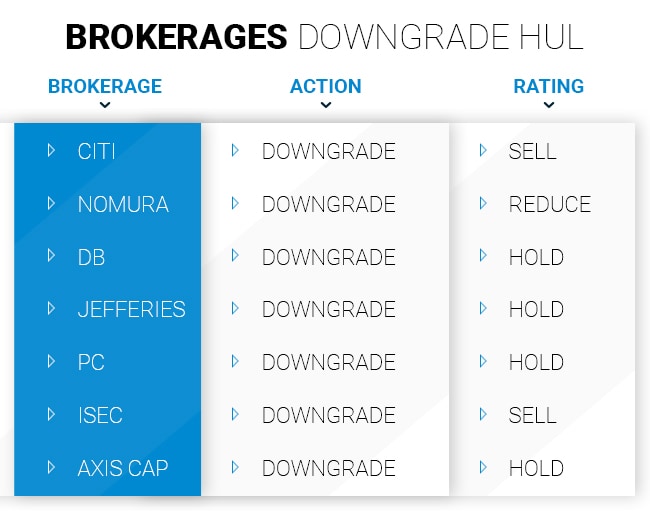 Strong sector tailwinds and companies delivering on expectations have kept the prices of all nearly FMCG companies close to record levels.

Given that company trades at 52 times FY20 earnings, analysts believe most positives are priced in and warrant a look at other companies that trade at a discount to HUL.

It’s not that analysts are finding fault with HUL’s first-quarter results or questioning the pedigree of the company. 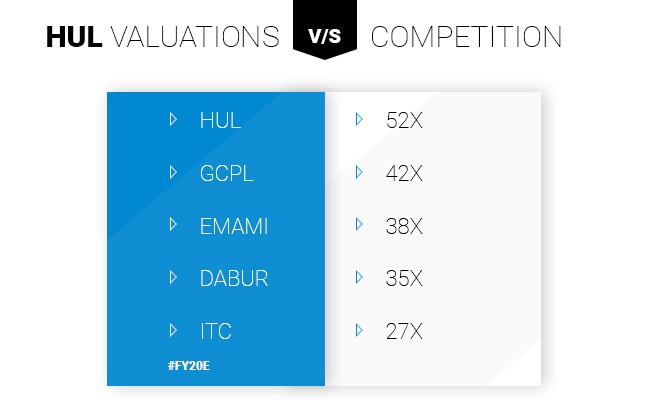