Housing sales in India's eight prime residential markets have shown a sequential growth of 12 percent during the January-March 2021 quarter helped by certain measures taken by the Centre as well as by several state governments.

According to a report by online property brokerage firm PropTiger.com, total home sales in these eight markets during Q1CY21 rose 12 percent to 66,176 units from 58,914 units in Q4CY20. However, when compared to the January-March period of 2020, home sales in the markets showed a decline of 5 percent. The January-March quarter of 2021 was marked with several state governments, including Maharashtra and Delhi, announcing stamp duty and circle rate reductions to boost buyer sentiment and by effect housing sales.

"This positive change is visible in the first quarter through an increase in supply numbers, an indication that developers are more comfortable now with regard to liquidity support and buyer sentiment. Metrics on the demand side have also been largely stable with the job market opening up again in various industries, giving people the confidence to take advantage of a property market that is at its most affordable for homebuyers in years," said DhruvAgarwala, Group CEO, Housing.com, Makaan.com and PropTiger.com. 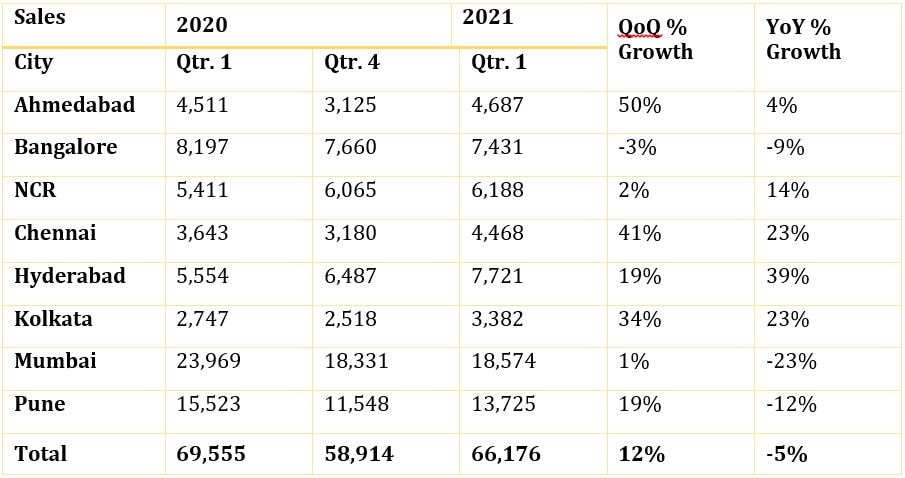 "Though the recent surge in COVID infections concentrated in a few markets is a concern, we expect the residential market recovery to continue," Agarwala added.

On the supply side, a total of 53,037 units were launched across India during the three-month period, which saw the Union Cabinet approving a Bill to set up a Rs 20,000-crore Development Finance Institution to offer long-term capital support for infrastructure development in India, the report said.

This marked an annual growth of 49 percent in the housing supply. A quarter-on-quarter (QoQ) comparison shows new launches declined 2 percent when compared to the last quarter of CY20.

Prices remained mostly stable except in Ahmedabad and Hyderabad

There was no upward movement in average prices of property in the primary or new homes market. While annual growth remained largely flat or in low single digits in most markets, Ahmedabad and Hyderabad stood out, with 5 percent annual growth in average rates of property, according to the report.

"The Maharashtra government's decision to temporarily lower stamp duty on property registrations helped mitigate the steep decline in sales for the Mumbai and Pune markets that contribute the most to the national stock of unsold homes," said Mani Rangarajan, Group COO, Housing.com, Makaan.com and Proptiger.com.

He believes that the state government should have continued with the benefit of reduced rates to keep the sales momentum going. He expected states like UP and Haryana to announce stamp duty and circle rate reductions in order to provide support to crucial housing markets of Noida and Gurugram in the national capital region.
Tags housing Housing sales Real Estate
Published : April 08, 2021 03:40 PM IST