According to data by PropEquity and JM Financial in the commercial year 2022 so far the absorption is at 447 million square feet (msf). Meanwhile in the corresplion in CY2019 to 503 billion in CY2022.

The year 2022 was definitely a good year for the real estate industry in India as the sector saw a sharp increase in demand in sales. The absorption in residential real estate was at a decadal high. However, further interest rate hike could threaten this rally going forward, say industry experts.

Residential real estate absorption is the amount of space or units occupied within a market over a given period of time which is usually a span of one year. 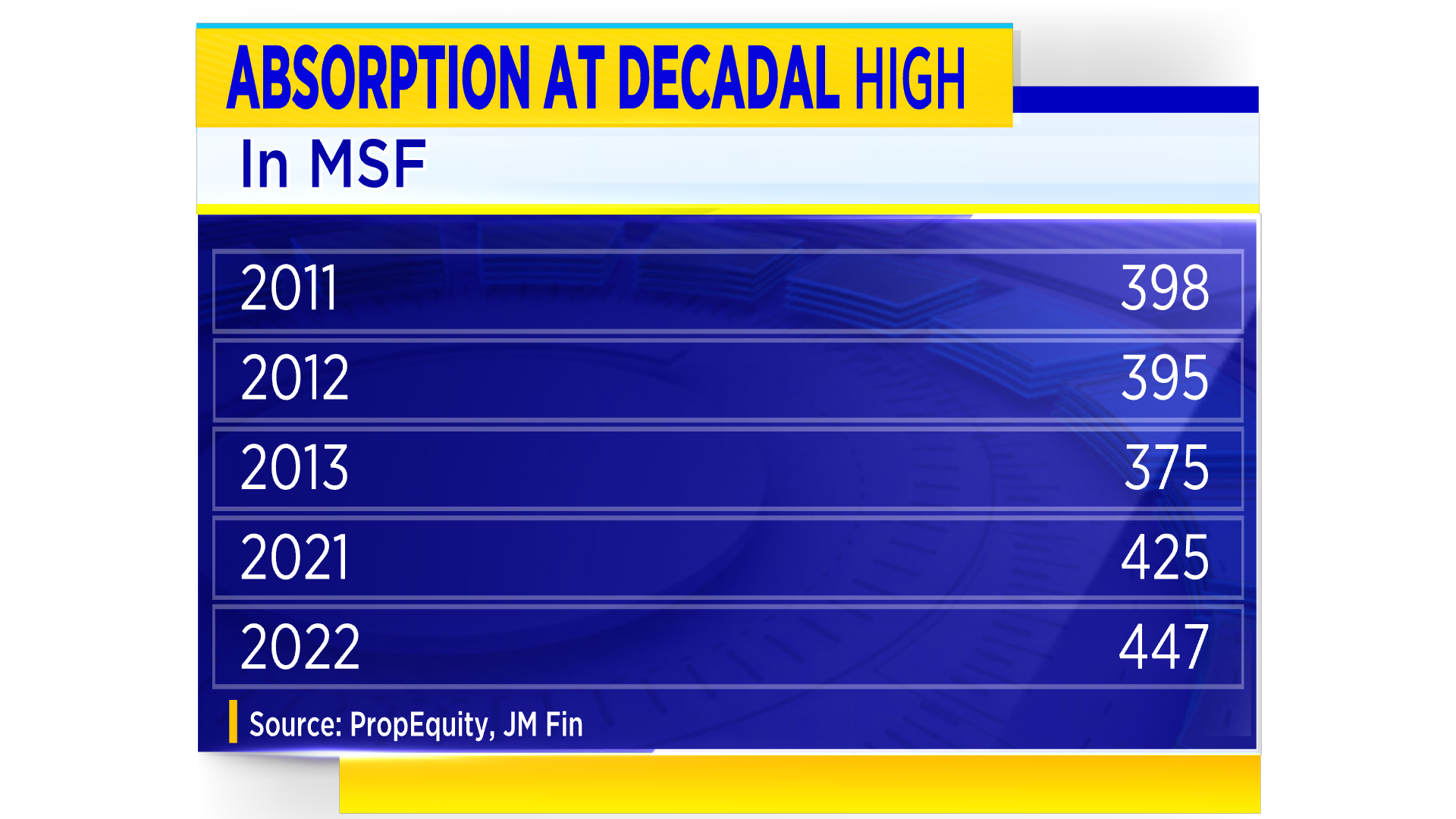 According to data by PropEquity and JM Financial in the commercial year 2022 so far the absorption was at 447 million square feet (msf). Meanwhile, the ready to move in inventory saw a substantial decline from the levels of 849 billion sq ft in 2019 to around 500 billion in 2022 (YTD). Even under construction inventory declined from across cities in India from calendar year 2019 to calendar year 2022. In CY19 there was a massive increase in inventories. In all the top cities, except Hyderabad, there has been a decline in under construction inventories from CY19 to CY22.
Also read: This Bengaluru based real estate developer eyes 35% revenue from Mumbai and Pune over 2-3 years Decline in inventories was accompanied by increase in prices. According to industry experts, passing on price hikes in the last quarter was not very difficult.
Also read: mMahindra Lifespaces Q2 bookings better than expected: CEO Arvind Subramanian
Data suggests that price hikes in the July-September quarter in some geographies have been massive. According to a recent report by CREDAI, Colliers, and Liases Foras, housing prices in Ahmedabad have risen by an average of 14 percent in the last two years. The prices were up 11 percent on a yearly basis in the third quarter of the year. This is across the industry including organized and unorganized players. Godrej Properties and DLF saw over 60 percent growth in bookings, Oberoi Realty saw a rise of 92 percent. Sobha, Kolte-Patil Developers, Brigade Enterprises and Sunteck Realty saw their growth in the range of 20-50 percent.
The risks to this massive rally be
One of the potential challenges that the rally could see will be further rising interest rates. RBI has hiked rates to 6.25 percent in last few policy meetings.
According to Delhi-based builder DLF, the demand for real estate was impacted when mortgage rates were at 9 percent.
The management from Prestige Group also told CNBC-TV18 that if mortgage rates cross 9 percent it will certainly impact real estate demand. So rate action from the RBI will be key to watch.
One good thing although is the Blackstone and Starwood funds' limited withdrawal from their real estate funds earlier in December and this was due to the surge of redemption requests.
Big and small investors were queuing up to pull money out of real-estate funds, which is a sign that the surge in interest rates is threatening to impact at least the commercial-property sector. But whether it starts to have an impact on the entire sector will be worth to look out for.
Meanwhile Keki Mistry, VC & CEO, HDFC told CNBC-TV18 that the structural demand for housing in India will always remain strong in a long term aspect.
"One reason is that it is very under penetrated, market mortgages in India, just about 11 percent of GDP, which is amongst the lowest in the world. Affordability has improved a lot over time because prices have not moved up in line with to be in conceptual gap. So all in all, the outlook for the sector remains bright,"
He further added that as the government has been very focused on the sector by providing fiscal incentives, the credit linked subsidy scheme this has resulted in a boom for the sector making the outlook very strong for the future.
Also read: Foreign investors pivot towards Indian stocks for year-end shopping, real estate leads inflows
(Edited by : CH Unnikrishnan)
Check out our in-depth Market Coverage, Business News & get real-time Stock Market Updates on CNBC-TV18. Also, Watch our channels CNBC-TV18, CNBC Awaaz and CNBC Bajar Live on-the-go!
Tags