Is real estate sector in India finally on a recovery path?

Updated : November 29, 2018 05:04 PM IST
NBFC market share in developer financing has increased from 24% at FY14 end to 53% as of March 2018.
The impact of funding crunch is expected to strengthen the positioning of big realty players.

After some quarters of lull, the real estate sector seems to be turning a new leaf, and is on a regulated recovery path. The second quarter sales were positive for the majority of the listed players and the commentary from the big realty players in terms of demand showed some respite. 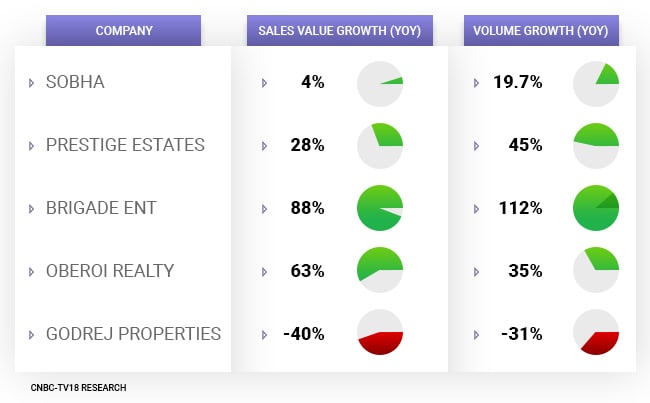 Residential property demand in key cities have showed some signs of bottoming out and commercial property witnessed a steady demand. Also, inventory levels are at eight quarter low.

However, non-banking financial companies (NBFCs) liquidity crunch is plaguing the real estate sector. The NBFC market share in developer financing has increased from 24 percent at FY14 end to 53 percent as of March 2018.

Post-Real Estate Regulatory Authority (RERA), the ability of developers to extract equity from new sales have declined. With banks and housing finance companies (HFCs) not allowed to lend for land purchases, the new supply was largely funded via, a mix of NBFC loans, private equity etc.

Despite the unstable operating environment, funding reported a 14 percent compound annual growth rate (CAGR) (Banks + NBFCs) during FY14-18. Funding of banks to developers posted a 4.7 percent CAGR during the same period and NBFCs reported a 45.3 percent CAGR. But when it comes to raising funds through private equity deals and real estate investment trusts (REIT), less traction was witnessed currently. 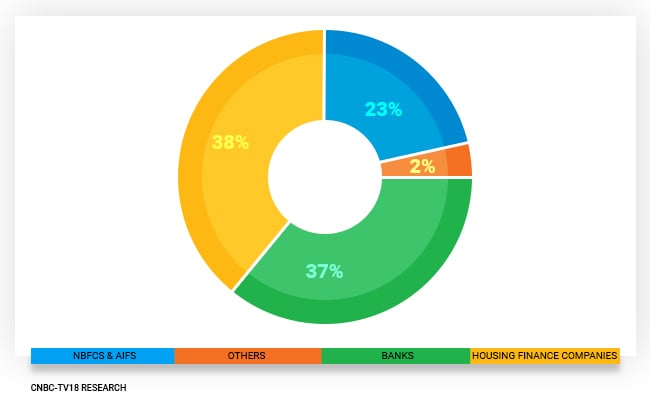 The impact of funding crunch is expected to strengthen the positioning of big realty players as some mid-size players had defaulted on loans. As a matter of fact, market share for big realty players have increased to 75 percent against 30 percent with regard to new launches in the last few years. This may push for more consolidation in the real estate sector with big realty players having more avenue for funding their projects.

Discussions with various experts, companies and analysts by CNBC-TV18 suggested that NBFCs have taken a step back in loan disbursals and had impacted the cost of funding for the real estate sector, minus big players.

As organised players have relative liquid balance sheet and healthy sales momentum, they can hold their companies for long run. With over 89 percent of inventory under-construction, big realty players are less vulnerable to pricing pressures.

Discussions suggest that liquidity tightness for certain housing financing companies have led to instances of delay in disbursal of home loan installments. The global investment firm, CLSA, said for 85-90 percent of the market, availability of mortgages should not be a problem with banks and ‘AAA’ rated HFCs are well positioned to gain share.

Real estate data and analytics firm, PropEquity, said completed properties and under construction properties managed by big developers (as they are offering subvention schemes) are not facing financing issues, but the under construction segment managed by small developers will face serious funding issues as the inventory is not getting liquidated easily. Additionally, price cuts cannot be taken on new sales due to fear of cancellations.

While price cuts could be a measure, it’s still a measure of last resort as this increased the chances of investors cancelling the bookings and does not necessarily lead to a demand pick up and can lead to further price decline. Also, this can impact the cover available for financial institutions.

Interactions with real estate companies also suggested that this is an opportunity to buy stressed assets in the real estate and can lead to further business development. Also, experts expect consolidation over time for the sector after some near term challenges.
Tags CLSA HFC NBFC PropEquity REIT RERA