Updated : April 27, 2021 05:43:04 IST
Commercial office assets dominated deals with $864 million transacted, translating into 94 percent of the total value in the first quarter of CY21.
Among cities, Hyderabad witnessed the highest capital flows of $384 million, accounting for a 42 percent share of investments during the first quarter of 2021.

Institutional investments in the Indian real estate sector during the January-March 2021 registered a growth of 20.8 percent YoY to $922 million, indicating sustained investor interest in the country's real estate market.

According to JLL’s Capital Markets Update Q1 2021, investments during the quarter were driven by more activity from funds and closed development stage deals and were further supported by external macroeconomic factors.

However, the pandemic surge during the second half of March 2021 is expected to delay the investment pipeline in the second quarter, says JLL.

The investments during the March quarter were much lower than those received in the previous quarter. "The remarkable resilience of the office market and confidence in its long-term growth led investors to chase quality assets available at the core and development stages. We also see the maturing listed REIT market providing an alternative to other asset classes, which lacked income stability," said Samantak Das, chief economist and head of research & REIS (India), JLL.

Commercial office assets dominated deals with $864 million transacted, translating into 94 percent of the total value in the first quarter of CY21.

Office space developers liquidated their portfolios to deleverage or raise growth capital for the next phase of expansion. In addition, investors are actively scouting for warehousing assets at present and deals are likely to be concluded in the coming quarters, the JLL report said.

The housing sector, meanwhile, continues to experience an infusion of last-mile funding for project completion. 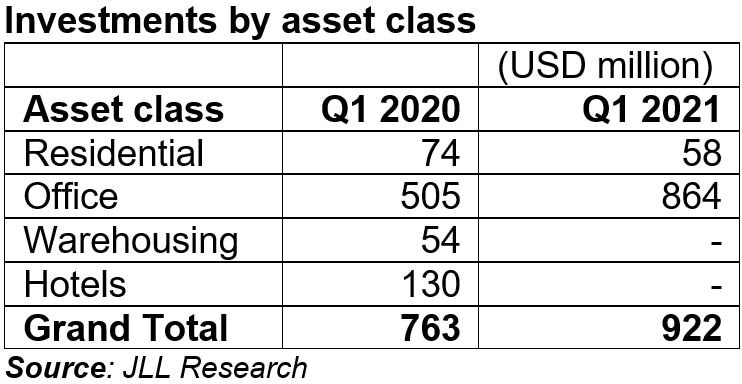 Among cities, Hyderabad witnessed the highest capital flows of $384 million, accounting for a 42 percent share of investments during the first quarter of 2021, due to the launch of new developments by the Phoenix Group.

Mumbai accounted for a 21 percent share of investments with $193 million deployed in its office and residential segments, supported by the reduction in stamp duty introduced by Maharashtra. Meanwhile, the debut of three listed REITs further positioned India on the radar of institutional investors, the report said.

The Brookfield India REIT issue of $521 million was successfully launched in February 2021 and was eight times oversubscribed, with domestic mutual funds being major anchor investors.

JLL believes that the listing of more REITs will gather pace in 2021, also influencing the investment momentum.

Going ahead, though resurgence in the number of new COVID cases has caught the nation off guard, a swift response to the pandemic and lessons from the past are expected to guide current actions.

The residential sales in Q1 2021 recovered to more than 90 percent of the volumes witnessed in Q1 2020 (pre-Covid) across the top 7 cities. Smart recovery in demand in 2021 is expected to improve investment prospects.

JLL expects a recovery in the housing sector to attract funds, especially for projects in the last stages of completion. Opportunities for construction finance and last-mile funding would be available, it said.

Further, the entry of new data centre operators and expansion plans of major players supported by infrastructure and PE funds are expected to drive deals. Platform deals in the logistics sector are likely to remain active as the segment benefitted from growing e-commerce demand as well as pandemic induced demand for cold storage facilities from the pharma sector, it added.
Tags investment Real Estate REIT
Published : April 27, 2021 05:43 PM IST