Mohit Malhotra, MD of Godrej Properties, in an interview with CNBC-TV18, said that the pricing power has come back with most real estate companies taking a 5 percent hike.

Godrej Properties on Tuesday said that the recent interest rate hikes have not impacted the real estate sector and that the overall demand remained positive with prices rising.
"I think it's a cyclical turn, which has happened in the residential sector. We are in upturn. The markets are now coming back. So I think overall demand remains quite positive and I think from here on, we remain quite optimistic," said Mohit Malhotra, MD of Godrej Properties, in an interview with CNBC-TV18.
According to Malhotra, the pricing power has come back with most companies taking hikes by 5 percent.
"A very high increase in volume coupled with a bit of price hikes gives us confidence that cycle has truly turned. And you can see that the sales of the top 10 developers have significantly grown over the last few years," he said. 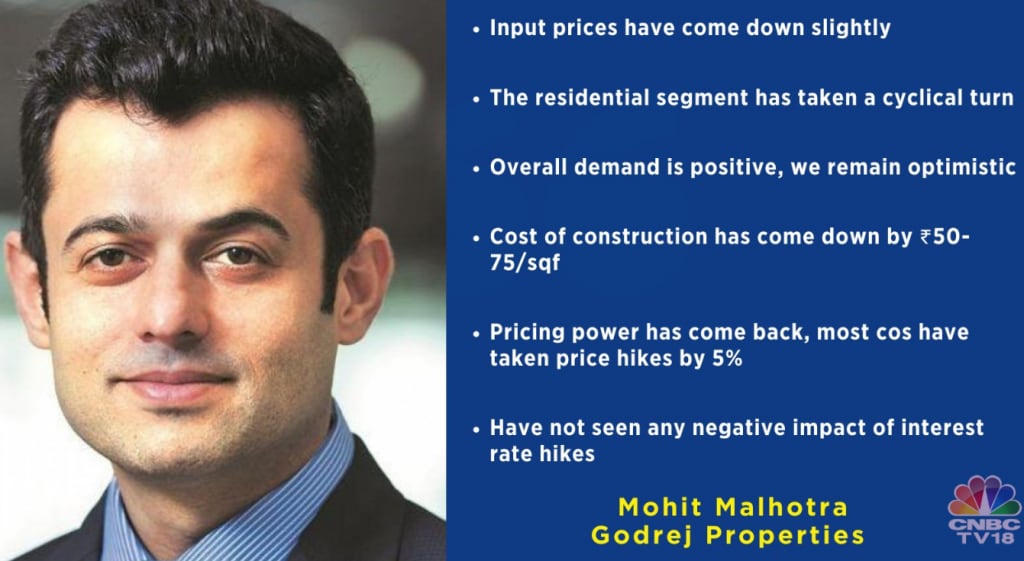 Malhotra said that the input prices have come down slightly with the overall cost of construction reducing by up to Rs 75 per square foot.
"Overall, I would say that given these recent measures, the cost of construction has come down by almost Rs 50 to 75 per square foot, which is a good number. But again, we have to see it in context of the rise, which has happened in a year where the prices had actually gone up by almost 15 percent," explained Malhotra.
In an unscheduled monetary policy announcement earlier this month, the Reserve Bank of India hiked the repo rate — the rate at which it lends funds to commercial banks — by 40 basis points (bps) to 4.4 percent. The decision came amid rising concerns over inflation that hit a multi-year high recently.
An increase in repo rate means a hike in lending rates by commercial banks, particularly home loan interest rates, which in turn implies that borrowers' EMIs would go up.
"There is a strong correlation between interest rates and real estate demand. The good news is that we are at a historical low in terms of both the repo rates and also the mortgage rates. While they have slightly gone up in the last few months, but still remain at historical lows. So as of now, we haven't seen any major demand impact from these interest rate hikes," said Malhotra.
As the inflation remains high, experts and economists are expecting the RBI to tighten monetary policy aggressively. Many are of the view that the central bank needs to the hike key rate by at least 100 basis points to control rising inflation.
According to Malhotra, any "sharp changes" from here could "obviously have an impact on the overall market and real estate as well".
Check out our in-depth Market Coverage, Business News & get real-time Stock Market Updates on CNBC-TV18. Also, Watch our channels CNBC-TV18, CNBC Awaaz and CNBC Bajar Live on-the-go!
Tags