The coronavirus-induced nationwide lockdown imposed from the last week of March severely impacted the real estate sector, resulting in muted launches and a decline in sales.

The real estate sector sold 57,940 units during the January-June period of 2020, a report by ANAROCK Property Consultants said. Sales decreased by 49 percent in H1CY2020 compared to H2CY2019 as every city underwent contraction. The contraction was in the range of 46 percent to 51 percent across the top 7 cities of India.

The sales, however, continued to exceed launches during the Jan-June period.

Sales in the April-June period of  2020 accounted only for 22 percent of H1CY2020, which primarily led to an overall decline in half-yearly sales. Sales during April-June quarter were 72 percent lower than the Jan-Mar quarter and nearly 81 percent down from the same period last year. The real estate sector witnessed the lowest supply of new launches in the last five years. New launches in H1CY2020 declined by 56 percent as compared to H2CY2019.

“The April-June period of 2020 was the most impacted quarter with launches being the lowest since 2013. During this quarter, new launch supply declined by 97 percent over Q1CY2020 and 98 percent over the same period last year,” the report said.

It is to be noted that the share of affordable housing in new launches during Jan-March 2020 was around 36 percent of the total supply. This decreased from 41 percent in H2 2019. In absolute terms, the half-yearly decline in this segment was around 61 pecrent.

Moreover, no new supply was added in the affordable segment during April-June 2020 period.

“Affordable housing segment continued to be one of the largest contributors, although its share declined from 41 percent in H2 2019 to 36 percent in H1 2020. All the cities witnessed a reduction in supply in H1 2020. The nationwide lockdown imposed since March 2020 severely impacted new launch activity in Q2 2020,” the report said. 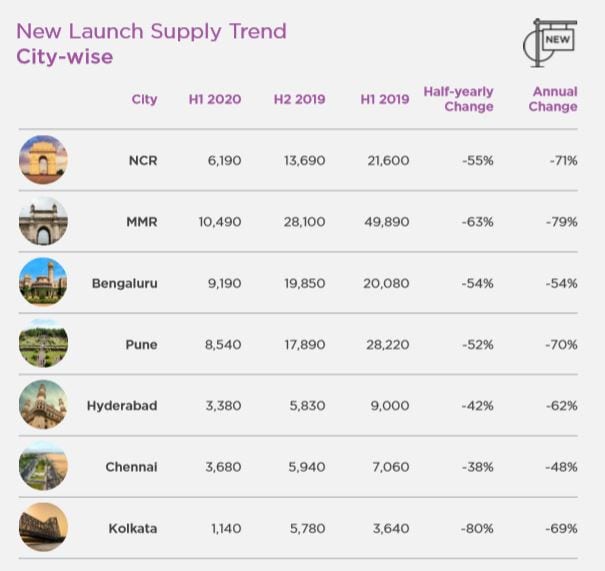 Moreover, prices remained range-bound in all cities during H1 2020 while inventory overhang increased from 30 to 44 months in the last 6 months. 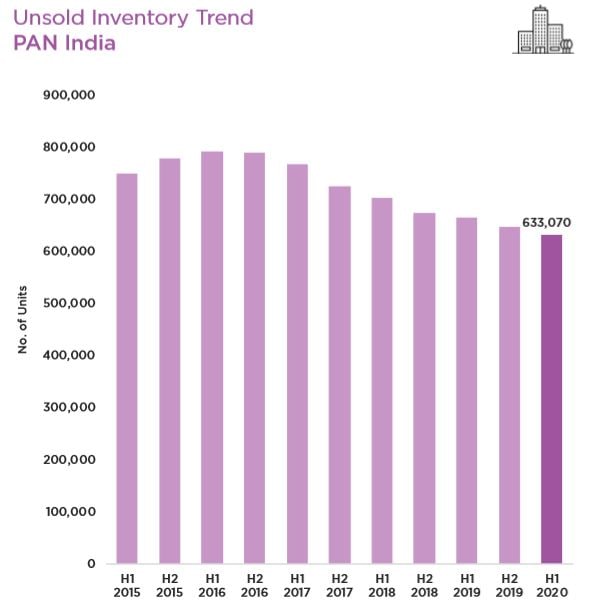