US President Donald Trump faces impeachment inquiry: Here is how the procedure works

Updated : September 25, 2019 04:56 PM IST
No US president has ever been removed from office by impeachment.
Andrew Johnson and Bill Clinton, have faced impeachment process and one another, Richard Nixon, resigned before he could be.
Bill Clinton came under scrutiny after allegations that he had lied about his affair with Monica Lewinsky during a sworn deposition.

The US House of Representatives will launch a formal impeachment inquiry against President Donald Trump after he admitted that he had pressured Ukrainian president Volodymyr Zelenskiy in a July 25 phone call to investigate Democratic presidential front-runner Joe Biden and his son Hunter, who had worked for a company drilling for gas in Ukraine.

House Speaker Nancy Pelosi announced the impeachment inquiry on Tuesday after a closed-door meeting with Democratic lawmakers, saying Trump's actions appeared to have undermined national security and violated the US Constitution. 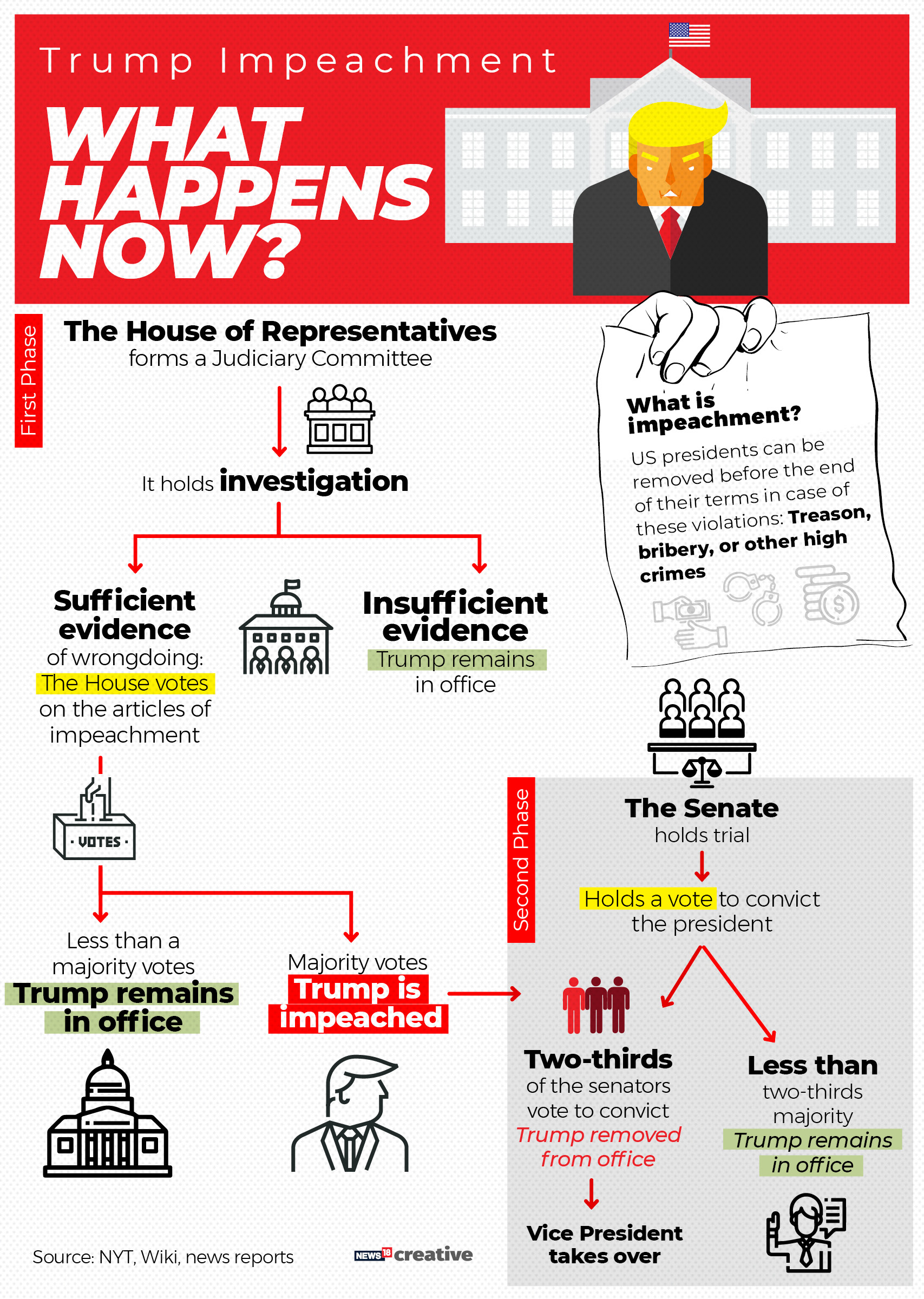 "The president must be held accountable. No one is above the law," said Pelosi. But President Trump fired back quickly on Twitter, calling the inquiry "Witch Hunt garbage."

Impeachment is largely a matter of political will. While Democrats control the House, any bid to impeach Trump needs the bipartisan support of the Republican Party in the Senate where they are in majority.

Here is an explainer on the US impeachment process and related facts:

The US Constitution provides for the removal of president, vice-president and other civil officers and judges from office.

Article 2 of the constitution states that a person can be impeached for “treason, bribery, or other high crimes and misdemeanours”.

Article 1 gives the House the power to bring impeachment proceedings and empowers the Senate to adjudicate the case.

How does it work?

Any member of the House of Representatives may bring a resolution of impeachment. The House judiciary committee decides whether to move the resolution to a vote in the full House.

If a simple majority of the House votes to approve the resolution, the target of the motion is officially impeached and the matter moves to the Senate for a trial.

The House selects representatives to act as prosecutors in the trial before the Senate, which acts as the jury. A two-thirds vote of the Senate is required to convict.

If the president is convicted, he is removed from office and disqualified from holding “any office of honour, trust or profit under the United States.”

The decision of the Senate cannot be appealed.

Although no other punishment results from impeachment, there are provisions for bringing a separate indictment for state or federal crimes.

What history tells us about impeachment proceedings?

For starters, no US president has ever been removed from office by impeachment. Two, Andrew Johnson and Bill Clinton, have faced impeachment process and one another, Richard Nixon, resigned before he could be.

Andrew Johnson, 1868: Johnson ignored a Congressional act requiring him to seek Senate approval to oust secretary of war Edint Stanton and fired him. The latter disagreed with the President’s approach to the south after the civil war. The House overwhelmingly approved the resolution by a vote of 126 to 47 but the Senate voted against conviction by a single vote. Johnson was acquitted and remained in office.

Richard Nixon: The Republican president was under scrutiny after a Senate committee began to investigate the break-in at the Democratic Party’s offices at the Watergate Hotel. After he ordered the firing of the first Watergate special prosecutor, the House Judiciary Committee began inquiry and approved three articles of impeachment, abuse of power and contempt of Congress. The president resigned soon after.

Bill Clinton: The Democrat president came under scrutiny after allegations that he had lied about his affair with Monica Lewinsky during a sworn deposition. The House voted 228-206 to impeach Clinton for perjury, and 221-212 for obstruction of justice in 1998. But the six-week trial didn’t yield results as the Senate voted against conviction on both counts and Clinton was acquitted and served the office.
Tags Andrew Johnson Bill Clinton DOnald Trump Donald Trump news House of Representatives Monica Lewinsky Richard Nixon senate Trump impeachment Trump impeachment news US politics