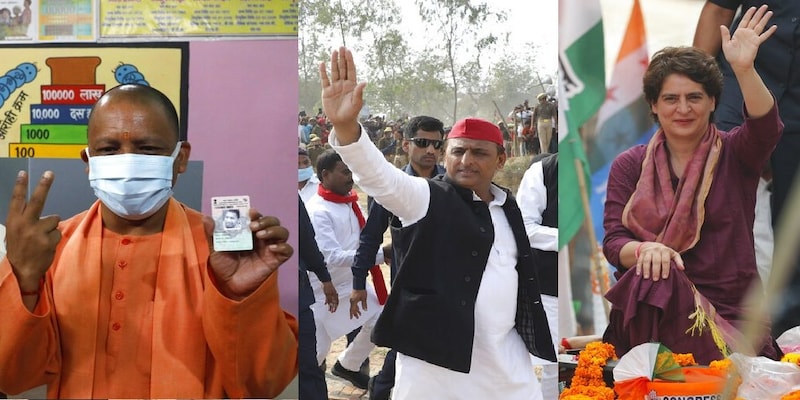 Poll of Polls predicted 238-258 seats for Yogi Adityanath-led BJP+ in UP, 128-148 seats for Akhilesh Yadav-led SP+, the main challenger to BJP in UP, 8-16 seats to Mayawati-led BSP, and 3-7 seats to the Congress, led by Priyanka Gandhi Vadra.

Bharatiya Janata Party (BJP) seems to have cleared the test in Uttar Pradesh Assembly Election 2022 as exit polls have predicted the party to retain the country’s most populous state. The Uttar Pradesh assembly has 403 seats and a party or coalition will need to win 202 seats for a majority. Assembly Election results will be out on March 10.

Poll of Polls predicted 238-258 seats for Yogi Adityanath-led BJP in UP, 128-148 seats for Akhilesh Yadav-led Samajwadi Party (SP), the main challenger to BJP in UP, 8-16 seats to Mayawati-led Bahujan Samaj Party (BSP), and 3-7 seats to the Congress, led by Priyanka Gandhi Vadra. SP is fighting UP Assembly Elections 2022 in alliance with Jayant Chaudhary-led Rashtriya Lok Dal (RLD). BJP is also fighting UP in alliance with two other parties.
Matrize-Poll results predicted BJP+ to bag between 262 and 277 seats, while SP+ is set to bag between 119 and 134 seats, as per Matrize-Poll results. BSP may be reduced to 15 seats, while Congress may bag between three and eight seats, according to Matrize-Poll results.
Also Read: Punjab Exit Polls: AAP to win by landslide, Congress a distant second; BJP-led alliance to get fewest seats
P-MARQ exit poll survey gave 240 seats to BJP+ in UP. It said SP+ might get 140 seats, the BSP may bag 17 seats, while the Congress could be reduced to just four seats. P-MARQ exit poll survey also predicted others and independents may get two seats.
Axis My India predicted 288-326 seats for BJP+, 71-101 for SP+, 3-9 for BSP, 1-3 for Congress, and 2-3 for others. Pollstrat exit poll survey gave 211-225 seats to BJP+, 116-160 seats to SP+, 14-24 seats to BSP, 4-6 seats to Congress. ETG Research gave 230-245 seats to BJP+ in UP, 150-165 seats to SP+, 5-10 seats to BSP, 2-6 seats to Congress, and 2-6 seats for all others. Jan Ki Baat predicted 222-260 seats for BJP+, 135-165 seats for SP+, 4-9 seats for BSP, 1-3 seats for Congress, and 3-4 seats for others.
Also Read: Uttarakhand Exit Polls: Neck and neck fight between BJP and Congress
Reacting to exit poll results, Uttar Pradesh Chief Minister Yogi Adityanath said: “I thank all the BJP workers. Elections were conducted peacefully in UP. I thank the Election Commission for conducting free and fair elections.”
Dismissing pre-poll surveys that showed that the BJP had the edge in Uttar Pradesh elections, Yadav on Monday said the ruling party will be wiped out from the state when the results are declared on March 10. "Let them show whatever they have got. We are winning with a majority," he said.
Months after demonetisation in 2017, most UP exit polls had predicted a hung assembly but also stated BJP would emerge as the largest party. Barring the India Today-Axis survey (251 to 279) and Today's Chanakya (285), all the other exit polls had reported that the BJP would win 160-180 seats. In 2017, most exit polls had also predicted the SP-Congress alliance to bag 80-160 seats.
Also Read: Goa Exit Polls: Congress gets slight edge, may win 16 seats, BJP 14, AAP just 4; TMC fails to make inroads
But the pollsters got it wrong. When the final tally emerged, the SP-Congress alliance had managed to bag only 54 of the seats (47 for SP and only seven for Congress).
The BJP surprised them all and came out on top with a thumping 312 seats. BJP’s count settled at 325 along with their allies (the Apna Dal (Sonelal) and Suheldev BSP won nine and four seats, respectively).
The accuracy of exit polls has been a subject of debate over the years. Experts state that they aren't accurate and only provide a broad trend and a sense of direction as to the mood of the nation.
Also Read: Manipur exit polls 2022: BJP likely to be single largest party, predict pollsters
Voting in UP happened in seven phases, starting on February 10, with the last happening on March 7. Prime Minister Narendra Modi's parliamentary constituency Varanasi also voted on March 7 to decide the fate of 613 candidates. SP+ was the main opponent for BJP in UP this time. Though exit polls have predicted a landslide for BJP, they also show BJP has lost some favour while SP+ gaining a lot.
BJP is fighting UP in alliance with Apna Dal (Sonelal) and NISHAD Party (on BJP symbol). The National Democratic Alliance signed a seat-sharing pact with the NISHAD Party getting 16 and Apna Dal getting 17 and the BJP competing on the rest of the 370 seats. Apart from RLD (33 seats), SP is fighting for UP in alliance with Suheldev Bharatiya Samaj Party (17 seats) and other smaller regional parties (10 seats). Two alliances of smaller parties — the Bhagidari Parivartan Morcha and the United Democratic Alliances — also participated in the UP Assembly Elections 2022.
Click here to catch LIVE news updates on Exit Polls 2022.
Check out our in-depth Market Coverage, Business News & get real-time Stock Market Updates on CNBC-TV18. Also, Watch our channels CNBC-TV18, CNBC Awaaz and CNBC Bajar Live on-the-go!