The US-India defence ties are closer than ever. What is the path ahead?

Updated : May 01, 2019 04:20 PM IST
Both countries have made notable progress on articulating shared values and interests, signing new defense agreements that deepen interoperability, and participating in joint exercises.
However, there is still scope for both countries to do more and deepen defense cooperation further.
The next government should move quickly to build upon the progress made over the past five years and ensure that US-India defense ties remain closer than ever.

As Prime Minister Modi took office in 2014, US-India ties were still reeling from growing animosity between both countries. Trade-related issues, the arrest of an Indian diplomat in New York, India’s passage of a weak nuclear liability law, and American defense contractors losing out on India's multi-role aircraft tender process had placed ties in a trough. However, today, US-India defense ties have not only recovered from the period of frustration and dissatisfaction of 2013, but have become, as Defense Minister Nirmala Sitharaman stated, "the key driver of the bilateral relationship." Defense ties between both countries are now closer than ever due to progress on two key aspects: crucial defense-related agreements and joint exercises. 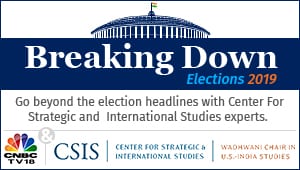 Since 2014, the United States and India have signed several agreements that underscored the growing alignment on shared strategic interests. These included two kinds of agreements. The first were broad statements articulating the shared values, principles, and interests of both countries. The second type of agreements, called "foundational" or "enabling" agreements, advanced operational causes by promoting interoperability between the US and Indian militaries. Below is a list of the major agreements signed between the United States and India since 2014: Together, these agreements established the foundation for deeper collaboration on security and strategic issues. For example, as both countries engage deeper on common areas of interest in the Indo-Pacific, the LEMOA would allow the United States to build a greater presence in the Indian Ocean and conduct more joint exercises there, building up India’s own capabilities in the region. Similarly, the COMCASA makes it easier for military leaders in both countries to communicate securely, which is crucial in times of crisis.

However, there is still more on the agenda for both countries. A third foundational agreement, the Basic Exchange and Cooperation Agreement (BECA) allowing the exchange of geospatial data, remains to be signed. Moreover, at the conclusion of the first U.S.-India Ministerial 2+2, both countries committed to signing an Industrial Security Annex, allowing the private sector in both countries to cooperate and collaborate more deeply. The next government should pick up the mantle and build on the progress of previous agreements to see these to their conclusion.

Joint Exercises – Past, Present, and Future

In addition to the agreements signed by both countries, the United States and India have also taken steps to deepen defense cooperation through a series of bilateral and multilateral exercises. As India’s Chief of Air Staff, Air Chief Marshall BS Dhanoa, said, these exercises “create an environment of camaraderie and an opportunity to learn from each other’s best practices in enhancing operational synergy.” Joint exercises, therefore, not only improve India’s own capabilities, but also represent a physical manifestation of the joint values and interests that both countries espouse in the agreements they sign. Below is a list of the major exercises in which the Indian military exercises alongside the United States: 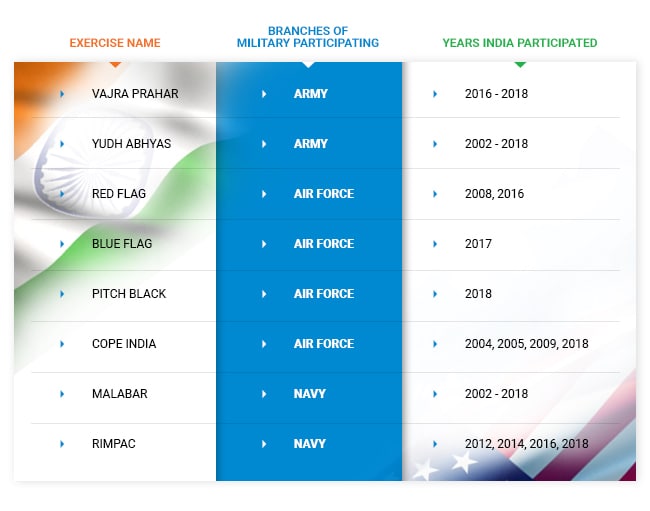 The United States has become India’s biggest partner for exercises. Both countries have already begun building upon this cooperation, announcing that they will launch a new bilateral tri-services exercise. However, opportunities exist to expand the scope of this cooperation, including one that has been raised by my colleague, Richard Rossow, and Amb. Hemant Krishan Singh. They argue that the United States and India should to expand the Malabar naval exercise into a “two-phase exercise,” with “the first involving INDO-PACOM in the eastern Indian Ocean, and the second engaging CENTCOM in the western Indian Ocean.” The next government should heed this idea and look to the western Indian Ocean as the next theatre in which to engage the United States on joint exercises.

Since Prime Minister Modi took office five year ago, US-India defense ties have steadily deepened. Both countries have made notable progress on articulating shared values and interests, signing new defense agreements that deepen interoperability, and participating in joint exercises. However, there is still scope for both countries to do more and deepen defense cooperation further. The next government should move quickly to build upon the progress made over the past five years and ensure that US-India defense ties remain closer than ever.

Aman Thakker is a Research Associate with the Wadhwani Chair in US-India Policy Studies at CSIS.