PM Modi visits his mother in Gandhinagar, seeks her blessings

Updated : May 26, 2019 10:14 PM IST
PM Modi met his mother Hiraben at her residence in Gandhinagar to seek her blessings.
Addressing a rally in Ahmedabad, Modi said that over the next five years, the government will focus on regaining India's lost position in the world.

Here are the highlights of the day:

9:10 pm - Modi seeks his mother's blessings at her residence in Gandhinagar

Prime Minister Narendra Modi meets his mother Heeraben Modi at her residence in Gandhinagar and seeks her blessings. #Gujarat pic.twitter.com/qWEwnJo1Y9

8:50 pm - Modi arrives at his mother's residence in Gandhinagar

PM Modi on Sunday evening arrived at his mother Hiraben's residence in Gandhinagar, Gujarat, to seek her blessings after a massive victory in Lok Sabha elections 2019. In 2014 too, the PM had visited his mother immediately after the poll results were announced, giving the BJP an absolute majority.

"This election many pundits failed, after the 6th phase of polling, I had said that we will get 300 plus seats. Many people made fun of me. During the whole election, it was noticed that people were voting to make the govt strong," Modi said in Ahmedabad.

7:30 pm - I dedicate my visit to the victims of Surat tragedy and their families: PM Modi in Ahmedabad

Addressing a rally in Gujarat's Ahmedabad, Modi, who is set to take oath as Prime Minister on Thursday, said that he was dedicating his visit to the victims of the Surat tragedy and their families.

"The Surat tragedy is heartbreaking... we cannot express our condolences in words," said Modi, adding that the government is determined to ensure that such incidents are not repeated.

"Even though I am not the CM of Gujarat any more, I am humbled by the love you show towards me," he added.

6:08 pm - Modi in Gujarat to seek his mother's blessings after a historic win in Lok Sabha elections 2019

PM Narendra Modi has reached Ahmedabad Airport. He will be heading to meet his mother Hiraben to seek her blessings after a massive victory in the Lok Sabha elections. In 2014 too, the PM had visited his mother immediately after the poll results were announced, giving the BJP an absolute majority.

The President will administer the oath of office and secrecy to the Prime Minister and other members of the Union Council of Ministers at 7 pm on May 30, 2019, at Rashrapati Bhavan

Prime Minister Narendra Modi is scheduled to visit his constituency Varanasi tomorrow. He will visit the Kashi Vishwanath temple and thank the Varanasi constituents for a second consecutive win.

Modi defeated the Congress' Ajay Rai by 5,22,116 votes. He is one of the 15 BJP lawmakers to have won by a margin of over five lakh votes in the 2019 Lok Sabha elections.

"PM spoke to PM Modi today and congratulated him on his party’s electoral victory in Lok Sabha elections in India. PM expressed his desire for both countries to work together for betterment of their peoples", Mohammad Faisal, the spokesperson for Pakistan's Ministry of Foreign Affairs, tweeted.

"Reiterating his vision for peace, progress and prosperity in South Asia, the Prime Minister said he looked forward to working with Prime Minister Modi to advance these objectives", Faisal added.

Election Commission says 'model code of conduct has ceased to be in operation with immediate effect after results of Lok Sabha elections and Legislative assemblies in the states of Andhra Pradesh, Arunachal Pradesh, Odisha and Sikkim.' pic.twitter.com/e6qV4pOgE2

After swearing-in for his second term, PM Modi will go to Maldives for his first bilateral foreign visit. He is likely to visit Maldives on June 7 – 8.

Andhra Pradesh CM-designate Jagan Mohan Reddy has assured of banning liquor in a phased manner in the state, the New Indian Express has reported. The YSR Congress Party chief ultimately plans to make Andhra an alcohol-free state by 2024.

According to official sources, the first parliamentary session of the 17th Lok Sabha will be held in mid-June. The government sources said that although the dates haven't been decided on, the session will likely convene either on June 15 or June 16.

Thank you Prime Minister Mahathir for your greetings! I fondly recall our meeting last year and look forward to working closely with you for further strengthening our multifaceted relations with Malaysia in all spheres. @chedetofficial https://t.co/AuHqXoX1rq

Andhra CM designate Jagan Mohan Reddy: Today was the first meeting with PM. God willing I'll probably meet him maybe 30, 40, 50 times over these 5 years. I'll make it a point to remind him every time, of Special Category Status...As long as we keep reminding, things will change. pic.twitter.com/QRzSHsQ8V0

Bhubaneswar: Odisha CM & BJD chief Naveen Patnaik met Governor Prof Ganeshi Lal today and conveyed to him that he has been elected as the leader of BJD legislative party. The Governor has extended invitation to Naveen Patnaik to form the government in the state. pic.twitter.com/L78oFhLcyI

"The situation would have been different had they (BJP) won just 250 seats (in the Lok Sabha elections). We would have then supported BJP only after they signed the special category status document", YSRCP chief Jagan Mohan Reddy said at a press conference following his morning meeting with Modi in New Delhi. 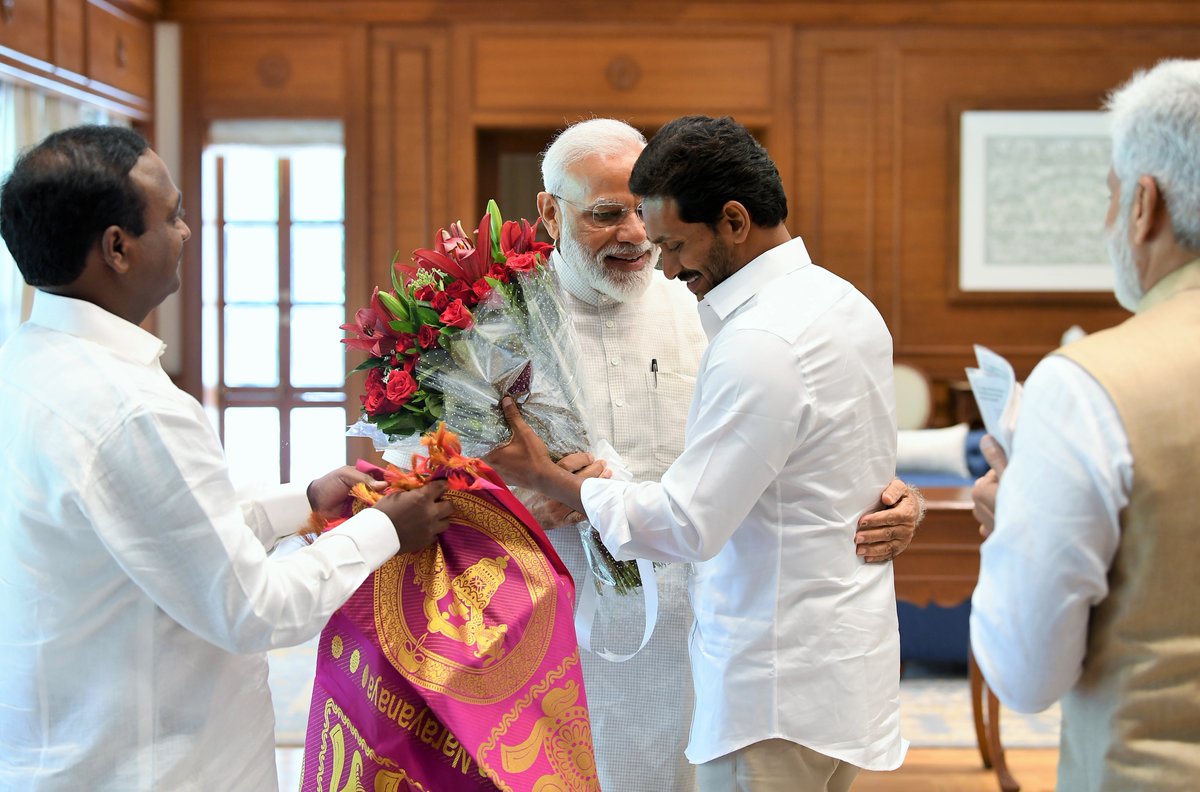 Following Modi's address to the NDA's newly-elected MPs where he asked them to reach out to the minorities who have been living in "imaginary fear", Hyderabad MP Asaduddin Owaisi has lashed out at the PM.

"If PM agrees minorities live in fear he should know people who killed Akhlaq were sitting in front bench of electoral public meeting...If PM feels Muslims live in fear, will he stop gangs, who in name of cow are killing, beating Muslims, taking our videos & demeaning us?", Owaisi was quoted as saying by ANI.

"If Muslims seriously live in fear can the PM tell us, out of the 300 odd MPs, how many Muslim MPs he has in own party who got elected from Lok Sabha? This is the hypocrisy and contradiction which the PM and his party is practicing from last five years", he added.

Of the 303 BJP MPs who will constitute the 17th Lok Sabha, there is no Muslim. BJP nominated six Muslim candidates among its 437-strong field but none of them won.

2:00 pm Congratulations keep pouring in, this time from Brazil's Bolsonaro

However, the Brazilian president took time from his domestic troubles to congratulate PM Modi on his historic mandate.

Thank you President @jairbolsonaro. I look forward to making your acquaintance and working with you to develop India-Brazil relations in all spheres, and our cooperation in multilateral fora, including BRICS under your Chairmanship. https://t.co/j5lc2RidhD

Had an excellent meeting with Andhra Pradesh’s CM designate @ysjagan. We had a fruitful interaction on several issues pertaining to AP’s development. Assured him all possible support from the Centre during his term. pic.twitter.com/u7bwPGI4t6

Singh was an aide to Irani, a former television actress and dogged minister in PM Modi's cabinet.

The Amethi constituency had been held by the Gandhi family almost continuously for the last four decades.

"Intensive investigation is underway", the UP DGP, OP Singh was quoted saying by ANI. "We've found vital clues. Seven people detained for questioning. We're confident of solving the case in the next 12 hours. Three companies of PAC are deputed, no law and order situation." Read more here

Biju Janata Dal secured 12 of the 21 seats in Odisha as the BJP came a close second with eight and the Congress finished a distant third with a solitary constituency in their kitty.

Today, the 12 BJD MPs met the state CM Patnaik, who is gearing up to take oath as CM for a fifth time.

12: 25 pm Modi to arrive in Ahmedabad in the evening

PM Modi and BJP chief Amit Shah will fly on the same flight to Ahmedabad and are scheduled to arrive at the airport at 6 pm.

The duo will proceed to the Khanapur BJP office, where a public meeting is scheduled at 6.45 pm and will last for an hour. Around 8.30 pm, Modi will reach Gandhinagar Rajbhavan for night halt.

On Monday morning, he is expected to visit his mother Hiraba before departing for Varanasi at 8 am. Shah will accompany the PM during the Varanasi as well.

There will be 197 re-elected MPs heading to the Lok Sabha, while 300 MPs have been elected for the first time in the lower house of Parliament. In 2014, there were 314 first time MPs, while those re-elected were 169, according to data from PRS Legislative Research.

The average age of an MP is 54, with 12 percent of the law makers aged between 25-40 and only 6 percent septuagenarians.

The women in the next Lok Sabha will be on average 6 years younger than their male counterparts. 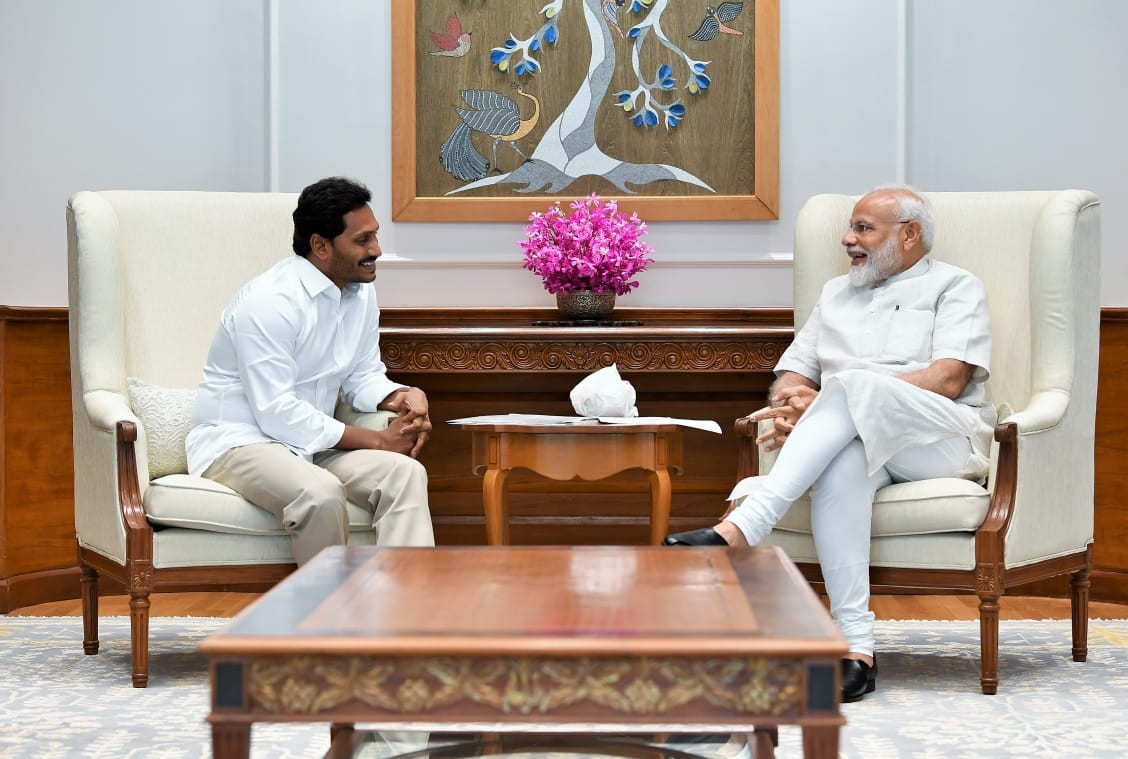 11:40 am Modi must be taken at his word, Rahul Gandhi must resign

We must persist and engage Prime Minister Modi in dialogue, without suspicion on his intent, without casting aspersions or attributing every action of his to forces in the shadow from the RSS, writes GR Gopinath. Read here: A manifesto for the victor and vanquished: PM Modi must be taken at his word, Rahul Gandhi must resign

YSR Congress Party secured a resounding win in Andhra Pradesh. The party won 22 of the 25 Lok Sabha seats in the state and secured 150 of the 174 seats in the assembly elections, paving the way for party president YS Jaganmohan Reddy to be the next chief minister of the state.

Reddy is scheduled to meet PM Modi today and is expected to take up the issue of special status for Andhra Pradesh.

In his first visit to his home state after the BJP’s resounding victory in the 2019 general elections, Prime Minister Narendra Modi will visit Gujarat today.

Accompanied by party chief Amit Shah, Modi will seek the blessings of his mother Hiraba. He will also be felicitated by the Gujarat unit of the party.

On Saturday, PM Modi was appointed the prime minister-elect by President Ram Nath Kovind, who also invited him to form the new government.

After the BJP and the National Democratic Alliance (NDA) unanimously elected him as their leader, Modi reached the Rashtrapati Bhawan Saturday night to stake claim to form the next government.