The Bharatiya Janata Party (BJP) has named Tajinder Pal Singh Bagga as its candidate from the Hari Nagar constituency for the Delhi assembly elections 2020 on February 8. The candidature underscores both the swift rise of Bagga through the BJP ranks and the eagerness of political parties to reward workers if they can successfully combine eccentric brand of politics and social media activism — unkind critics would call it trolling — on issues.

No one represents this kind of politics better, or cruder, depending on one’s perspective than Bagga, currently serving as the BJP's Delhi spokesperson.

Bagga belongs to a category of political workers who are fervid in flashing a kind of ultra-brand politics of nationalism, that borders on the menacing and spills into bouts of hooliganism.

Bagga started his career with a fringe-outfit named Bhagat Singh Kranti Sena, a so-called "task force against traitors, anti-nationals and corrupts".  He first thrust himself into the limelight in October 2011 after thrashing lawyer-activist Prashant Bhushan.

Bagga was aggrieved that Bhushan was advocating holding a plebiscite in Jammu and Kashmir. The attack on Bhushan was captured live on TV screens. Bagga got his 15 minutes of fame and a springboard to launch into full-time politics.

His message, which he publicised later in a Facebook post, was clear: in case anyone had doubts. "If you will try to break my nation, I will break your head," he said.

Bagga made headlines again after he barged into a seminar and attacked writer Arundhati Roy during an event. His outfit also defaced walls around the Pakistan High Commission and pasted posters demanding freedom for Balochistan.

In 2012, the Bagga-led BSKS threatened to force Swami Agnivesh to drink urine after the latter voiced concerns over news reports that a Visva-Bharati University girl was forced to drink urine by her hostel warden for bedwetting.

In 2015, Bagga undertook steps that would open the doors of the BJP. BSKS launched an online news and opinion blog dedicated to Prime Minister Narendra Modi. He called it the NaMo Patrika. Two years later, he was named a spokesman.

Besides trooping on social media, waging a relentless battle against what he sees are anti nationals, which often is synonymous for his ilk as anti-BJP, Bagga also sells T-shirts.

The products espouse issues he holds dear. Kashmir Human shield t-shirts, for example, takes cues from an incident involving the Indian Army where a Kashmiri citizen was tied to a jeep by a major to protect his troops from stone pelters.

Bagga has never been far from controversies. He has been embroiled in spats with JNU student leader Umar Khalid and Bollywood actors Swara Bhaskar and Deepika Padukone. He is vocal on several issues, including the Citizenship Amendment Act. 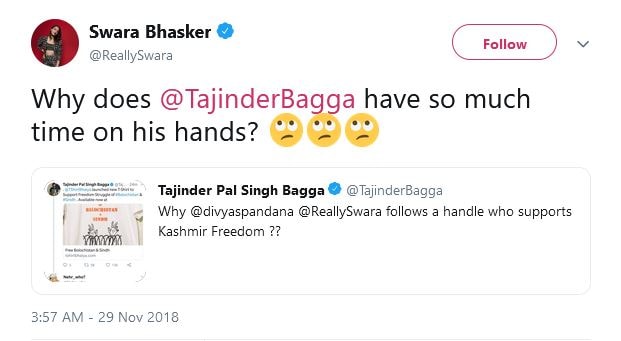 Bagga is a social media darling among right-wing supporters, with more than 6.4 lakh followers on Twitter. In 2015, he was part of a BJP group of top social media influencers that met Prime Minister Narendra Modi at his official residence. In fact, Bagga has shared the moment of his meeting with PM Modi and other BJP leaders on his Facebook wall.

Bagga was mocked on Twitter for omission from the BJP's first list of candidates. A media report said he wanted to contest from Tilak Nagar but the party had other thoughts. He will face the ruling AAP's Princess Dhillon in Hari Nagar.

The voting for the 70-member Delhi assembly will be held on February 8. The counting of votes will take place on February 11.

The BJP faces a tough battle in Delhi where it has been out of power for over two decades. The party could win only three seats in the last assembly polls with the ruling AAP scoring a landslide victory with 67 seats.
Tags Bharatiya Janata Party Election 2020 Hari Nagar Tajinder Pal Singh Bagga