Scenes from a Priyanka Gandhi rally in Salempur Lok Sabha constituency: Delay and wreckage by harsh weather and the long wait after

Updated : May 16, 2019 12:44 PM IST
Congress candidate Rajesh Mishra is up against the Bahujan Samaj Party’s RS Kushwaha and incumbent BJP MP Ravinder Kushwaha in Salempur.
Priyanka Gandhi’s rally was due to begin at 2 pm on Wednesday.
But gusts of wind accompanied by heavy rain wreaked havoc on the venue and caused a two-hour delay.

Few election rallies in India go according to plan. Politicians are notoriously late, often by their own will and sometimes due to uncontrollable factors. There are a hundred things that can go wrong. But the most unsettling things that roil a rally are gusts of wind accompanied by heavy rain.

One such unfortunate incident befell a rally to be addressed by Congress leader Priyanka Gandhi at Salempur in Uttar Pradesh on Wednesday (Congress candidate Rajesh Mishra is up against the Bahujan Samaj Party’s RS Kushwaha and incumbent BJP MP Ravinder Kushwaha in this constituency.) The rally was to begin at 2 pm, but sudden showers and strong winds wreaked havoc on the venue.

A stage that was to accommodate roughly 20 people on chairs, a large poster, two cooler fans and one lectern collapsed. Tarpaulins that were to shield the crowd from the blazing sun lay in tatters on the ground.  Flags, posters and other election paraphernalia were blown away.

A crowd of around 1,000 that had gathered took shelter hastily in nearby shops and under trees. They were soon joined by the police. People waiting for Priyanka Gandhi to arrive at a rally in Salempur, Uttar Pradesh.

It was going to be a long day, or so it seemed. Luckily, the rain did not last long.

The organisers sprung into action. A makeshift stage was erected in no time. Plastic chairs that lay scattered were quickly rearranged.

But the tarpaulins were wet and useless. That did not bode well for the rally because the sun was merciless.

Still, it was time to get things going. A bunch of Congressmen quickly assembled on the stage and began a common feature in such programmes — filler speeches — to keep the crowd occupied until senior leaders arrive.

There were still several unconvinced people milling outside of the venue. Even youngsters dressed in T-shirts brandishing the Congress’ Nyay scheme idled away from the venue.

They knew exactly how things would play out.

The inclement weather would delay Priyanka Gandhi’s arrival by at least two hours. They saw little sense in occupying chairs until her arrival. Not in that heat.

Chairs were positioned strategically, diametrically opposite the two sides of the ground, under the shadow of trees for protection from the sun.  Some people settled under a stage erected for camera crew.

Attendance seemed thin for a rally devoted to a national leader. Besides the rains, the period of Ramzan also kept people away, an organiser explained.

He and others were understandably worried.

A few faithful gathered at the front. Their heads were wrapped in turbans. Bottles of water were passed around.

But there were still large swathes of empty chairs. Someone from the stage pleaded to fill them. 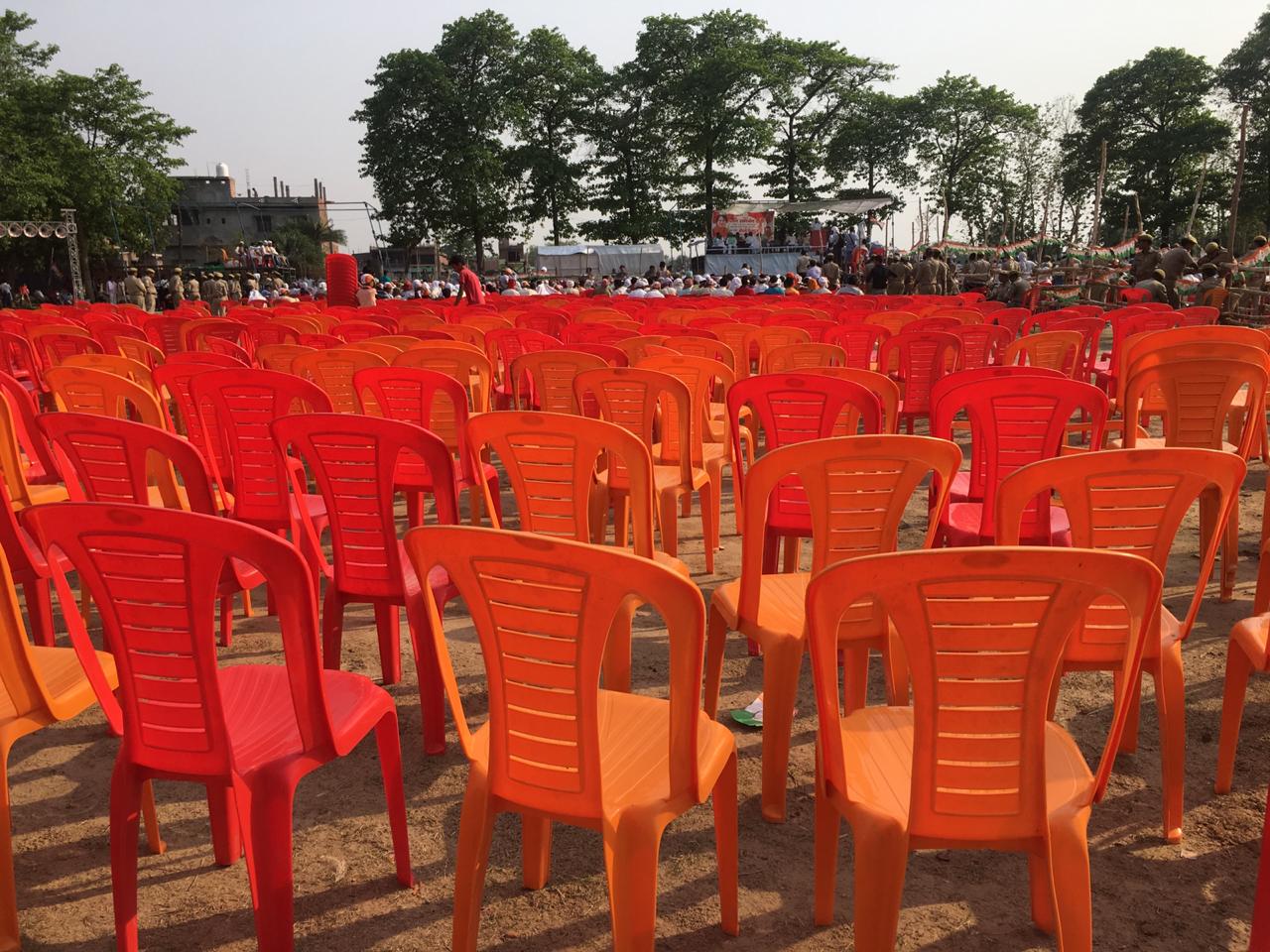 Attendance seemed thin for a rally devoted to a national leader. Besides the rains, the period of Ramzan also kept people away, an organiser explained.

The crowd was unmoved. Few political ideologies in India can rise above the sun.

The filler speeches turned out to be listless and barely received applause. Enthusiasm was lacking even for chants of zindabad.

The crowd was dominated overwhelmingly by men. Even on the stage, there was no woman.

Someone noticed. One woman trudged up the stage and occupied a seat.

A couple of children began to move the chairs to reduce the effect of poor attendance. It was to no avail. The crowd was dominated overwhelmingly by men. Even on the stage, there was no woman.

A sense of uneasy calm swept over the venue. A fire engine and four police jeeps idled nearby.

It was 4 pm. The crowd was growing impatient. “How long do they expect us to wait,” one man muttered.

“She is coming,” someone shouted from the crowd. Taking cue, the speaker on stage assured the crowd that Priyanka Gandhi was on her way.

The crowd was now bustling in anticipation. The chairs began to fill. The police were now alert and took positions at various parts of the venue.

Soon a parade of nine vehicles approached the venue from an adjacent road. Several people rose from the chairs to catch a glimpse of Priyanka Gandhi. Necks were craning towards the direction of vehicles. Cellphones were out, held high.

A couple of barricades were broken as people scrambled towards the side of the stage. Congress workers began to wave flags briskly.

Slogans of ‘Priyanka Gandhi Zindabad’ filled the air... Crowds began to swell up to create a respectable size. Priyanka Gandhi, dressed in a red sari, walked hurriedly up steps to the stage and waved to the crowd. She took one of the chairs.