Riding on strong anti-incumbency in Rajasthan against the Bharatiya Janata Party (BJP) government, the Congress on Tuesday returned to power in the desert state, winning 99 seats, while the saffron party was relegated to a distant second spot winning 73 seats. 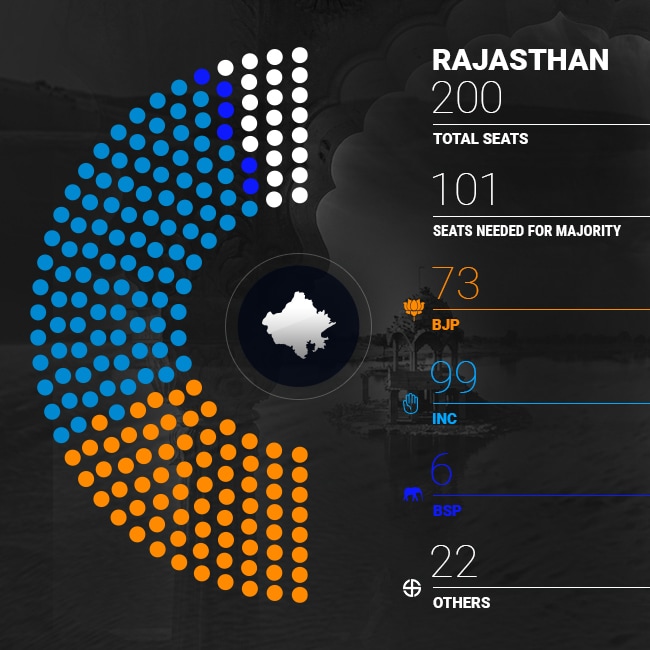 Further, PTI reported that Congress president Rahul Gandhi will take the final call on December 12 on who will be the chief minister in Rajasthan after taking in account the opinion of the newly elected MLAs, a senior party leader said. Senior party leader Ashok Gehlot and Pradesh Congress Committee president Sachin Pilot are the contenders for the coveted post.

"Congress legislature party (CLP) meeting will be held at 11 am on December 12 in which the elected MLAs of the party will pass a resolution. The observer will seek an individual opinion of the MLAs," AICC general secretary Avinash Pande said.

He said the Congress president will be apprised of the feedback and a second meeting of the CLP will be held on December 12. The decision on the chief ministerial candidate would be announced after the second meeting, he said.

"Apart from the discussion on the name of CLP leader, several other issues will be discussed in the meeting" he said.   When asked whether there is any other name for the post, Pande said that it will depend on the newly elected legislators. The AICC has sent K C Venugopal to Jaipur as observer.

As many as 13 of 19 ministers in the outgoing Vasundhara Raje government have lost the Assembly elections in Rajasthan as results and trends brought electoral reverses for the ruling BJP. However, Raje and her five cabinet colleagues have won their respective constituencies.

The chief minister won the Jhalrapatan seat with a margin of 34,980 votes by defeating her nearest rival and Congress leader Manvendra Singh, the son of veteran BJP leader Jaswant Singh. She had won the seat in 2013 elections with a margin of 60,896 votes.

Khan lost the Muslim-dominated seat of Tonk to Pradesh Congress Committee President Sachin Pilot with a margin of 54,179 votes. He was the only Muslim candidate fielded by the BJP in the state.

PHED minister Surendra Goyal (Jaitaran) and Devsthan minister Rajkumar Rinwa (Ratangarh) had turned rebel after the BJP denied them ticket and they contested the elections as independents. Both have lost their respective seats.

Raje, the daughter of Jivaji Rao Scindia, the last reigning Maharaja of Gwalior, and Vijayaraje Scindia, a prominent BJP leader, ruled Rajasthan as chief minister from 2003-2008 and from 2013-2018 and was leader of opposition from 2008 to 2013.

Raje said she is proud of the development work done by her government and respects the mandate of the people. Raje, who submitted her resignation to governor Kalyan Singh at Raj Bhawan in Jaipur, congratulated the Congress party. She said that the BJP will raise people's issues in the state assembly and will play a positive role for public welfare.

"I am proud of the development works done by the BJP government in five years and believe that the upcoming government will continue the works and projects," Raje said in a statement. She thanked the people of the state, BJP workers, the prime minister and the BJP chief, saying they stood by her as family. "Raje handed over her resignation to the Governor tonight, a Raj Bhawan spokesperson said.

Rajasthan has a 200-member assembly but polling in Alwar's Ramgarh constituency was postponed following the death of the BSP candidate there.