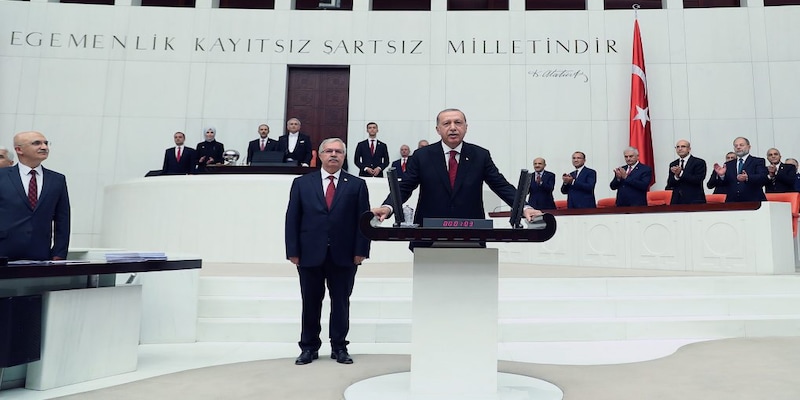 Assuming the new executive presidency he has long fought to establish, Erdogan took the oath of office in parliament before addressing international leaders gathered at the presidential palace in Ankara.

President Tayyip Erdogan pledged to build a "strong Turkey" with a powerful defence industry and expanding economy as he was sworn in on Monday with sweeping new powers over a country he has dominated for 15 years.

Assuming the new executive presidency he has long fought to establish, Erdogan took the oath of office in parliament before addressing international leaders gathered at the presidential palace in Ankara.
"We, as Turkey and as the Turkish people, are making a new start here today," he told the dignitaries and thousands of guests. "We are leaving behind the system that has in the past cost our country a heavy price in political and economic chaos."
Erdogan, 64, says the new, powerful executive presidency is vital to drive economic growth, ensure security after a failed 2016 military coup and safeguard Turkey from conflict across its southern border in Syria and Iraq.
"We are embarking on this road by using this opportunity as best we can for a strong parliament, strong government and strong Turkey," he said.
The introduction of the new presidential system marks the biggest overhaul of governance since the republic was established on the ruins of the Ottoman Empire nearly a century ago.
The post of prime minister has been scrapped and the president will now be able to select his own cabinet, regulate ministries and remove civil servants, all without parliamentary approval.
Erdogan's supporters see the changes as just reward for a leader who has put Islamic values at the core of public life, championed the pious working classes and overseen years of strong economic growth.
Opponents say the move marks a lurch to authoritarianism, accusing Erdogan of eroding the secular institutions set up by modern Turkey's founder, Mustafa Kemal Ataturk, and driving it further from Western values of democracy and free speech.
"Institutionalised Autocracy"
Marc Pierini, a former EU ambassador to Turkey and visiting scholar at Carnegie Europe, said Erdogan's new powers would effectively make him a "super-executive president".
"Most powers will be concentrated in his hands, there will no longer be a prime minister, and almost none of the checks and balances of liberal democracies will be present. In other words, Turkey will be an institutionalised autocracy."
Erdogan will name a streamlined cabinet of 16 ministers on Monday evening after the ceremony at the presidential palace, which state news agency Anadolu said was attended by Venezuelan President Nicolas Maduro, Russian Prime Minister Dmitry Medvedev and Sudanese President Omar Hassan al-Bashir, who is wanted for war crimes by the International Criminal Court.
No major Western leader featured on a list of 50 presidents, prime ministers and other high-ranking guests.
Turkey is a member of the Western military alliance, NATO, but it has been at odds with the United States over military strategy in Syria and with the European Union over Ankara's large-scale purges of state institutions, armed forces, police and media following the failed coup.
Cabinet Appointees
Investors were waiting to see whether cabinet appointees would include individuals seen as market-friendly, and particularly whether Mehmet Simsek, who served as deputy prime minister, would continue to oversee the economy, said Inan Demir, a senior economist at Nomura International.
The lira, which is down 16% so far this year, was little changed from its opening at 4.5680 at 1700 GMT. It had gained earlier in the day but then briefly dropped more than 1 percent after a decree removed a clause stipulating a five-year term for the central bank governor.
Scrapping the term would remove a shield that helps ensure the bank's independence from politicians, former central banker Ugur Gurses said. A senior adviser to Erdogan later said that governors would still be appointed for a five-year term.
The lira has been battered by concern about Erdogan's drive for lower interest rates and by comments in May that he planned to take greater control of the economy after June's elections.
"We will strengthen our defence industry and border security. We will make very big investments in every area ... in order to become one of the 10 largest economies," Erdogan said.
Inflation surged last month above 15%, its highest level in more than a decade, even though the central bank has raised interest rates by 5 percentage points since April.
Check out our in-depth Market Coverage, Business News & get real-time Stock Market Updates on CNBC-TV18. Also, Watch our channels CNBC-TV18, CNBC Awaaz and CNBC Bajar Live on-the-go!