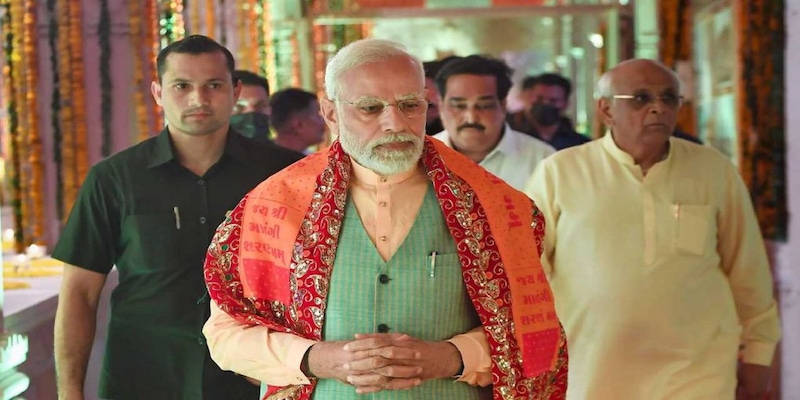 In Ahmedabad, PM Modi will inaugurate the Modi Shaikshanik Sankul -- an educational complex for needy students. The project will help provide facilities to students for holistic development, as per a government release. He will also address a public rally at Vallabh Vidyanagar in Anand district.

Prime Minister Narendra Modi dedicated to the nation various projects worth more than Rs 8,000 crore at Amod in Bharuch district of Gujarat. Modi is on a three-day visit to Gujarat from Sunday, ahead of the Assembly polls due in the BJP-ruled state later this year. He laid the foundation stone of a bulk drug park at Jambusar and a deep sea pipeline project at Dahej in Bharuch district. He also participated in the ground-breaking ceremony for the development of multiple industrial parks in the district.

In Ahmedabad, the prime minister will inaugurate the Modi Shaikshanik Sankul -- an educational complex for needy students. The project will help provide facilities to students for holistic development, as per a government release. PM Modi will also address a public rally at Vallabh Vidyanagar in Anand district.
In the evening, he will inaugurate and lay the foundation stone of projects worth Rs 1,460 crore in Jamnagar. These projects are related to irrigation, power, water supply and urban infrastructure.
Here are the latest updates:
# When I became PM, India was ranked 162 globally in ease of doing business; after hard work, we are now ranked 63: PM Narendra Modi
# India has started project Dolphin after Chitah. Govt is making a big scheme for the conservation of Dolphin, we will develop eco-tourism off the Gujarat coast: PM Modi
# India's rank was 10 in the world's economy in 2015, current rank is 5: PM Modi
# High inflation in Europe and USA, only India's economy is stable, says PM Modi
# Amrutsar Bhatinda-Jamangar corridor is being developed at the cost of Rs 2600 crore, says PM Modi
# Jamnagar factories refine 35 percent oil of total India's production, says PM Modi
# PM addressed BJP president C R Paatil as the winner with highest votes in 2019 general election.
# PM Narendra Modi dedicates and lays the foundation stone of projects related to irrigation, power, water supply and urban infrastructure worth around Rs 1,450 crore in Jamnagar.
# Jamnagar: PM Narendra Modi arrives at the venue, will address rally shortly
# PM Modi holds roadshow in Jamnagar
# World's biggest solar park, everywhere development works are happening, world's biggest statue in Gujarat, biggest hub of traditional hub is coming up in Gujarat, first bulk drug farm also in Gujarat, country's first Gati Shakti University, first Raksha Shakti University also in Gujarat: PM Modi
# When I became Gujarat CM, I did not have much experience in administration. But it is our privilege that CM Bhupendra Patel has an experience of around 25 years ranging from panchayat to Assembly: PM Modi
# I am happy to announce that now along with industrial development, Bharuch will also be home to an international airport. This airport will play an important role in increasing exports from Gujarat: PM Modi
# Gujarat will not allow 'Urban Naxals' to destroy life of state's youth: PM Modi
"Due to Urban Naxals, we wasted 40-50 years of time before the construction of the Sardar Sarovar dam on the Narmada river. Today after various efforts, the construction of the Sardar Sarovar dam has been completed," he says.
# PM Modi inaugurates various schemes worth over Rs 8000 crore in Bharuch.