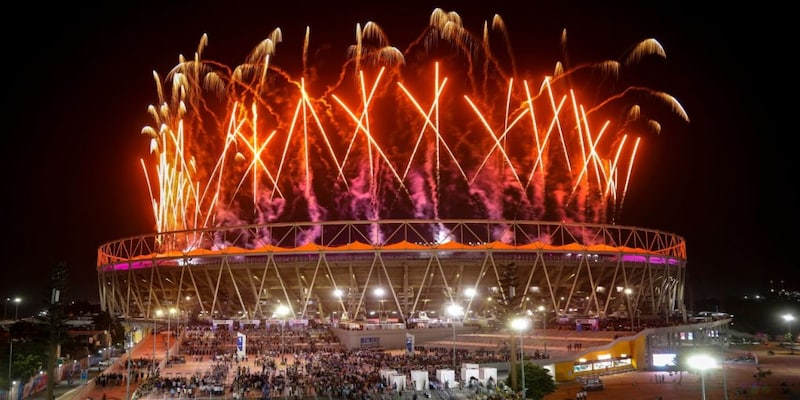 PM Narendra Modi will begin his visit from Surat by addressing a gathering in the Limbayat area of the city after launching various projects worth Rs 3,400 crore, including the inauguration of the main entrance gate and phase-1 works of Diamond Research and Mercantile (DREAM) City.

Prime Minister Narendra Modi will be on a two-day visit to Gujarat from Thursday where he will inaugurate or lay foundation stones for various projects and inaugurate the 36th National Games which are being held for the first time in the state. Gujarat, the home state of Modi, faces Assembly elections by the year-end and the ruling Bharatiya Janata Party (BJP) is making all-out efforts to retain power in the state, which it has ruled for nearly three decades now.

The PM will begin his visit from Surat by addressing a gathering in the Limbayat area of the city after launching various projects worth Rs 3,400 crore, including the inauguration of the main entrance gate and phase-1 works of Diamond Research and Mercantile (DREAM) City. He will then go to Bhavnagar to launch projects worth nearly Rs 6,000 crore, including the stone laying of the world's first CNG terminal and a brownfield port in Bhavnagar, a state government release said.
Here are the latest updates from PM Modi's visit to Gujarat:
#  The contingents of all states and union territories arrive at the 36th National Games opening ceremony at Narendra Modi stadium in Ahmedabad, Gujarat.
# Prime Minister Narendra Modi declares the opening of the 36th National Games at the Narendra Modi stadium in Ahmedabad.

# "The sports budget of the country has increased by about 70 percent in the last 8 years, Until 8 years ago, Indian athletes participated in less than 100 international events. Now Indian players participate in more than 300 international events,” the PM said.
# Fit India and Khelo India have become a mainstream movement. That is why, today, more and more resources are being provided to players, as well as more and more opportunities: PM Modi
# The success of the players on the field of play, as well as their great performance, lays the path for the country's victory in other sectors. The soft power of sports multiplies the nation's identity and image: Prime Minister Modi
# The world's largest stadium is holding the world's largest sporting event for the country with the youngest population. When an event is as beautiful and unique as this one, the energy will be equally so, said PM Modi.
# PM Modi welcomes participants, chants "Judega India-Jitega India" slogan loudly to the audience.
# PM Modi virtually inaugurates Swarnim Gujarat Sports University
# Cultural events are being held at Narendra Modi Stadium in preparation for the 36th National Games.
# Prime Minister Narendra Modi, Gujarat Chief Minister Bhupendra Patel, Governor Acharya Devvrat, and Union Minister Anurag Thakur are among the dignitaries in attendance.
# PM Modi arrives to inaugurate National Games at grand opening ceremony in Ahmedabad
# For the first time, the National Games are being hosted in Gujarat. It will take place from September 29th to October 12th, 2022.
# The 36th National Games will be inaugurated by Prime Minister Narendra Modi during a magnificent Opening Ceremony at the Narendra Modi stadium in Ahmedabad.
# Preparations at Narendra Modi stadium ahead of declaring open the 36th National Games. Crowds gather at the stadium in Gujarat.
# Referring to the Ghogha-Dahej Ro-Ro service, Modi says, till date, 3 lakh passengers and 80,000 vehicles have benefited with this service. The use of sea route instead of the 400 km long journey from Bhavnagar to south Gujarat has helped save 40 lakh litres of petrol/diesel.
# Our government is dedicated to the service of the poor and committed to bring in a transformation. This intention is solely service and not staying in power: PM Modi
# The new projects will revitalise Bhavnagar's development, which will play an important role in strengthening the Atmanirbhar Bharat mission: PM Modi
# This port of Bhavnagar will play a big role in building a self-reliant India and hundreds of new employment opportunities will be created here. Business-business related to storage, transportation and logistics will expand here: PM Modi
# PM Narendra Modi lays the foundation stone for projects worth Rs 6,627 crore in Bhavnagar district. The world's first CNG terminal, a water supply scheme, Bhavnagar's modern bus port, a regional science centre, a 25 MW solar power project in Palitana, a cargo container manufacturing unit, a 32 MLD sewage treatment plant in Botad, and a renovated town hall are among the projects.
# People shower flower petals on PM Modi's car as he holds a roadshow in Gujarat's Bhavnagar.

PM will lay the foundation stone of the World’s first CNG Terminal and of brownfield port at Bhavnagar(Source: DD) pic.twitter.com/2K27YBJQ0F— ANI (@ANI) September 29, 2022

# "In the last two decades, we built around 80,000 homes for the poor in Surat, uplifting their standard of living. Under the Ayushman Bharat scheme, about 4 crore poor patients got free medical treatment in the country, of which over 32 lakh patients are from Gujarat and 1.25 lakh from Surat," says Modi.
# "It's my privilege to lay the foundation stone for infrastructure, sports & spiritual destinations in Gujarat during ongoing celebrations of Navratri. Surat is a great example of 'Jan Bhagidari' and unity. People from across India live in Surat, it's a mini-India," says Modi.
# PM Modi lays the foundation stone and dedicate various projects worth more than Rs 3,400 crores in Surat.
# A huge crowd gathers to welcome PM Narendra Modi in Gujarat.

Surat | A huge crowd gathers to welcome PM Narendra Modi as he arrives on a two-day visit to Gujarat.

# PM Modi is scheduled to lead a two-kilometre-long road show in Bhavnagar.
# Modi will declare open the 36th National Games at a gala ceremony in the Narendra Modi stadium in the Motera area of Ahmedabad city in the evening.
# Modi is scheduled to attend the Gujarat government's Navratri festival at GMDC ground in Ahmedabad.
# On Friday, Modi will flag off the maiden Vande Bharat Express train between Gandhinagar and Mumbai Central. He will flag off the semi-high-speed train from Gandhinagar Capital railway station at around 10:30 am. He will also take a ride on the train from Gandhinagar to Kalupur station of Ahmedabad.
# From Kalupur, Modi will inaugurate phase 1 of the much-awaited Ahmedabad Metro project, completed at a cost of Rs 12,925 crore. Modi will board the metro train at Kalupur and reach Doordarshan Centre in Thaltej, where he is scheduled to address a gathering at around 12 pm.
# In the evening, Modi will reach the Ambaji town of Banaskantha district to launch various projects worth Rs 7,200 crore. After addressing a gathering, he will perform 'aarti' at the famous Ambaji Temple and pay his respects to the deity.
Check out our in-depth Market Coverage, Business News & get real-time Stock Market Updates on CNBC-TV18. Also, Watch our channels CNBC-TV18, CNBC Awaaz and CNBC Bajar Live on-the-go!