PM Modi vs Rahul Gandhi: Who wins on financial planning?

Updated : May 06, 2019 02:52 PM IST
While Modi’s portfolio does not have a single mutual fund scheme, Gandhi’s portfolio has a sizeable investment in mutual funds. Nearly 70 percent of his portfolio is invested in equity mutual funds (MF), including a small holding through directly-held shares of a single company.
Equities have outperformed all other asset classes over the long run. Over five-year time periods, spread across the past 10 years, actively-managed equity funds have returned close to 15 percent returns in the past, according to Value Research figures.
Modi seems to have chosen the National Saving Certificate while Gandhi seems to have chosen a mix of NSC and Public Provident Fund (PPF).

India's prime minister Narendra Modi from the Bhartiya Janata Party and his chief challenger Rahul Gandhi from the Congress are busy in the race to form the next government of India, along with several other regional challengers.

But like every other citizen of the country, they too have to manage their money box.

Will their portfolios take care of their sunset years, are they sufficiently insured, have they diversified enough -- these are some of the questions they may face as much as anyone else.

Moneycontrol decided to look into their portfolios, part of mandatory disclosures in their affidavits of assets and liabilities that every citizen who contests the Lok Sabha election has to file along with their nomination papers. What can the nation learn from their portfolios? 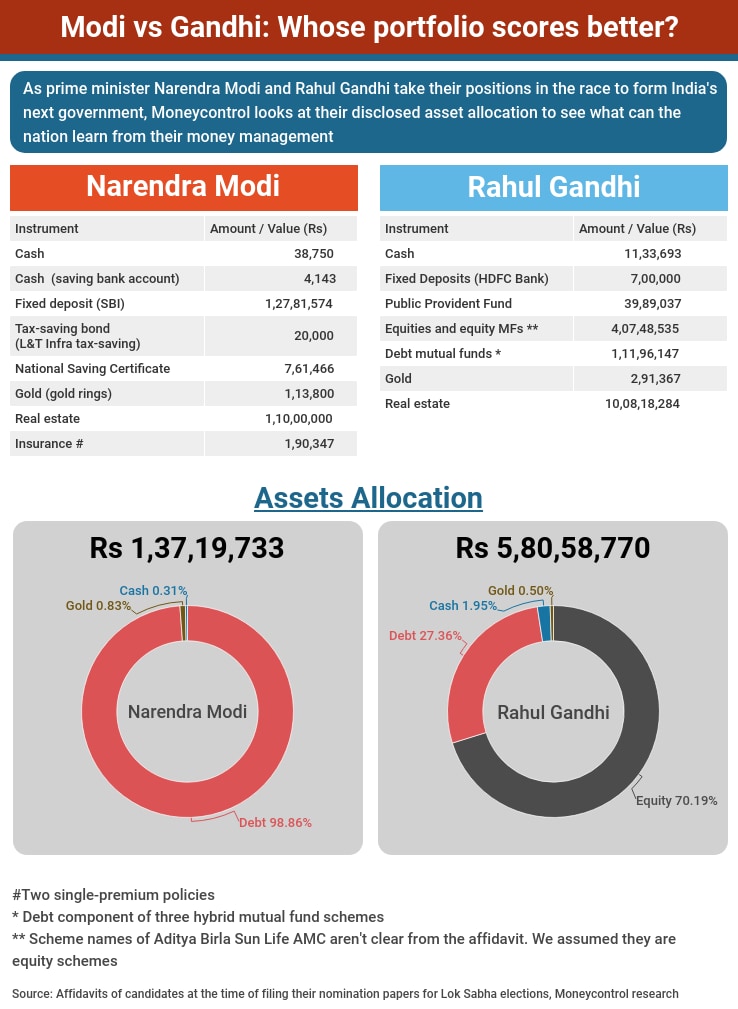 While Modi’s portfolio does not have a single mutual fund scheme, Gandhi’s portfolio has a sizeable investment in mutual funds. Nearly 70 percent of his portfolio is invested in equity mutual funds (MF), including a small holding through directly-held shares of a single company.

His investments in MFs total around Rs 5.17 crore, which he has diversified across 10 MF schemes; eight equity MFs and 2 hybrid schemes.

"Gandhi has a concentrated portfolio of some good funds that come with a good, long-term, track record. Even though the total invested amount is large, he has kept the number of schemes to a manageable number,” says Kalpesh Ashar, founder, Full Circle Financial Planners, and Advisors.

Gandhi seems to like mutual funds, an investment vehicle that we at Moneycontrol consistently recommend to all our readers.

Equities have outperformed all other asset classes over the long run. Over five-year time periods, spread across the past 10 years, actively-managed equity funds have returned close to 15 percent returns in the past, according to Value Research figures. Even if you had just invested in index funds (that are passively-managed and therefore avoids fund manager intervention), you’d have earned around 12 percent over 5-year time periods in the past 10 years, on average.

However, Vishal Dhawan, founder, and chief executive officer of Mumbai-based Plan Ahead Wealth Advisors, feels that Gandhi’s selection of MF schemes could have been better. “The schemes, though good, are mostly multi-cap funds. Most of the multi-cap schemes tend to behave the same way when markets go up or down,” says Dhawan.

This is the first step towards building a healthy portfolio. Most financial planners suggest a mix of equities and debt instruments in portfolios, depending on your age, what you’d like to do with your money and how much risk you are comfortable in taking.

Here too, Gandhi scores as he has invested 70 percent in equities, 27 percent in cash and the rest in gold and cash. “Considering he doesn’t seem to have any immediate goals, he is aggressive in equities. He has invested for the long run,” says Mumbai-based financial planner Gaurav Mashruwala.

Modi, on the other hand, does not have any equity investments. Almost his entire portfolio, 99 percent, is invested in debt instruments. Rest is in gold (four gold rings) and a small portion of the cash.

Typically- and as far as asset allocation goes - Modi’s portfolio may not pass the muster for many financial planners, but Ashar says that an individual’s profile is also crucial while deciding the asset allocation.

“Ideally, Modi’s portfolio should have 30 percent in equities. But he has no dependents. Also, it doesn’t look like he is going to retire anytime soon. His debt investments (more of that later) are enough to cover his retirement years as well as a life-long government pension he is likely to get. He can be forgiven for not holding any equities,” he says.

Both Modi and Gandhi seem to have diligently done their tax-saving investments every year.

Modi seems to have chosen the National Saving Certificate while Gandhi seems to have chosen a mix of NSC and Public Provident Fund (PPF).  Modi has invested Rs 1.50 lakh in each of the past three financial years in NSC. Section 80C of the Income Tax act allows investments in specified instruments, including NSC, to be eligible for income tax deduction up to an amount of Rs 1.5 lakh.

Gandhi too has invested in PPF-presumably as part of his tax-planning investments- and his total value in PPF is close to Rs 39.89 lakh.

Dhawan says that Modi need not have invested the entire sum of Rs 1.5 lakh in NSC as the interest that gets accrued every year -- which is automatically reinvested -- also qualifies for section 80C tax deduction.

Both Modi and Gandhi have stuck to financial assets and less on gold. While Gandhi has invested just 0.50 percent of his portfolio in gold, Modi has four gold rings- his only holdings in gold- that form 0.83 percent of his overall portfolio. According to Gandhi’s affidavit, his gold investments amount to Rs 2.91 lakh.

Both their assets in gold pale in comparison to their financial assets, even if in the case of Modi, he has stuck to debt investments like bank fixed deposits and NSCs.

Modi also scores on account of a low real-estate holding. The only real-estate in his affidavit is his own residential building in Gandhinagar, Gujarat, which he had acquired in 2002 and now valued at Rs 1.10 crore. In fact, that’s not even an investment in the books of financial planning, since it is his primary residential home. His current residence, 7 Race Course Road at New Delhi, is his official quarters.

Gandhi, on the other hand, has an agriculture land in Mehrauli, New Delhi which he jointly owns with his sister, Priyanka Gandhi Vadra (valued at Rs 1.32 crore) and office space in a commercial building in Gurugram (valued at Rs 8.75 crore), as per his affidavit.

For the purpose of both their asset allocation, we have not accounted for their real-estate holdings.

Of his investments totaling up to Rs 1.37 crore as per his affidavit, Modi has invested Rs 1.27 crore in fixed deposits. What’s more; they are all with just one bank, State Bank of India (SBI). Although SBI is India’s largest bank and is state-owned, experts say that Modi could have diversified a bit here and considered other options, as well. “He could put some of that money in debt mutual funds,” says Dhawan.

Ashar says that his income from just this single investment ought to be enough to take care of his retirement years, though. “Being the prime minister of India and putting so much of his wealth in SBI, he has shown faith in the country’s premier institution,” adds Ashar.

Whether you are a retail investor or a high net-worth individual, a common man or a person holding a high position, taking care of your personal wealth is important. It’s comforting that both Gandhi and Modi have financialised their savings at a time when financial instruments are clearly the way to go in the future.