The News18-Ipsos exit poll showed the Bharatiya Janata Party (BJP) triumphing in 4-5 seats in Uttarakhand, eclipsing the Congress tally of 0-1. Up for grabs in the first round of election were 25 seats in Andhra Pradesh, 17 in Telangana and five in Uttarakhand.

Ipsos is the world’s top international pollster that boasts a solid track record of predicting the electoral outcomes of several elections around the world with accuracy. Telangana exit polls
The YSR Congress and TRS are expected to side with the BJP-led National Democratic Alliance (NDA) while the TDP might close ranks with the Congress-led United Progressive Alliance. 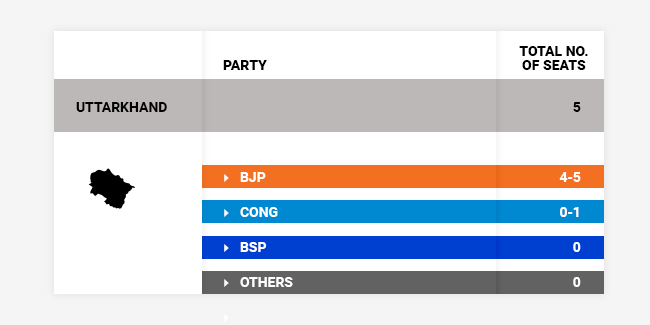 The News24-Chanakya exit poll, TRS is projected to take 14 seats, while BJP and the Congress will take one each. ABP-Neilsen hands one seat to the Congress and 16 to others, while the BJP goes empty-handed.

The ABP-Neilsen exit poll predicts the BJP to get four seats in Uttarakhand and the Congress one. While News24-Chanakya projects all five seats in favour of the BJP.

Indians voted in the seventh and final phase of national elections on Sunday, wrapping up a roughly six-week-long punishing and bitterly-fought election campaign that often turned ugly with politicians hurling personal insults at each other.