Updated : August 26, 2019 10:23 AM IST
This unusual welcome was accorded to the civil servant during his visit to review the Pradhan Mantri Gram Sadak Yojana (PMGSY) project.
The new road to Tisopi is something villagers have been long waiting for. While they now have to travel for almost three hours from Lawngtlai district, embarking on a longer, circuitous route to reach the village, the new proposed road is expected to reduce the travel time to just 30 minutes.

Villagers lined the route at remote Tisopi village in Mizoram when a palanquin carrying the deputy commissioner of Siaha district passed through. A group of locals lifted Bhupesh Chaudhary in the palanquin made of wood and cloth, and paraded him for a kilometer in ‘Maraland’ — Siaha is the headquarters of the Mara Autonomous District Council. This unusual welcome was accorded to the civil servant during his visit to review the Pradhan Mantri Gram Sadak Yojana (PMGSY) project. It was raining, and little children who had gathered on the occasion greeted the officer warmly.

“I decided to visit Tisopi when villagers visited my office and complained about the connectivity problems they face. Since there is already an on-going PMGSY project for about 15 kilometres (under construction), we decided to trek the entire route to understand the progress of the project, and the difficulties faced by the villagers every day,” said Chaudhary, adding that it was a ‘pleasant surprise’ to find a palanquin waiting for him at the end of the trek.

“It was truly an honor that can't be explained in words. Our team had trekked almost 15 kms to reach the village. I was completely overwhelmed with the warm reception by the people of Tisopi.”

The ‘palan queen’, as the British called it was a luxurious means of travel in old times. When asked if the officer felt like a British era collector on the palanquin, Chaudhary said it was a warm gesture by the villagers — a reminder of the faith and expectations people have from government servants. “I think it’s very different from the British times when they would hire people to carry them. People had to do it under fear or for the want of meager wages. We had an option to reach Tisopi using the longer route by vehicles, but we chose to trek, so as to understand first-hand the problems of the villagers and contractors. I was truly touched by the gesture. Tribal culture is very straightforward — had I not sat on the palanquin, they would have been offended.”

The new road to Tisopi is something villagers have been long waiting for. While they now have to travel for almost three hours from Lawngtlai district, embarking on a longer, circuitous route to reach the village, the new proposed road is expected to reduce the travel time to just 30 minutes.

“The project covering 15 km is divided into five segments, and work has already started for three. For the other two segments, we are expecting to start work in the coming season. However, there are challenges to overcome — the availability of construction material and adequate labour, delays due to prolonged monsoon, problem with contractors who leave the job midway are some of the issues,” said Chaudhary.

In Mizoram, because of a weak government transportation system, the private Tata Sumo service is one of the primary mode of public transport in the state. The fare for a ten-seater Sumo vehicle from Siaha to capital Aizawl, located at a distance of about 300 km, costs a staggering Rs 17,000.

“The private sumo service to Tisopi is limited because of the longer travel route through Lawngtlai. However, with the completion of the road, it is expected that the route will become shorter, and profitable for private Sumo operators,” the bureaucrat remarked.

The officer also visited the Tisopi Turmeric Processing Centre that had won the prime minister’s award under Pradhan Mantri Krishi Sinchayee Yojana (PMKSY). Of the 89 households in the village, 30 families had taken up turmeric cultivation, but according to Chaudhary, the award has not proved beneficial for the self-help group (SHG) involved in the mission. 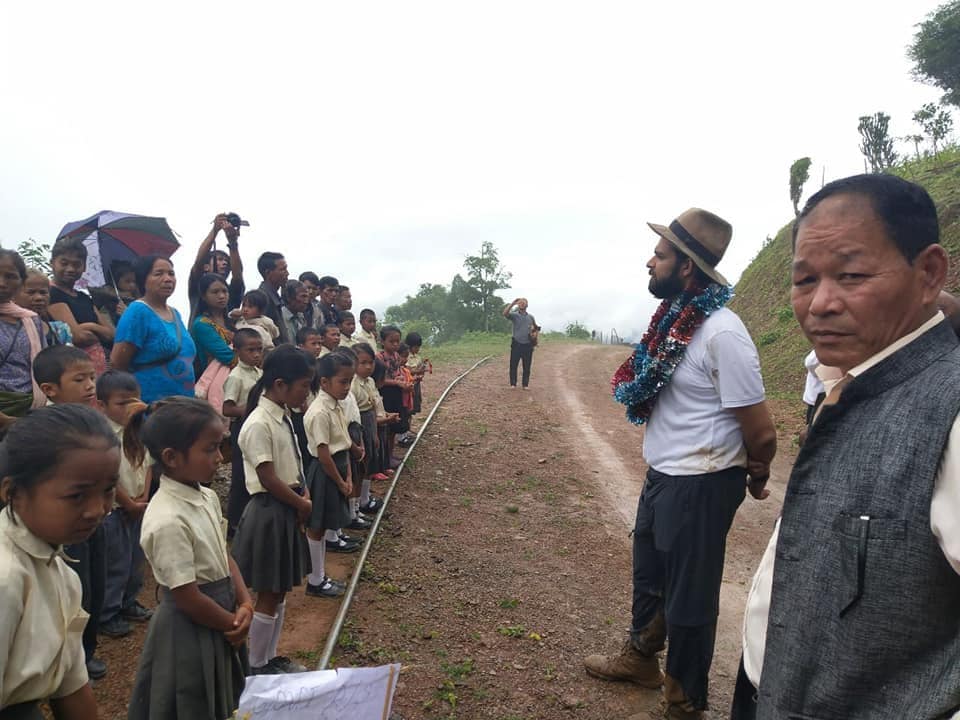 “The PM award did not bring any tangible benefit to the SHG involved, and they feel demotivated,” said Chaudhary while also raising concern on the Anganwadi Centre (AVC) in Tisopi that does not have basic infrastructure.

The Siaha deputy commissioner was all praise for the youth in his district, which is also thought to be the ‘last district of India in Northeast’.

“In Siaha, they have a district wide network of Mara Thyutlia Py (MTP). Another youth organization is the Mara Student Organization (MSO) – the district administration tries to involve them in community building through various schemes. In fact, the Mara community is so strong that they can teach other states a lesson,” said Chaudhary who described his visit to Tisopi as ‘an opportunity to connect with nature despite encountering many leeches’.
Tags Bhupesh Chaudhary Maraland PMGSY Pradhan Mantri Gram Sadak Yojana Siaha