Meet 'The Squad': The four progressive Congresswomen who've been re-elected

Meet 'The Squad': The four progressive Congresswomen who've been re-elected

Representative Ilhan Omar of Minnesota, Alexandria Ocasio-Cortez of New York, Rashida Tlaib of Michigan and Ayanna Pressley of Massachusetts have sailed through reelection.

All four congresswomen — Representative Ilhan Omar of Minnesota, Alexandria Ocasio-Cortez of New York, Rashida Tlaib of Michigan and Ayanna Pressley of Massachusetts have sailed through re-election.

The four women of colour took office in January 2019. Their major advantage has been their active social media presence, thanks to their progressive vote base. But the lawmakers also attracted controversy, mostly over their criticism of the US relationship with Israel.
So what else do we know of the lawmakers known as "the Squad"?
1. Ilhan Omar
Omar defeated a well-funded Republican challenger, Lacy Johnson, who was strongly endorsed by President Donald Trump in May. Ilhan Omar
In a tweet supporting Omar's challenger, Trump had tweeted," I’m endorsing you Lacy, you truly deserve it. You are doing a great job, and Omar is a disaster who wants much higher taxes, hates our Military & our Vets, demands Open Borders, and is fighting to take away our great 2nd Amendment. Good luck Lacy!"
Omar's family first came to the US as refugees from Somalia. After fleeing the country's civil war, they settled in Minneapolis in 1997. The 38-year-old mother of three is one of the first two Muslim women ever elected to the US Congress.
But the US lawmaker did come under the radar of the conservatives in April for her comments on 9/11. The Democrats later clarified that the comments were taken out of context.
2. Alexandria Ocasio-Cortez
Alexandria Ocasio-Cortez defeated her Republican challenger John Cummings, a 60-year-old Catholic high school teacher who raised more than 10 million US dollars. 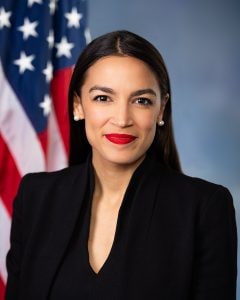 Alexandria Ocasio-Cortez
According to The New York Times reports, Ocasio-Cortez, popularly known as  "AOC", brought in more than 17 million US dollars in campaign contributions. Shortly after the results came out, the congresswomen thanked her supporters in a tweet.
"Serving NY-14 and fighting for working-class families in Congress has been the greatest honour, privilege, & responsibility of my life. Thank you to the Bronx & Queens for re-electing me to the House despite the millions spent against us, & trusting me to represent you once more", AOC said
The 31-year-old lawmaker was born in the Bronx, New York to parents of Puerto Rican descent. She has a degree in economics and international relations from Boston University and worked as a community organiser, educator and bartender before deciding to run for office.
3. Rashida Tlaib
The Michigan Representative Rashida Tlaib, defeated David Dudenhoefer to grab her spot in reelection. Rashida TlaibThe Michigan Democrat made history by becoming the first Palestinian-American woman to serve in Congress. Born and raised in Detroit, Michigan, Tlaib is the daughter of Palestinian immigrant parents. Her grandmother still lives in the West Bank.
Tlaib joined Ms Omar as one of the first two Muslim women ever elected to serve in Congress. According to BBC, the eldest of 14 siblings, Tlaib became the first member of her family to graduate from high school, and then from college and law school.
Tlaib has also been a critic of US President Donald Trump and spoke in favour of his impeachment.
4. Ayanna Pressley
Ayanna Pressley emerged victorious in election race where she faced only the independent candidate Roy Owens, a pastor. Ayanna PressleyCongresswoman Ayanna Pressley is the first African-American woman to be elected to the US Congress from Massachusetts.
The 45-year-old lawmaker was born in Cincinnati and raised in Ohio. She is the only child of a single mother. After assuming office in January, Pressley has been an active advocate of abortion rights, she strongly opposed an amendment that prevents Medicaid from covering abortions for low-income Americans.
A survivor of sexual violence, Pressley has also spoken up for better protections for assault victims. She wrote on her website that "the people closest to the pain should be closest to the power".
For our in-depth coverage of the US elections 2020, check out our LIVE blog
(Edited by : Abhishek Jha)
Check out our in-depth Market Coverage, Business News & get real-time Stock Market Updates on CNBC-TV18. Also, Watch our channels CNBC-TV18, CNBC Awaaz and CNBC Bajar Live on-the-go!