Meet Kamala Devi Harris, a daughter of India and a contender in US presidential race

Updated : January 25, 2019 02:36 PM IST
Kamala Harris, 54, served two terms as District Attorney of San Francisco.
She is also the first South Asian woman to be elected to the US Senate.
Harris, whose mother is from Chennai and father from Jamaica, is quite influenced by India.

Kamala Harris, the India-origin US Senator from California, who has announced a bid to become US president, likes to use three words as an introduction to who she really is: “Tough. Principled. Fearless.” Harris is the first African-American, the first South Asian, and the very first woman to serve as attorney general of the state of California.

Senator Kamala Harris, 54, served two terms as district attorney of San Francisco. Defeating a two-term incumbent, she was first elected in 2003, and was re-elected to a second term in November 2007. As California’s Attorney General, Harris prosecuted exploiters of women and children, and took on human trafficking and gun and drug traffickers.

She is also the first South Asian woman to be elected to the US Senate, and currently serves on the Senate Judiciary Committee, Homeland Security and Governmental Affairs Committee, Select Committee on Intelligence, and the Committee on Budget.

So with her strong commitment to civil rights, it is quite fitting that it was on Martin Luther King Jr. Day that senator Kamala Harris officially announced her bid for the US Presidency, challenging the incumbent, President Donald Trump. With 2020 looming ever closer, several Democratic contenders are throwing their hats into the ring and while many possible names have been floated, the confirmed candidates besides Harris include senators  Elizabeth Warren and Kirsten Gillebrand, and representative Tulsi Gabbard.

It will likely be a crowded and hyper-competitive primary field, writes Business Insider “But her relative youth, identity as a black and South Asian woman, ties to both the Democratic establishment and progressive wing of the party, and popularity on social media have pundits declaring her a front-runner.”

All four candidates are strong, powerful women but to many Indian-Americans, the narrative of the life story of senator Kamala Harris is particularly intriguing. As an Indian friend mentioned to me, it seems surreal for Indian-Americans to now have such a strong possible connection to the White House.

On Twitter, an Indian-American tweeted, “An historic moment for the Indian American community: a major candidate for POTUS sharing a pic of her Indian mother wearing a salwar kameez. She is all of our mothers who wore salwar kameezes back in the day when they were young and new immigrants to this country. Wow. Just wow.” Mother, Maya, and (Kamala Harris outside their apartment on Milvia Street after her parents separated. (January 1970). Picture courtesy: Kamala Harris

Indeed, the old black and white photograph that Harris shared on Twitter is an arresting one -– a young woman from South India sitting on the doorstep dressed in salwar kameez, with a little girl on her lap. Below it, senator Kamala Harris wrote: “Thinking of my mother today. She was smart, fierce, and my first campaign staffer — and I dearly wish she was here with us for this moment. Her spirit still drives me to fight for our values.”

To which a supporter responded: “Smart and fierce are the first two words I would use to define you as well.” Another added: “She is with you in your spirit and your qualities. Know that and let it edify you. I am a supporter of yours because of that ferocity. It's what's called for in these times. Go get 'em!”

Harris, who was born in Oakland, graduated from Howard University and received her law degree from the University of California, Hastings College of Law. She is married to Doug Emhoff and is stepmother to Ella and Cole Emhoff.

As Kamala Harris embarks on her presidential campaign, she has just written a memoir which introduces her to the larger American public and to voters: “The Truths We Hold: An American Journey.” In it, she delves into her Indian roots and shares how her mother Shyamala Gopalan Harris was the fountainhead of her inspiration and values.

Harris, whose mother is from Chennai and father from Jamaica, was quite influenced by India in her growing years as she often visited her extended family. Her grandfather was PV Gopalan, an Indian diplomat. Grandpa (PV Gopalan) and Kamala Harris when they visited him and her grandmother in Lusaka, Zambia. Picture courtesy: Kamala Harris

Education was important in the home Kamala grew up: her father Donald Harris had immigrated from Jamaica and went on to teach economics at Stanford where he is a professor emeritus. Her mother graduated from the University of Delhi at the age of 19 and was encouraged by her parents to pursue higher education at Berkeley in 1958. She earned a doctorate in nutrition and endocrinology and went on to become a breast cancer researcher.

The two met at university and got married and went on to have two daughters together, Kamala and Maya. The couple parted ways early in their marriage and the girls were largely brought up by their mother. As Kamala notes in her memoir: “She had only two goals in life: to raise her two daughters and to end breast cancer. She pushed us hard and with high expectations as she nurtured us. And all the while she made Maya and me feel special, like we could do anything we wanted to if we put in the work.”

Harris grew up in a home which echoed with India’s independence movement. Her grandfather PV Gopalan became a senior diplomat in the Indian government and he and his wife Rajam Gopalan spent time in Zambia after it got independence. 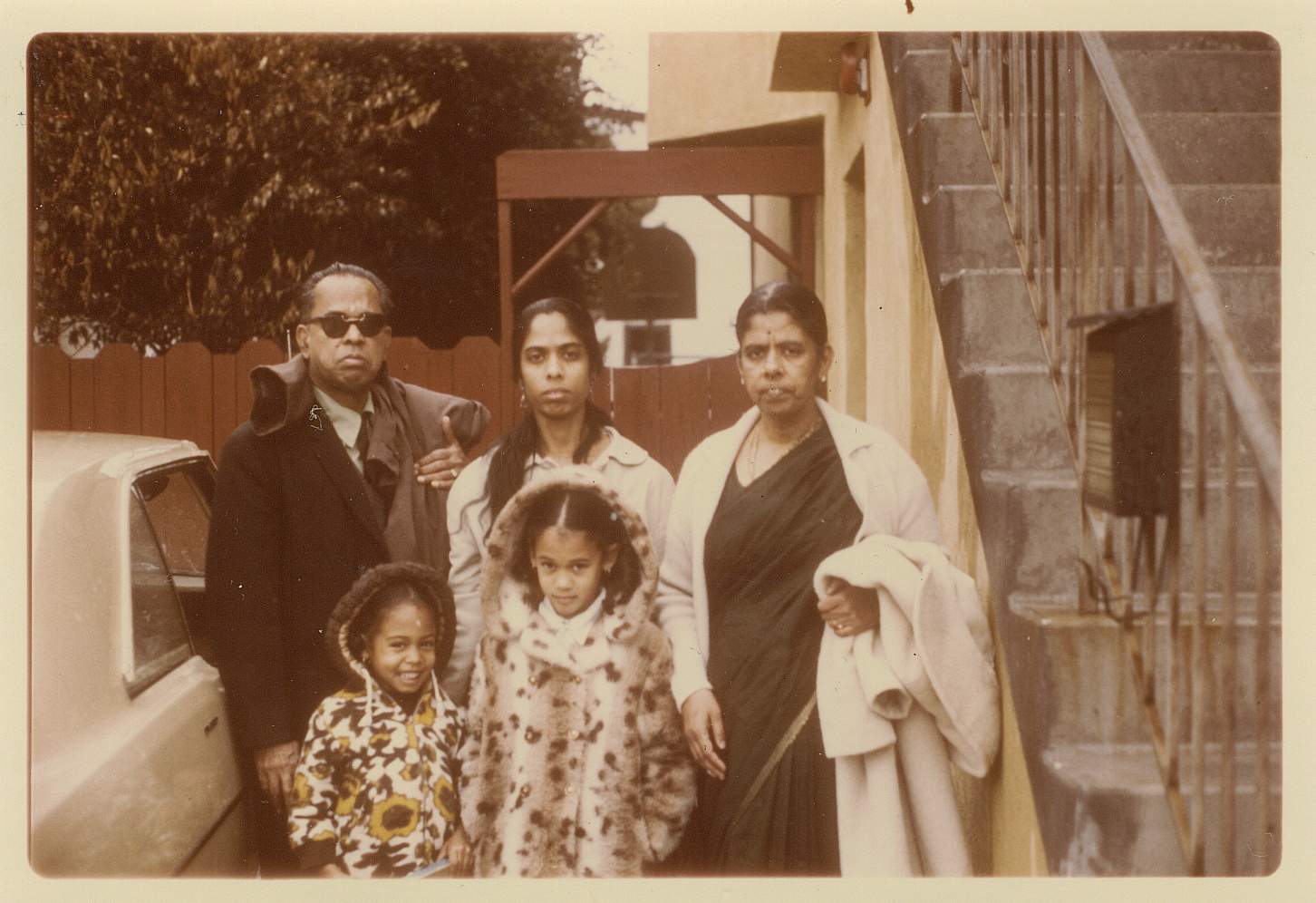 Says Kamala, “From them, my mother learned that it was service to others that gave life purpose and meaning. And from my mother, Maya and I learned the same.”

The Indian extended family was also very much a part of her upbringing even though these uncles and aunts were thousands of miles away. At the same time she writes, “My mother understood very well that she was raising two black daughters. She knew that her adopted homeland would see Maya and me as black girls, and she was determined to make sure we would grow into confident, proud black women.”

There is excitement about Harris’s campaign – she has made it clear she is not taking donations from PACs (Political Action Committees) and on Day 1 raised $1. 5 million online in grassroot donations ranging an average of $37 each in 24 hours. The donations came in from all 50 states and 99 percent of them were less than $250 each. 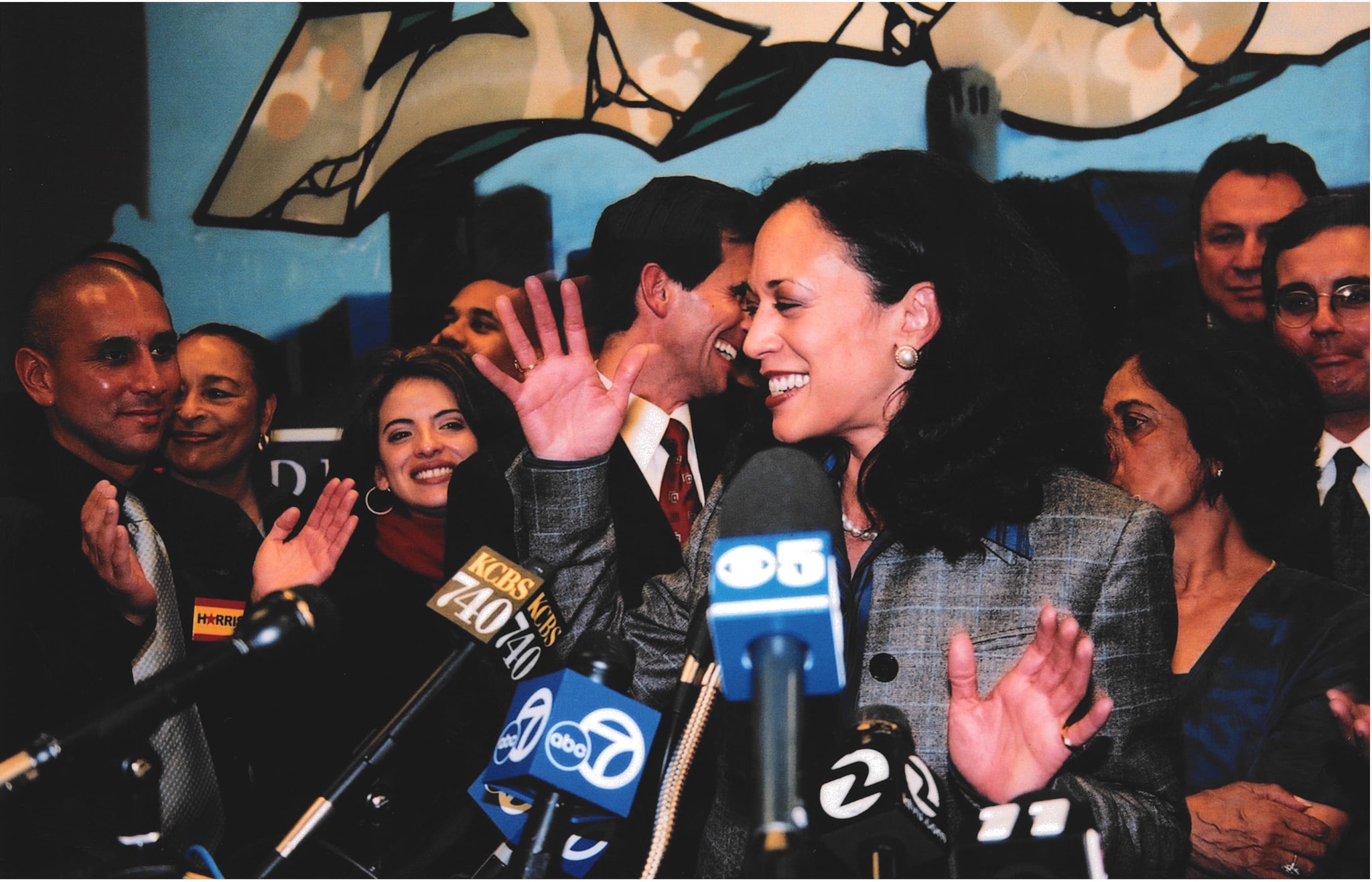 Here is Harris at campaign headquarters, standing before the word “justice,” which volunteers had spray painted on the walls. Picture courtesy: Kamala Harris

Her Indian mother had a deep impact on her, and her memoirs are peppered with anecdotes and quotes from her. One of the things her mother often said had a lasting impact on her: “Don’t let anybody tell you who you are. You tell them who you are.”

Now, at this important junction in the nation’s history, as Kamala Harris stands for the highest office in the land, the challenge will be to convince people who she is and on whose side she is – the people’s side. As she recalls her diverse childhood and growing up years, often as the outsider with no seats at the table, she says:  “But I also knew there was an important role on the inside, sitting at the table where the decisions were being made. When activists came marching and banging on the doors, I wanted to be on the other side to let them in.”

Lavina Melwani is a New York-based journalist who blogs at  Lassi with Lavina.
Tags Democrats India in America Kamala Devi Harris kamala harris US President US Presidential Election US Senate