In an unprecedented action in Indian politics, the Shiv Sena-Nationalist Congress Party-Congress combine on Monday organised a public parade of their 162 supporting MLAs in a bid to disprove the claims made by the Bharatiya Janata Party and its ally Ajit Pawar.

The parade comes barely 12 hours before the scheduled hearing in the Supreme Court on Tuesday morning on the parties' challenge to the new government sworn-in early Saturday morning with Devendra Fadnavis as Chief Minister and Ajit Pawar as Deputy CM, creating a political upheaval in the state.

Abu Asim Azmi of the Samajwadi Party was also at the parade. 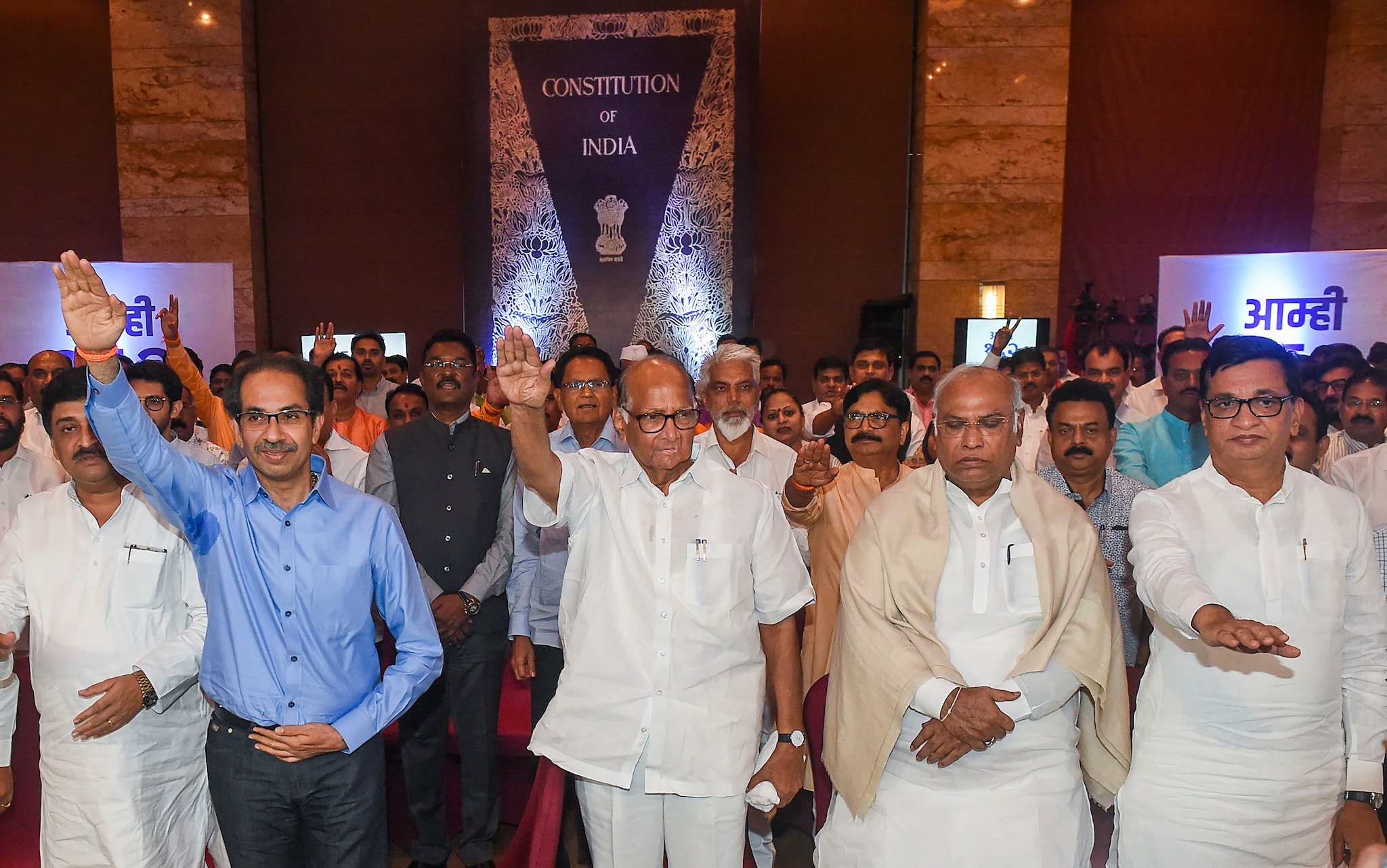 This public parade, including a joint photo-session, comes a day after the top leaders of the three parties address 'cross-meetings' of the legislators of each other's parties, again a unique development in politics.

Earlier, the Supreme Court said it will pass an order at 10:30 AM on Tuesday on the plea filed by the Shiv Sena-NCP-Congress combine seeking a floor test by the Maharashtra government formed by BJP’s Devendra Fadnavis with the support of NCP’s Ajit Pawar. The plea was filed against the Maharashtra governor's decision to swear-in Devendra Fadnavis as chief minister and NCP's Ajit Pawar as deputy chief minister.

A bench comprising justices N V Ramana, Ashok Bhushan and Sanjiv Khanna is likely to pass an order on holding of a floor test. 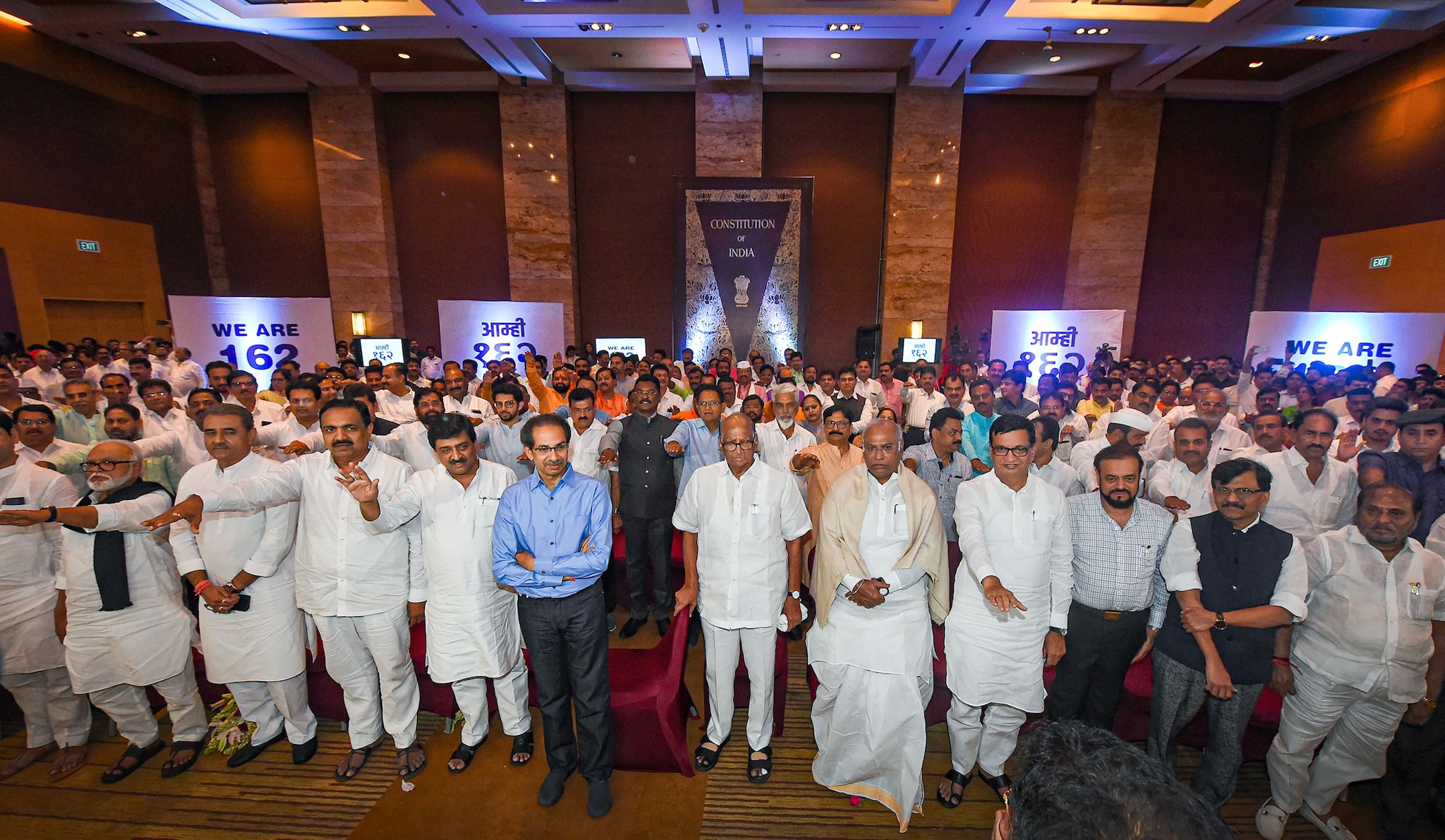 Solicitor General Tushar Mehta, appearing for the secretary to the governor, has presented a timeline of events since the Maharashtra polls, and argued that no party was in a condition to form government since results were announced and the governor had, in his absolute discretion, invited the largest party to form government on November 23.

The apex court, after perusing Koshyari's letter inviting Fadnavis, said it had to be decided whether the chief minister enjoyed majority support on the floor of the House.

Senior advocate Kapil Sibal, appearing for the Sena, opened his arguments and referred to a presser of the three parties, where Uddhav Thackeray was declared the combine's CM face in Maharashtra.

"Where was a national emergency to revoke the President's rule at 5.27 am and the CM being administered oath at 8 am the next morning," he said. "The combine has the affidavits of 154 MLAs supporting it. If the BJP has the numbers, it should be asked to prove majority within 24 hours," he added.

Senior advocate A M Singhvi, appearing for the NCP and the Congress, said it was a fraud of the worst kind and asked whether a single NCP MLA had told Ajit Pawar that he had pledged his support with him for going with the BJP.

As the hearing began on Monday morning, Mehta submitted the letters of the governor and Fadnavis, as asked by the bench on Sunday. The apex court said it was not considering the combine's plea that they be invited to form government. 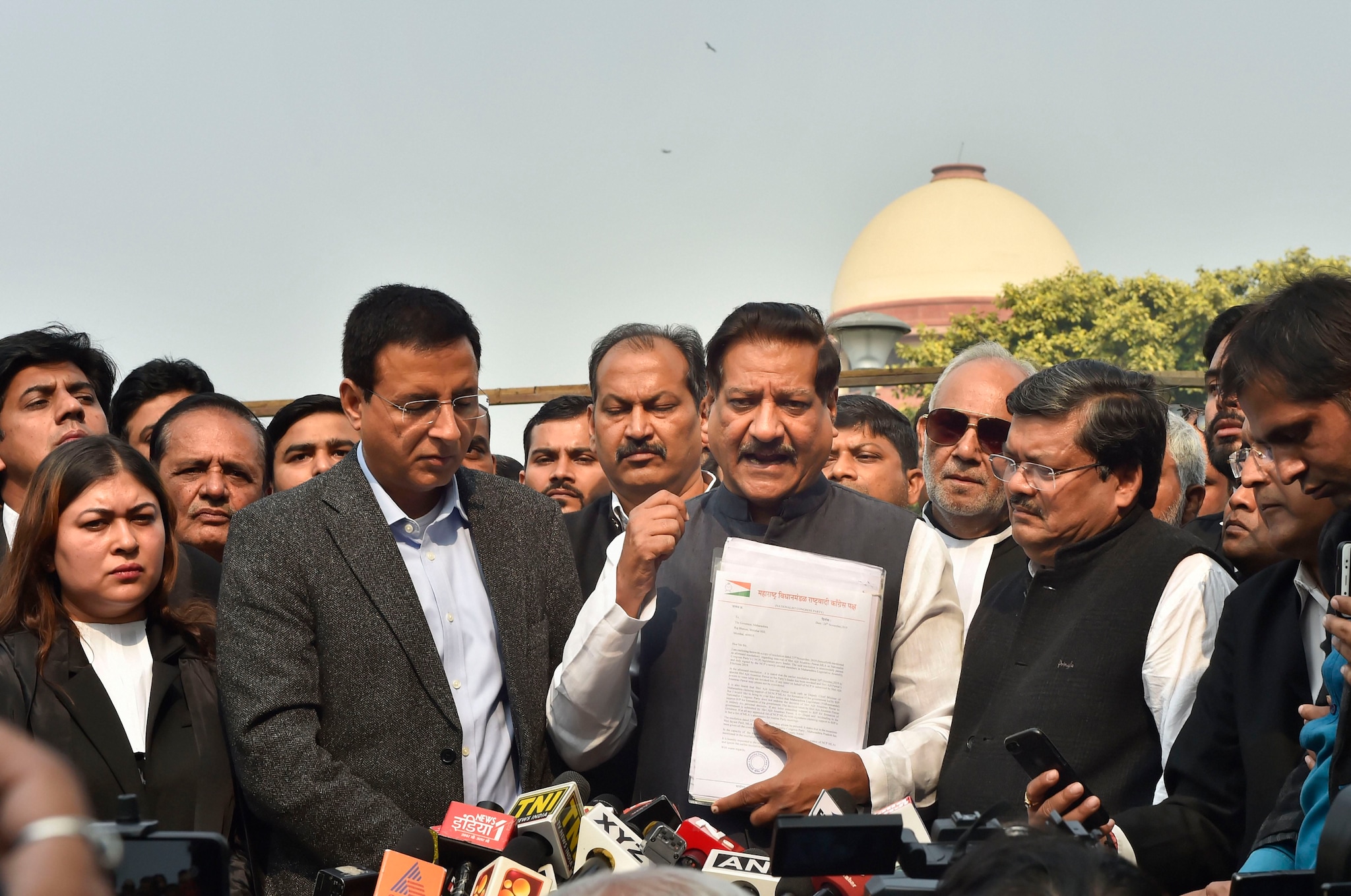 Senior advocate Mukul Rohatgi, appearing for the BJP and some Independent MLAs, said pre-poll alliance partners from both sides had turned foes. He said the NCP, through its legislative party leader Ajit Pawar, had switched over to pre-poll opponent BJP, leaving his uncle Sharad Pawar, who joined hands with the Sena, which was the NCP's pre-poll opponent.

"One Pawar is with me, another Pawar is here in the Supreme Court," he said.

Rohatgi also submitted that the combine was unnecessarily alleging that some kind of horse-trading was going on. "In fact, till Friday, they were indulging in horse-trading," he said.

Mehta and Rohatgi said the governor had invited the single-largest party for government formation a month after the poll results as others failed to muster the numbers.

"Now, the question is that can this court say whether a floor test can be ordered within a particular time frame," Rohatgi said.  "The combine is asking the Supreme Court to decide how the governor and the Assembly should act," Rohatgi said, adding that the court could not interfere with the House procedure, which was regulated by Assembly rules, and that the governor was immune from a judicial review.

Mehta said nobody was disputing that a floor test was an ultimate test and no party could say it had to be conducted in 24 hours. He also questioned whether the apex court could monitor the proceedings of the House, which was constitutionally barred.

Rohatgi said the matter here was fraught with serious consequences and the governor's discretionary power could not be judicially reviewed. Sibal and Singhvi submitted that there was a prima facie case for passing an interim order.

"What was the urgency for revocation of President's rule and giving oath to Fadnavis as chief minister? Is there anything on record to show urgency?," Sibal asked.

"If the BJP has the majority, why is it worried? I am happy to lose on the floor of the Assembly," Singhvi said, seeking an immediate floor test.